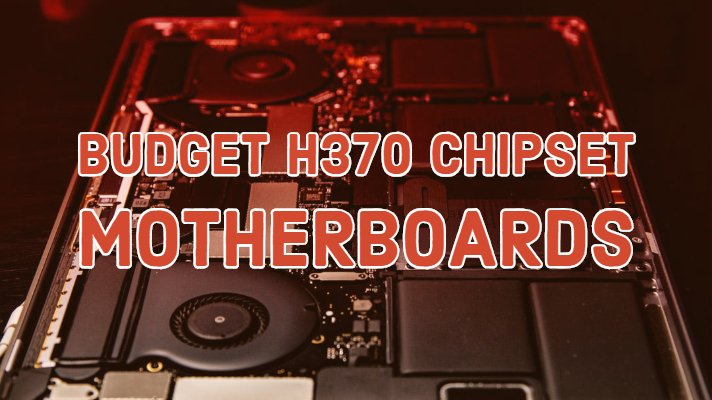 Intel has officially launched the Coffee Lake series chipsets recently. The 300 series chipsets have been what PC enthusiasts the world over have been looking ahead to. They let them make their PCs affordable and capable at the same time, not to mention, an extra number of cores. The new chipsets have been the ideal choice for the cheaper options in the desktop space. Among them, the H370 has been one of the most capable chipsets that offer you the combination of high-end features and the affordability in one single unit. The H370 based motherboards have already been made available in the market. We will check out a few best budget H370 Chipset motherboards for your needs.

Intel, the most the dominant supplier of chipsets for laptops and desktops alike, has recently released a new range of chipsets for the ever-increasing enthusiast market. The H370 and B360 form part of the all-new 300 series chipsets and is designed to work for the motherboards of your 8th generation Intel Core processors. What change do these new chipsets bring in? Well, they tend to bring up fresh air of hardware development and good news for the PC Builders who were waiting for the affordable option for building PCs. These chipsets offer you an alternative option to the costlier, gamer focussed Z370 chipsets.  How do both these H370 and B360 Chipsets compare with each other? Let us examine them in today’s post. 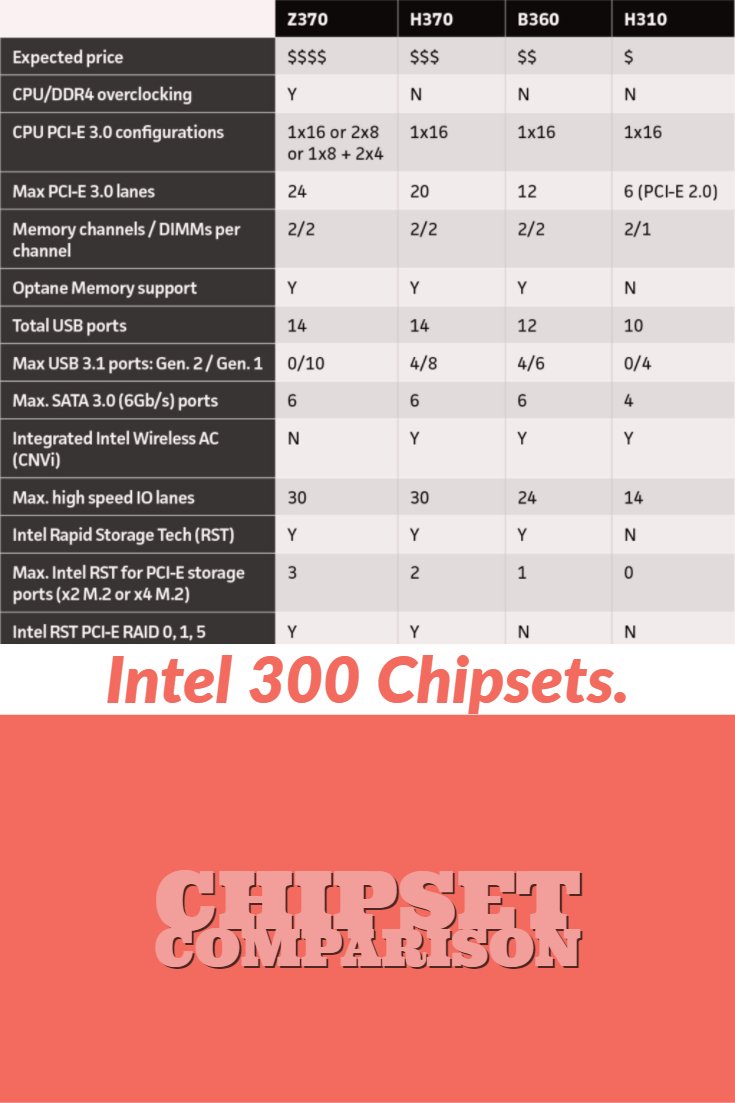 Well, before we can move ahead to find the differences between the two chipsets, we would check out the features and improvements that these two devices introduce. As seen from the table above, both of these were introduced in early 2018 and have common features with a few little differences.

They have introduced the much-needed affordability feature into the chipsets. Both these chipsets have been launched for the Coffee Lake processors. As you might have guessed, you would need to have the new Intel 300 series motherboards in order to use the new 8th gen Intel processors.

What are the features introduced by Intel H370 and B360 Chipsets?

The Z370 was the first chipset that introduced the 300 series processor and has been a flagship in the genre. It offers you overclocking and extra enthusiast features and probably the first that would do so. The H370 and B360 processors have been introduced with a focus on mainstream consumers and business systems. These offer fewer features than those available on Z370.

The new chipsets introduce the integration of USB 3.1 Gen2, thus offering a 10 GB/s USB performance. Gigabit WiFi is another feature that would be one of the excellent options available with these chipsets. Intel has incorporated several main components within the chipset, thus making them genuinely multitasking ready in every capacity.

The Major differences between H370 and B360 Chipsets

We are aware that the Z370 chipsets have been designed as the top standard for those looking for building enthusiast PCs. These support CPU and memory overclocking with ease. They would be able to handle gaming rigs with multiple graphics cards.

The H370 chipsets are just a little less capable, yet much closer to the Z370 option. They are only a minor difference that the chipset does not support overclocking. In more ways than one, the H370 works much closer to Z370.

The B360 cuts a few additional features. Offering affordable options seems to be an underlying reason for the changes introduced. There is a lower number of USB ports in comparison to the H370. Also the number of HSIO and PCI-E lanes. The chipset has on offer USB 3.1 Gen 2, and Optane memory support. These should be the best options for the mainstream computers.

Tabulated Comparison between H370 and B360

A tabulated comparison between the two chipsets should provide you a perfect idea about what these two siblings have on offer for you. Let us check out the chipsets in a side by side comparison

Well, as you would find with the tabulations, both Intel H370 and Intel B360 come with almost identical features. The Intel B360 has cut down a few features and reduced the number of ports to make it affordable.

The new chipsets do come with a few additional features. But, the Intel Z370 has been a flagship chipset in its own right. The new generation H370 and B360 chipsets do not come with a host of features you would find on the Z370.

The H and B series chipsets do not support overclocking. They do not support multi-PCIe lanes across multiple devices. The chipsets have been designed for the consumers and thus focusses on the consumer market, leaving aside the conditions that enterprises may have.

Which one Should I go with?

Well, it all depends upon your requirements. If you are someone on a budget, the B360 should be your prime choice. If you are checking out the options for the affordable, yet functional PCs, the entry-level chipset like B360 would work the best for you. Of course, it does support a few features that are essential for a functional PC. The number of ports has been reduced to make the chipset affordable. In case, more storage and high-speed USB 3.1 ports are what you need, go with B360.

How about the high-end features at an affordable price tag? That is when you would opt for the Intel H370. T is almost equivalent to the flagship Z370 in many ways. The only missing feature can be overclocking. Some classic examples can be full 30 HSIO lanes and native support for USB 3.1 (Gen 2). In fact, the flagship chipset Z370 misses it.

Well, the new chipsets of 2018 have been quite promising, and much looked ahead by the enthusiasts who are looking out for the affordable and functional chipsets for building the mainstream computers. In fact, both these chipsets form part of the Coffee Lake CPUs and offer you an excellent functionality from the consumer point of view.

We assume that the comparison offered through the above paragraphs should go a long way in helping you out in understanding the differentiating factors to a greater extent.

The 300 series motherboards are what you would need if you want to use the Intel 8th gen Intel core processors on your device. The best so far had been the Z370 motherboards. However, it is one of the most expensive and thus may be out of reach for the average user who is looking for the budget desktops with efficiency.

That would precisely explain why Intel has launched the new budget range of 300 series chipsets. The list includes the names like H370, H310, Q370, and B360. Among this new generation of new age chipsets, the Q370 has been the one dedicated to the corporate requirement, while the others are the best options for both consumer and corporate users.

Asus, ASRock, and MSI are a few players who have already started working on the new motherboards incorporating the new 300 series chipsets. Though there have been several motherboards designed on the original series, we will focus on the H370 chipsets for this post.

If you are looking for a motherboard with gaming features, Gigabyte H370M D3H Motherboard should be your prime choice. In fact, it should be one of the cheapest among the H370 based motherboards currently available.

The motherboard comes with all the advanced features and ports for connectivity expected from a gaming motherboard. The technical specifications read as here below –

You can find it on Amazon.

Want to check it out? You can find it out on Newegg.

MSI has been a capable brand regarding the efficient motherboards. The gaming motherboard presented by MSI in the form of MSI H370 Gaming Plus Motherboard is an asset in its genre.

The spec sheet would read as follows – 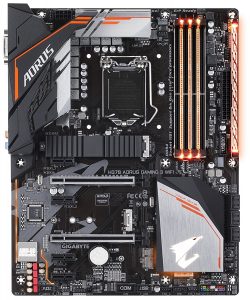 Another excellent gaming motherboard based on the H370 chipset, it offers the same level of performance that you have come to expect from a Gigabyte product.

Another gaming motherboard for the Asus fans, this is the best you would opt for. This motherboard is indeed a feature-rich option for your needs – whether for gaming or the regular day to day usage.

If you want to check out a few features and spec sheets you get with the motherboard, here is what you get –

The motherboard is a little expensive when compared to the other options in the market currently available. Check it out on Newegg.

That should be a formidable list of fundamentally powerful H370 motherboards that can be suitable for basic workloads, and then some. The budget and powerful motherboards in the Coffee Lake series should be quite efficient while being affordable enough. The motherboards based on the 300 series should not disappoint you regarding the functionality that it would offer you.

The motherboards outlined here should go a long way in building a budget and mid-range PCs for most of your needs. Do share your views with us and we would be glad enough to have practically useful feedback from you.