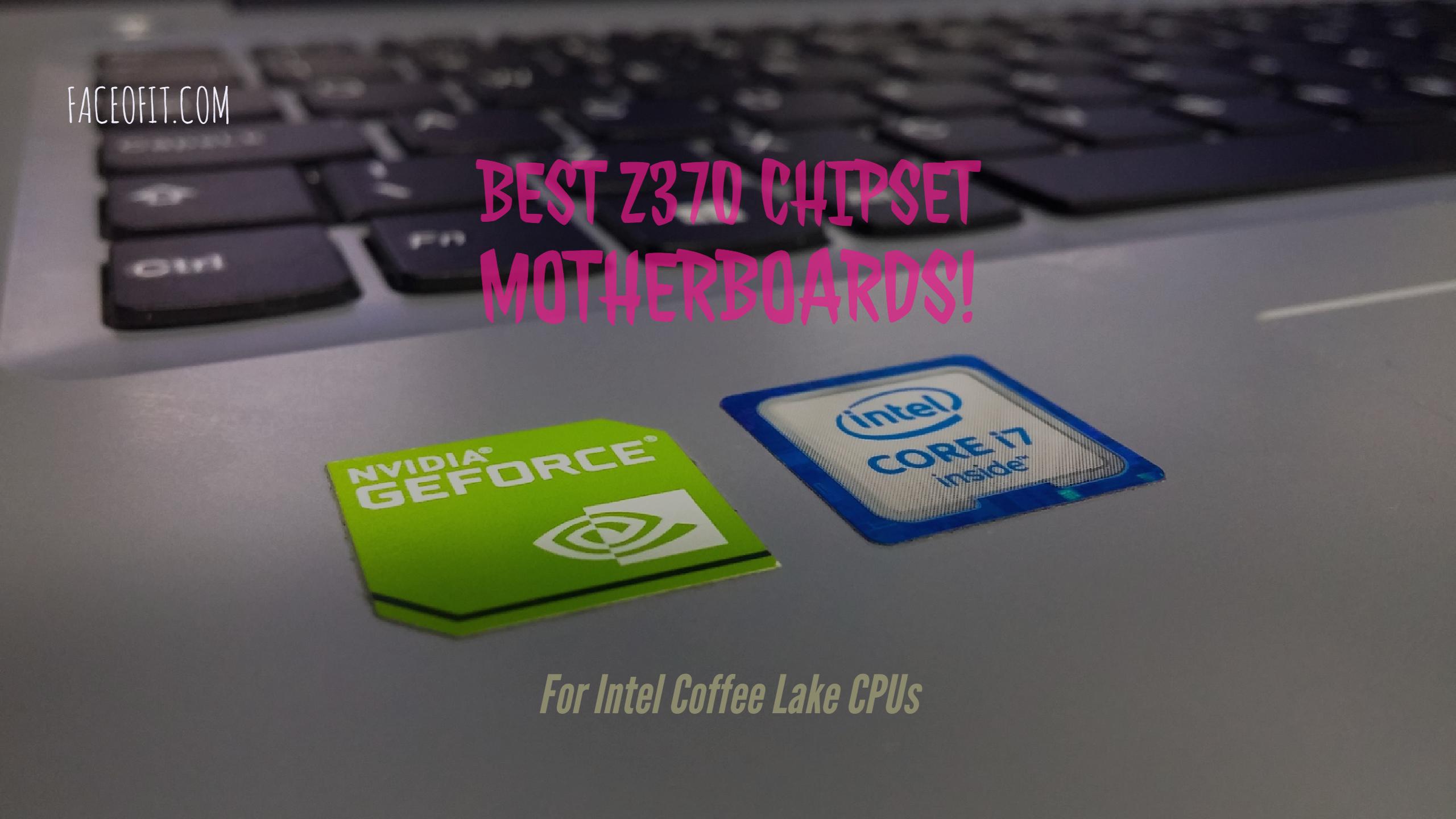 Excited about the new Intel Coffee Lake CPU’s? If yes, then we also assume that need the best Z370 Chipset Motherboards to pair it up. If you have decided to go with the latest generation CPU’s from Intel, you would also need a new 300 series chipset motherboard. Why? It is because Intel’s Coffee Lake CPU’s are not backward compatible with the previous generation 200 series chipsets.

AMD’s Ryzen CPU’s have lit up the gaming and performance desktop markets after almost a decade. It prompted Intel to move the release date forward for its 8th generation desktop CPU’s. The Intel Core i7 8700K is a gaming beast, due to its higher turbo clock (single-core) speeds. It gives you almost 25% to 30% extra performance over its predecessor, the Core i7 7700K. AMD’s Ryzen however, gives you more threads to boost workstation and content creation workloads.

Here is a quick side by side spec comparison table:

Intel unveiling of its 8th generation Core i3, i5 and i7 processor lineup have triggered a Core + Threads war with AMD. This year AMD has already revealed its eight-core processors. Intel is ready with its Intel Core i7-8700K to battle with AMD’s Ryzen 7 1800X.

But this post is not about the processor, but the new motherboards that these processors need. Here we have compiled a list of best Z370 Coffe Lake motherboards for Intel Core i7-8700K. There are plenty of motherboards out there in the market. After hours of research and years of experience, we have picked some of the best motherboards across the price range. 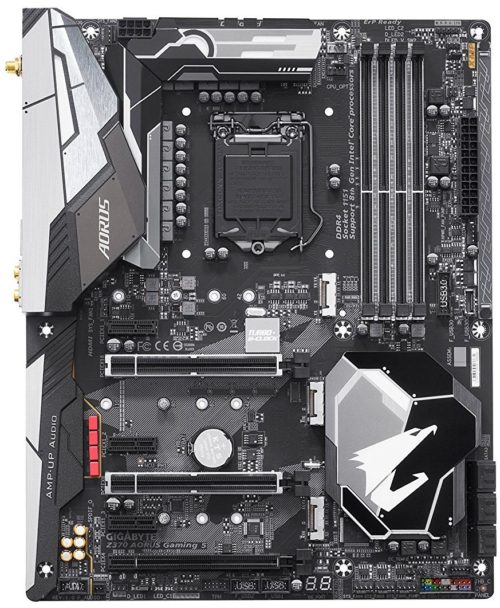 Starting the list with the Gigabyte motherboards, the first one is Gigabyte Z370 AORUS Gaming 7. It supports 8th generation Intel Core processors. It is Intel optane ready too. It features RGB fusion with digital LEDs. Each LED is digitally addressable; users can experience even more patterns, styles, and illuminations.

Aorus AMP-UP Audio offers ESS SABRE with a Digital Audio Converter that is based on the concept of a high-end audiophile sound system design into a microsystem within the motherboard to deliver powerful sound. Moreover, the audio jacks are gold plated to reduce the distortion in the music.

Cooling is more efficient with Smart Fan 5. It allows users to adjust their fan headers that support both PWM and Voltage mode. Smart fans have been introduced in the Aorus Gaming boards to make the motherboard more liquid cooling friendly during the heavy graphics intensive games. 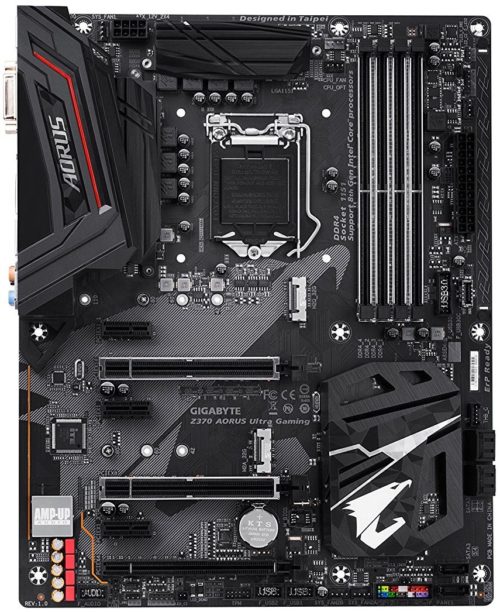 Gigabyte another gaming laptop is same like the above motherboard in most of the departments. It supports the 8th generation Intel Core i3, i5, and i7 processor. It comes with the RGB fusion light that has got even better now, as all the external digital LED strips are digitally addressable.

The ALC1220 is a high-performance multi-channel high definition audio codec with up to 120 dB SNR for clear and crisp audio. Smart Fan 5 users can ensure that your PC remains cool. It features dual PCIe Gen3 x4 M.2 slots to maximize the system potential. Moreover, it supports Intel Optane Memory too to speed up the PC performance at the minimal price. It comes with redesigned armor and thermal heatsinks for optimum performance. 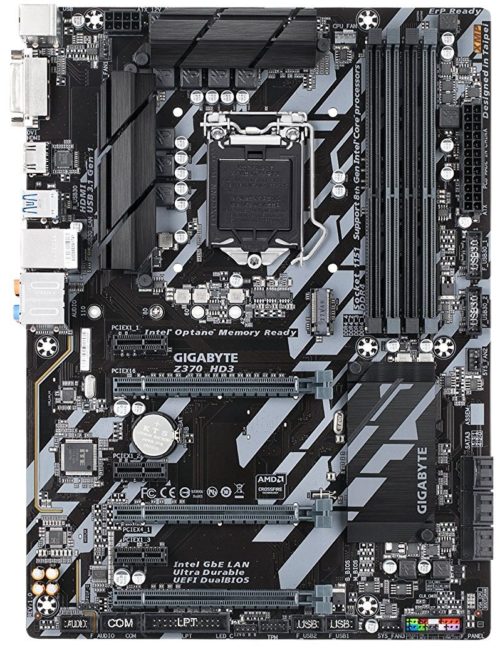 Gigabyte Z370 HD3 Motherboard is somewhat cheaper and affordable Z370 Cofee Lake motherboard for Intel Core i7-8700K processor. It supports 8th generation Core i3, i5, and i7. It features six temperature sensors, four fan/water pump connectors and intuitive UI for fan control. It comes with fast onboard storage with NVMe PCIe Gen3 x4 110mm M.2 (Up to 32 Gb/s) and Intel Optane Memory support to boost up the performance.

It features 4 x DIMM DRAM slots that support up to 64 GB of RAM. Support customizable RGB light strips in seven colors. GIGABYTE Ultra Durable motherboards feature GIGABYTE DualBIOS, an exclusive technology from GIGABYTE that protects arguably one of your PC’s most crucial components, the BIOS. So your PC has both a ‘Main BIOS’ and a ‘Backup BIOS.’ This way your PC is protected in case of BIOS failure. 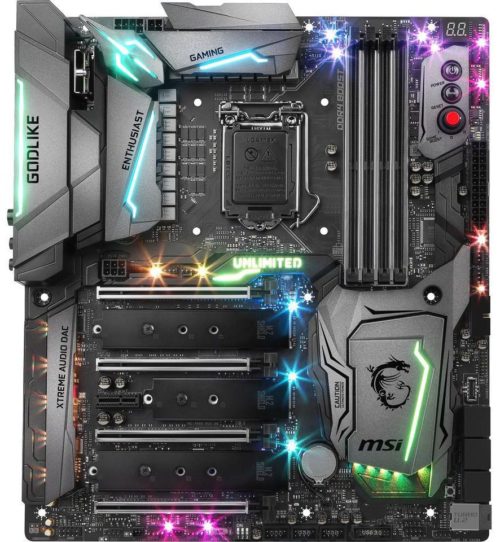 MSI Z370 Godlike Gaming motherboard allows users to customize and set up their color scheme with MSI Mystic Light utility tool. It has enough fan headers with full control to allow you to cool your system any way you want. The MSI gaming motherboard supports all the latest storage standards. You can connect any ultra-fast storage devices.

Experience high-resolution audio with MSI audio boost technology that delivers the highest sound quality through the use of premium quality audio components. MSI ensures the lowest latency to dominate the game with high-quality MSI gaming LAN. MSI Godlike motherboard is designed for limitless tuning to get the best out of Intel Core i7-8700K.

MSI Z370 Coffe Lake Godlike gaming motherboard features a gamers BIOS that contains all the latest options and is easy to use for everyone. MSI MOD HUB offers various designs that will let you to customize heatsink covers, SLI bridges quickly. There is a lot more to say about this motherboard, we have summarized most of them in this easy to understand the table, have a look. 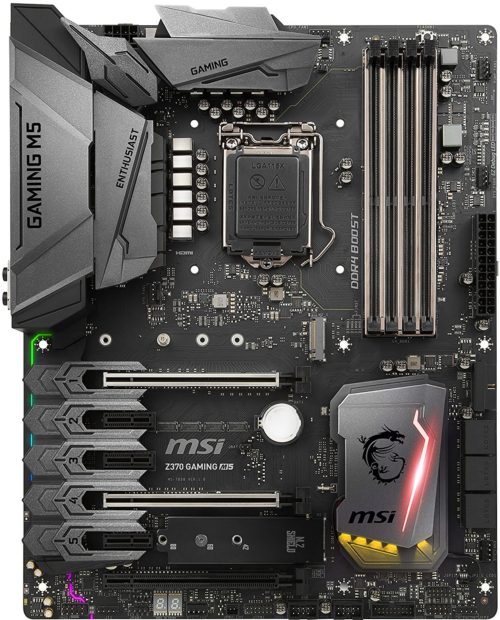 MSI Gaming M5 comes with a unique feel and design packed with exclusive gaming features. Most of the features are same like the above motherboard as both are from the same manufacturer. The difference is in the size, slots and expansion and connectivity capabilities of both the motherboards.

MSI intelligent software and hardware tools specially designed for the gamers will keep one step ahead of your competitors and boost your performance. MSI brings gamers and VR professionals a vivid and realistic experience in which content indeed comes alive. The 7.1 channel surround sound will pull you inside like you are a part of the game, plus the low latency of LAN will ensure a lag-free gaming experience.

Like the above MSI motherboard, M5 gaming motherboard is also designed for limitless tuning to deliver the best performance under the most extreme conditions. With the wide variety of connectivity options, you will enjoy the blazing fast data transfer speeds between the latest ultra-fast devices. 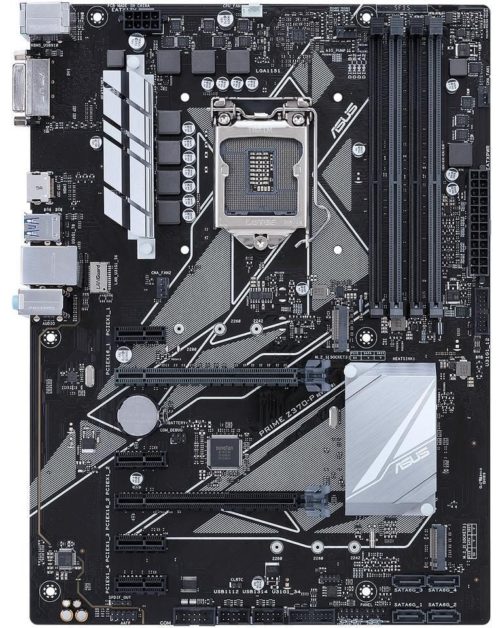 Asus Prime Z370-P support the latest upcoming 8th generation Intel Core i3, i5 and i7 processor. Prime Z370-P is one of the most advanced and most popular motherboards from Asus. It gives a solid foundation to build a powerful gaming machine.  It comes with industry-leading technologies such as automated system tuning, complete cooling controls, immersive onboard audio, and support for the ASUS Fan Extension Card.

Talking about the safety and durability, it comes with LANGuard, overvoltage protection, precise control for stable power and stainless steel back I/O that are corrosion resistant for greater stability. Plus, the flexible cooling controls for air and liquid controlled via auto-tuning mode intelligently will do everything with just a single click.

The smoothest, slickest mouse controllable graphical BIOS has been introduced in Asus Prime Z370-P board to make it even more easy to use and appealing. With EZ Tuning Wizard it becomes pretty easy to overclock the CPU to get the desired performance. You can even configure a RAID array for faster data retrieval and backups 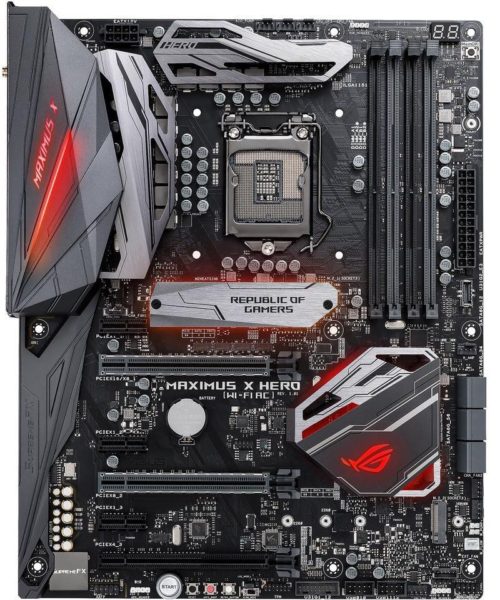 ROG Maximus X Hero is equipped with a stylish, angular M.2 heatsink that keeps your SSD cool. It comes with all the connectivity options that you need. It is equipped with 2x 2 dual-band 2.4/5GHz antennas for up to 867 Mbit/s transfer speed. Plus, the dual PCIe GEN3 M.2 will let your SSD to work at optimum level.

A dedicated base-clock (BCLK) generator that extends CPU and memory overclocking margins. Get the best audio experience thanks to the SupremeFX audio technology incorporated in this board. It has leveled up audio quality, delivering an exceptional 113dB signal-to-noise ratio on the line-in connection. Sonic Studio III for virtual surround sound for VR headsets that draws you deeper into the action. 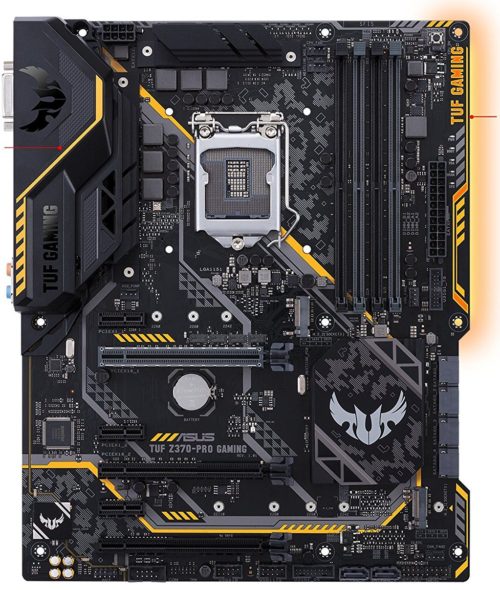 Asus TUF Gaming motherboards are built to survive and thrive on every battlefield whether it is for gaming or heavy workloads. It features exclusive DTS custom onboard audio to create positional cues via stereo headphones to get the shielded and superior sound.

The network optimization software for customizable packet prioritization reduces the lag by 1.45 times with an intuitive user interface. The Asus OptiMem preserves memory signal integrity by routing memory traces and vias to the optimal PCB layer. Also, it improves stability and overclocking with all slots populated.

You don’t need to be a technical expert to do the overclocking; the OC tuner will help you in this with precise voltage control and monitoring. Asus TUF Z370-Pro gaming motherboard supports both NVIDIA SLI and AMD CrossFireX 2-way configurations. Get the ultra-fast data transfer speeds with the USB 3.1 Gen2 and M.2 onboard. 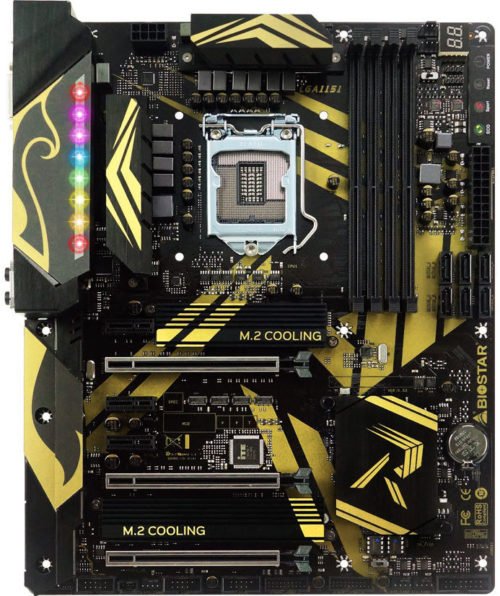 Biostar Z370GT7 is designed to support the 8th generation Intel Core i7-8700K processor along with Core i3 and i5. This motherboard allows PC gaming enthusiasts to customize as per their need. The new BIOS UI boasts much more simply intuitive interface designs and system information bar to show instant computing states.

RACING Z370GT7 motherboard features dual gold M.2 heatsinks featuring ultra-high cooling efficiency to protect the M.2 connector areas. This ensures the extended lifespan of the M.2 slot. With Intel, Optane Memory support refreshes the performance of your PC. The z370gt7 motherboard has a sound sampling rate of 192kHz/24-bit which delivers a high-quality sound. 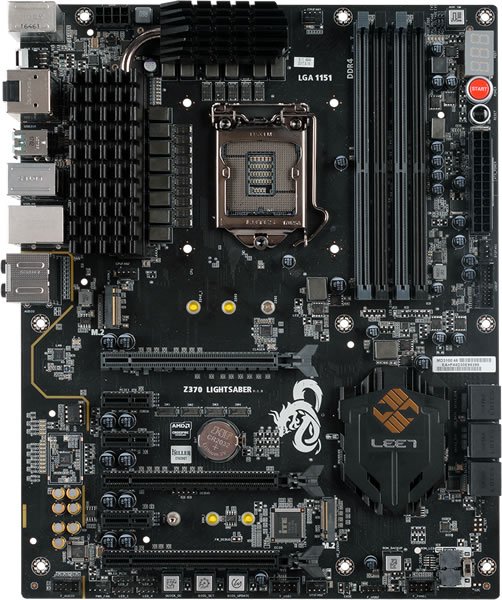 This Z370 board features native HDMI 2.0 and Killer DoubleShot Pro, which balances network load ensuring that you play games and watch HD videos uninterrupted. As far as connectivity is concerned, it packs with 8 USB 3.0, 4 USB 2.0, USB 3.1 Type-A/Type-C connectors, and fast charge your USB devices via an internal USB 3.1 header.

There are three M.2 slots on the board to keep your data blazing fast with NVMe SSDs or Intel Optane devices. Never again compromise with the sound quality, as it has got the Creative Sound Core3D 5.1 Audio. So EVGA Z370 Lightsaber motherboard has a lot to offer at the affordable price.

While the performance and pricing are competitive from team blue, the need for a newer socket due to more number of cores is a bummer. You just cannot drop in an 8th Gen Intel CPU on a Z270 motherboard. You will need a 300 series chipset to support these new CPU’s.

We hope you like our compiled list of the best Z370 Chipset Motherboards available on the market. For questions or suggestions, do use the comment box down below.