Are you excited about iPhone X lookalike Android Phones With notched screen?

Bezel-less smartphones are gaining traction as they represent the front face of our smartphone. The navigation buttons have moved onto the screen, speakers have been slipped down the bottom or shrank in size, and the fingerprint scanner is moved on the back side or into the screen. What is left is the front camera, that can’t be moved down or sideways or at the bottom. So Apple came up with an idea of Notched Screen in iPhone X on to the top side. There is no denying that the notch makes the iPhone X look unlike any other smartphone currently on sale.

Apple’s popularity in the market made the rise of the notch almost inevitable. So here is our list of best Android smartphones that feature the notched display. Some of the phones look like the iPhone X as seen from the front side.

Is a notched display the only solution to tackle the problem? We don’t think so. Samsung has shaved down the bezels in Galaxy S9, and it looks cool. We have seen the Xiaomi Mi Mix and Vivo Apex concept phones, and we love it. They have brilliantly found out the way to deal with front speakers, sensors, and camera. We don’t think those solutions are ideal, but neither is the notch. So it is up to the user which one he or she likes.

Considering the market situation, it looks like notched display will make their space in the market. If you like the Apple iPhone X notched screen, you would be glad to see the Android smartphones with the notched display. Let’s dive right on to the phones list. 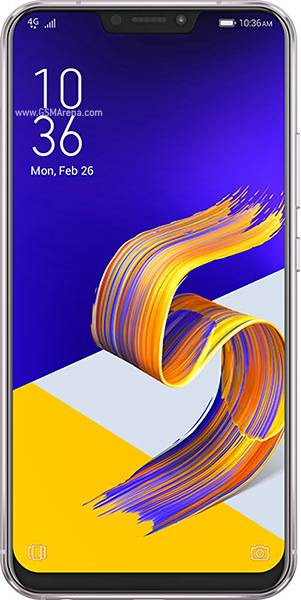 Asus Zenfone 5 was revealed at the WMC 2018, looks like an iPhone X but indeed not the copy of it. Asus Zenfone 5 and 5Z comes with a similar set of specifications and design. The Asus Zenfone 5 runs on Snapdragon 636 SoC. You get the option to choose from 4 GB RAM and 6 GB with 64 GB and 128 GB storage internal storage options respectively. You get a 6.2-inch FHD bezel-less display which has a very odd resolution of 2246 x 1080 pixels with 19:9 aspect ratio.

Its 90% screen to body ratio and 2.5D curved glass on both the sides makes the screen even look better. The notch on the top section is around 25% smaller as in iPhone X. It has the dual camera on the rear side having 12 MP main sensor and 8 MP secondary sensor. The AI-powered 12 MP camera uses the Sony’s flagship IMX363 sensor with 4-axis optical image stabilization. On the front side, there is 8 MP camera which uses a wide-angle lens with 120-degree field of view.

A fingerprint scanner is positioned on the back side which is very easy to reach and operate with one hand. Plus, the Zenfone 5 also gets the Face Unlock feature which unlocks the phone right away by scanning your face. It receives a USB Type-C at the bottom, a 3.5 mm jack for headphones, and Bluetooth 5.0. It features dual speakers with NXP 9874 Smart AMP amplifier for high-resolution audio of 192 kHz and DTS Headphone: X for 7.1 channel surround sound.

Asus Zenfoe 5Z is a more powerful version of Asus Zenfone 5 mentioned above. The looks, design, even size are same. With just one look, you won’t be able to notice which one is 5 and which one is the 5Z.  Keeping aside the same physical appearance on both the phones, let us see what the things that made the Zenfone 5Z a more powerful phone are. It is equipped with Snapdragon 845 SoC, which is so far Qualcomm’s best SoC for Android smartphones. It is available in three RAM variants and storage options. You can choose from 4GB, 6 GB, or 8 GB with 64 GB, 128 GB or 256 GB internal storage capacity respectively. Rest of the things, like camera setup, battery, sensors, etc. are same on both the smartphones. It comes preloaded with Android 8.0 Oreo and is upgradable to Android P. 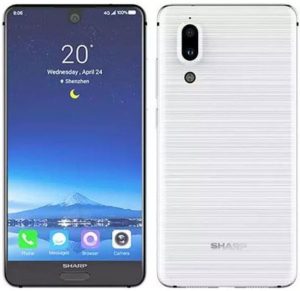 Sharp Aquos S2 might not look as good as iPhone X, but it sure seems better than most of the smartphones. Sharp offers two variants of this smartphone. The premium one is powered by Qualcomm’s Snapdragon 660 SoC while the affordable one comes with Snapdragon 630 SoC. You get the option of 4 GB RAM with 64 GB internal storage with the affordable model and 6 GB RAM with 128 GB internal on the premium one. Memory can be expanded up to 256 GB using the SIM 2 slot.

Sharp Aquos S2 is very lightweight and feels very compact. The front side is almost bezel-less with a notched display on the top of the front camera. On the bottom of the phone, there is a home button with fingerprint scanner mounted on it. It features a 5.5-inch IPS LCD with 420 PPI density and a resolution of 1080 x  2040 pixels. The screen to body ratio of around 80% and powered by a 3020 mAh battery. On the back side, it has dual camera setup with 12 MP and 8 MP sensors with dual-LED autofocus. The 8 MP front camera is beautifully in the notched display. This notched display Android smartphone runs on Android Nougat 7.1.1 OS. 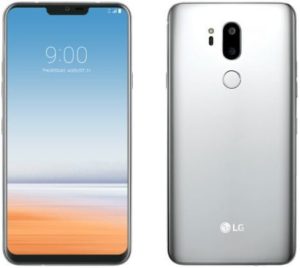 LG G7 as per several leaks will come with a 6-inch ultra-bezel less display with a notch on the top just like the iPhone X. But the notch will be smaller is size as seen in the leaked pictures. The OLED display will have a resolution of 1440 x 3120 pixels resolution. It is codenamed as “Judy.”

It will feature a dual camera setup on the rear side. Underneath the camera, there is a fingerprint scanner. Other rumors say that it will be equipped with Qualcomm Snapdragon 845 SoC. There might be two variants of this smartphone offering 4 GB/ 6 GB RAM with 64 GB/128 GB inbuilt memory. A 3000 mAh battery might power the G7. As nothing much is confirmed yet, so we don’t have much to say about this phone. Soon often you will get to see this beauty with the notched display by South Korean giant LG. 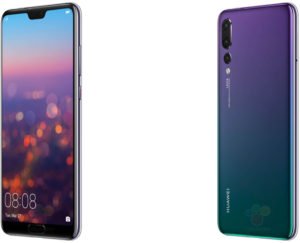 As per the leaks spreading in the tech world, Huawei is launching a lineup of the notched display smartphones which is trending in the market after the iPhone X. As per the latest leaks, we get to know that Huawei will be launching three phones in the P20 lineup having the notch on the top section of the screen. There will be P20 Lite, regular and Pro version of the phone. It is expected Huawei will soon unveil the phones.

The P20 Lite might carry a 5.8-inch  screen with 4 GB of RAM and 64 GB inbuilt storage. The regular and Pro model will bring in a more prominent display of around 6-inch, better processor, more RAM, and storage capacity. Other leaks show that the P20 will have the fingerprint scanner on the rear side and rest two have fingerprint scanner mounted on the front side below the screen. We know that much for now, as soon something new comes up about the P20 lineup we will update this post.

After the OnePlus 5 success, OnePlus is working on its successor. The successor, OnePlus 6 is rumored to be coming with a notched display. It is expected to be launched in the mid of 2018. If you are a OnePlus fan, not much time has left. The OnePlus will come with an ultra-bezel less display pushing the corners even further in a compact body thereby achieving the 19:9 ratio. We are already confident that OnePlus 6 will come with Snapdragon 845 SoC, as SD835 is already powering the OnePlus 5T.

Recently leaked images show a repositioned dual camera array, aligned vertically in the center of the devices. It might come with Android Oreo 8.1 with up to 8 GB of RAM and 128 GB storage capacity. If OnePlus launch this smartphone under $500, it could be the best Android phone under $500.

It is also rumored that Oppo is working on a notched display smartphone which will be the successor of Oppo R11 and might have the name R15. There will be two variants of this R15 and R15 Plus. The R15 will have virtually no bezels. The phone will be very sleek and lightweight, despite having a large display. It might come with a large 6.28-inch AMOLED display with 1080 x 2280 pixels resolution with around 85% screen to body ratio.

It might come with 6 GB and 8 GB RAM options with 128 GB inbuilt storage. It will feature a dual-camera setup on the rear side with 16 MP primary sensor and 5 MP secondary sensor. A 20 MP front facing camera will be mounted in the notched space along. A 3360 mAh battery will power it. If Oppo R15 comes out as rumored, it will have the potential to be the winner in the mid-range Android smartphones.

After Vivo, Oppo has recently launched their F7 phone. Oppo F7 will be the most affordable phone with a notch display just like the iPhone X. Oppo F7 features a 6.23-inch  IPS LCD with 1080 x 2280 pixels resolution at 405 PPI density. Thanks to the notch and ultra-slim bezels the whole screen is easily accessible with one hand. Design wise, Oppo F7 and Vivo V9 look almost similar.

Oppo F7 is powered by MediaTek Helio P60 octa-core processor (4×2.0 GHz Cortex-A73 & 4×2.0 GHz Cortex-A53) with Mali-G72 MP3 GPU. The standard variant will pack 4 GB of RAM and 64 GB internal storage. A special edition of Oppo F7 will also be released that will come houses 6 GB of RAM and 128 GB internal storage capacity. As Oppo and Vivo are selfie concentric phones, you get 25 MP front facing camera that captures fantastic selfies even in low light. Oppo F7 misses on the dual camera on the rear side; you get only 16 MP camera.

A fingerprint scanner is mounted on the rear side. The F7 has not moved to the USB Type-C that we expected. It runs in ColorOS 5.0 on top of Android 8.1 Oreo out of the box. A 3400 mAh battery power up this phone. The Oppo F7 is a bit performance oriented as compared to the Vivo V9 which quite similar to this one.

At this point, we certainly feel that Android Phones With Notched Screen is here to stay for a whole unless something new comes up. I would rather go with the Mi Mix rather than a notch, but that is just me. Looks is highly subjective and the iPhone X’s success surely gave confidence to other manufacturers to dive in.

We hope you like our article. Comments and suggestions are welcome in the comment section below. Thank you for visiting!