AMD revealed a plethora of information regarding their next-generation EPYC CPUs based on the Zen 3 and Zen 4 cores. With the arrival of Zen 2-based EPYC Rome processors, AMD has shifted the server landscape, delivering impressive performance with best-in-class efficiency and value.

With the upcoming generations, we should further expect AMD to uplift the server market with dominant products.

Moreover, it offers up to 64 cores and 128 threads. In the future, AMD might present a custom design with more cores and threads per core. The rated TDP is 120-225W, depending on the processor.

Unlike Zen 2 architecture which consists of 16 MB of L3 cache per CCX in a CCD, Zen 3 features a shared cache of 32 MB+ for each die. Consequently, it allows all cores to share the entire L3 cache existing on the die instead of individual CCX having their unique and smaller cache shared among cores. Milan Zen 3 CPU contains eight cores in a single CCX. 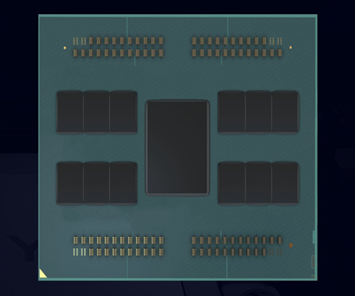 The AMD EPYC Genoa CPUs are an efficient computing platform for the data center segment and HPC. However, they provide substantially more performance and more core density.

These CPUs based on the Zen 4 core architecture were a mystery until AMD formally disclosed them in their last roadmap during the EPYC Rome launch. Launched in 2021, the Genoa lineup will provide even more new sets of features to enhance the server landscape.

With DDR5 support, these CPUs guarantee efficient multitasking and a boost in speed overall. The DDR5-5200 memory support is a significant improvement over the DDR4-3200 MHz DIMMs.

Furthermore, it also supports up to 12 DDR5 memory channels and 2 DIMMs in each channel, allowing up to 3 TB of system memory through 128 GB modules.

The SP5 platform features the latest socket with 6096 pins organized in the LGA (Land Grid Array) format. It is, until now, the most considerable change in a server socket AMD has ever designed. It contains 2002 more pins than the earlier LGA 4094 socket.

The chips include a massive 96 cores and 192 threads. The latest Zen 4 core architecture offers IPC improvements compared to the one with the TSMC 5nm process node.

With an idea to pack more cores in the EPYC Genoa CPU package, AMD incorporated up to 12 CCDs in its Genoa chip. Every CCD features 8 cores that are built on the Zen 4 architecture.

AMD will bring in some great features compared to its mobility and desktop portfolios through its EPYC server processors. If the long-term Zen roadmap flawlessly moves further, AMD EPYC CPUs will dominate every sector of the CPU market.

Which one to choose – AMD EPYC MILAN or AMD EPYC Genoa?

AMD EPYC Genoa Zen 4 CPUs are expected to provide up to 29% IPC uplift than Milan CPUs and a 40% overall enhancement due to implementing other vital technologies.