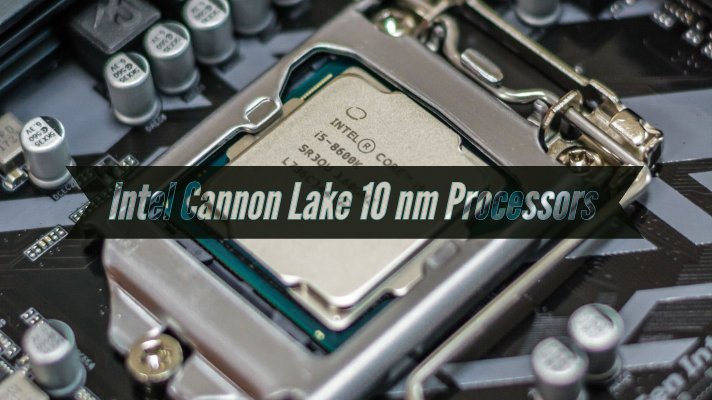 The transistors used in the processors are gradually decreasing in size over the years. That is precisely what has been responsible in making the equipment we carried compact and more portable. That brings us to remember the earliest CPU transistors we used in the oldest of the devices. Not so long ago, they were approximately 90 nm in size. Keeping up with the trend, we now are on the verge of witnessing transistors with minimized design; it is now time for the 10 nm processors. Intel has been teasing about its new series of processors based on the 10 nm manufacturing process, but the technology is being delayed indefinitely for the reasons best known to Intel (Spectre maybe?). We will discuss the Cannon Lake processors in finer details.

Cannon Lake. What exactly is it? Cannon Lake is the codename used by Intel for its range of processors with the 10-nanometre manufacturing process. The 10 nm die shrink will be the new age processor available from Intel next year.

However, the processors have been delayed indefinitely. Intel announced the Cannon Lake processors in 2016. But later all of the planning was pushed back to 2018. Now that the year 2018 is here, there is no sign of Cannon Lake processors as yet. If the current situation is any indication, we may not be able to see any improvement till 2019 is right here.

The History of Cannon Lake Processors

The cannon Lake processors manufactured under the 10 nm manufacturing process were initially expected way back in 2016. For reasons unknown, Intel pushed the release to 2018. The hopes went high when Intel even demonstrated a Cannon Lake CPU at the CES 2017 event. Intel, at this event, announced that the new Cannon Lake processors would be released 2018 at the earliest.

Then in April 2018, Intel stated that they have already been shipping the 10 nm product and the actual manufacturing will begin in 2019. Another update from Intel stated that the production of Intel Cannon Lake processors would further be delayed. The time frame suggested by Intel this time has been around the second half of 2019.

With the above backdrop, it should be evident that the Cannon Lake 10 nm processors may not be easy to come by anytime soon. However, out of nowhere, we have a confirmation that the new 10 nm processor has been made available, though in limited quantities.

Yes, we are talking about the new IdeaPad notebook processor that comes with Core-i3-8121U. Chinese retailers have listed the only chipset with the 10 nm process from Intel and the much famed at that. What’s more – even Intel has listed it on its website.

The new Core i3 – 8121U will be powering the Lenovo IdeaPad 330 and as we already stated, has been listed on the Intel Ark website. The manufacturing process in new enough, but the i3 and the number 8 should stand proof to the fact that the processor is of a lower specification. There is more likelihood of the processor being available on the entry-level range of notebooks.

The Intel Core i3 – 8121U is manufactured with a 10 nm process and comes with two cores and four threads. The clock speed of the processor is 2.2 GHz with boost speed performance of 3.5 GHz. The first cannon Lake processor will offer you both LPDDR4 and LPDDR4X memory options.

One of the other improvements from the days of the previous generation of processors is the improved number of PCIe lanes. The last PCIe lanes were supported at 12 has been up to 16 on the Core i3 – 8121U. One of the missing points we could notice on the Intel website includes the mention of GPU. Intel has always been treaded the route of an integrated GPU, but lack of the allusion is surprising. It has been giving rise to speculations on whether Intel has stopped offering integrated GPU with its processors and opting for separate GPUs in future.

The specifications read as follows –

Interestingly enough, a few listings have indicated that the new Core i3 – 8121U will come with an integrated  Intel UHD Graphics 620. We assume that the things will only be clear once the notebook ultimately launches.

The Importance of 10 nm Manufacturing Process

Even then, Intel has been falling short of the expectation, and it has been detrimental to its prospects. Rivals like Samsung has already perfected the 10 nm manufacturing process. With that backdrop, it is quite unlikely that Intel could not achieve the task. Another factor that can be worrying enough for Intel is that the competitor AMD has already moved to the 7 nm manufacturing process.

Given this perspective, Intel needs to work hard and come up with a resolution for what impediments it is going through.

Though we went with the aim of listing out the best Cannon Lake processors from Intel based on the new 10 nm manufacturing process, sadly enough – we could not find many options available as things stand as of now.

Let us check out the options available once Intel comes up with more Cannon Lake processors in the second half of 2019. We would hope Intel will live up to its promise, at least this time.