In this article, we are covering the best budget B550 motherboards and our recommendations. Since AMD’s budget range of motherboards is often more popular than its flagship (X570) chipsets, we expect good demand for these boards.

The popularity of AMD’s budget motherboard range validates the fact that it fits well with most system builders with minor compromises when compared to the flagship chipsets. The same should go for the AMD B550 motherboards, where ‘B’ stands for ‘Budget.’ The B500 series motherboards appear to be a little old as they come with a PCIe 3.0 interface instead of the newer PCIe 4.0 standards. It does support GPUs and NVMe SSD’s that underpin the newer PCIe 4.0 specs. Have a look at the image below: 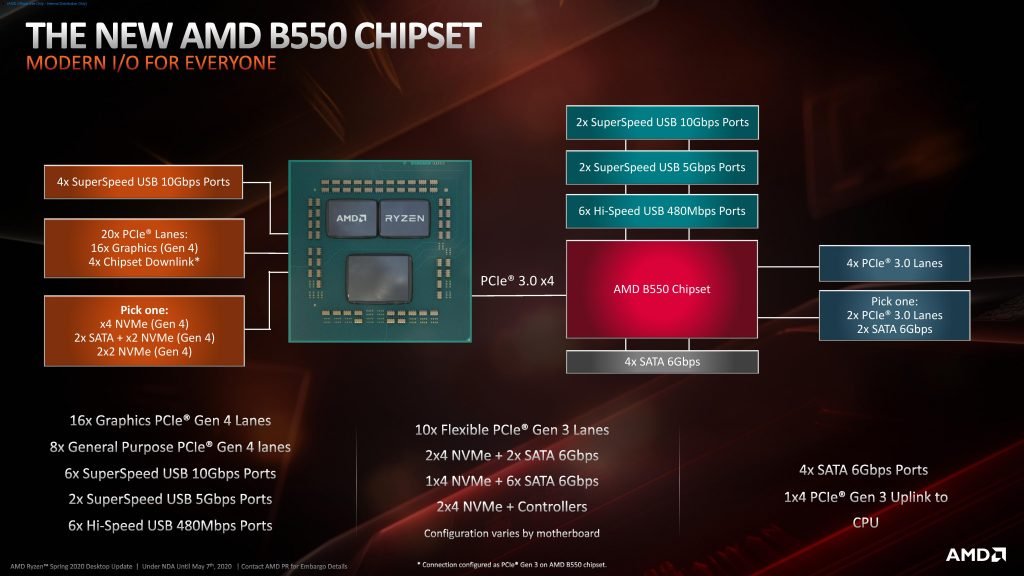 This conclusively should not be an issue, since we expect the budget builds are unlikely to have multiple PCIe 4.0 add-in drives, with exceptions. The x570, on the other hand, had a wide variation of pricing approach that confused many. Due to this, some of the B550 motherboards have started moving in with a higher price tag than the more-affordable low-end X570s.

The current budget B450 boards offer the best value for money currently. However, you need to ensure that the latest firmware is updated, or you’ll need an older generation tray CPU to flash the EFI system.

However, the latest B550 gets a massive upgrade in terms of build quality. For example, the MSI Tomhawk gets a 10-phase vcore VRM featuring 60A Intersil power stages as compared to 4-phase vcore in its predecessor.

On top of that, you get an additional M.2 slot that supports PCIe 4.0 SSDs. The primary PCIe x16 slot supports the newer PCIe 4.0 standard as well. Here are some other features that are supported on the more modern B550 boards. 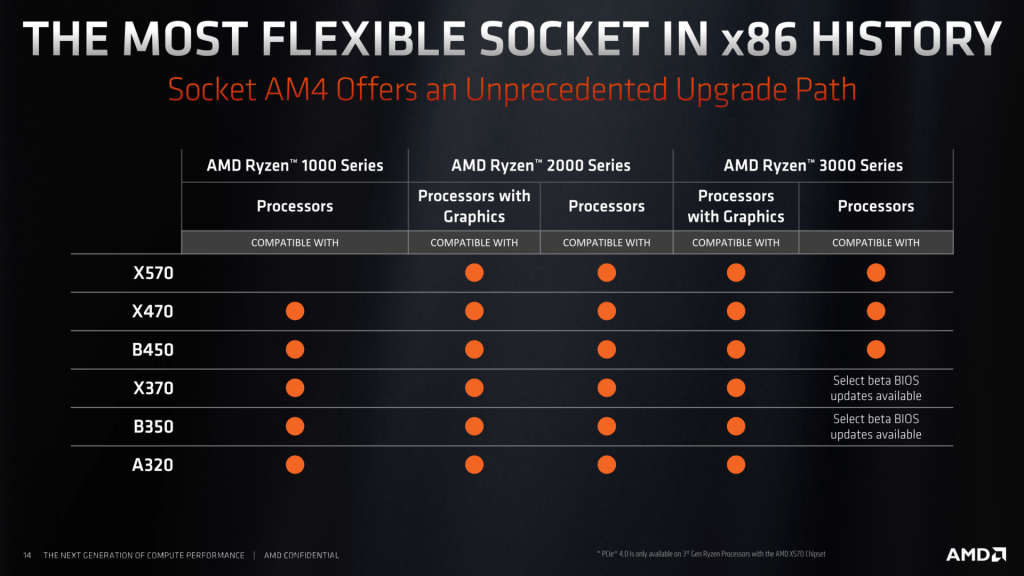 There’s no equating the two generations as they’re in entirely distinct tiers, and pricing reflects that. We would like to think of it as an affordable choice to the X570, in a similar way that the B450 was the budget spin of the X470 chipsets.

The most significant scoring point of the B550 chipset and the thing that segregates it from the B450 is that it supports the PCIe 4.0 interface. That covers both the graphics (GPU) cards and, far more critical right now, PCIe 4.0 SSDs. It also supports NVMe SSDs with a theoretical throughput of 5 GBPS. The B550s also support overclocking and supports SLI & Crossfire dual graphics cards, for what that’s worth, and USB 3.2 Gen 2, which can hit 10Gbps.

In order to separate the B550s from the X570 chipset motherboards, there are a few important variances between the two. The major one is that while pretty much all PCIe interconnects on an X570 motherboard is driven by the PCIe 4.0 standard. However, on the B550, the main connection between the CPU and the chipset still uses a PCIe 3.0 serial interface — your GPU and SSD connect straight to the CPU, which is why these operate faster. Still, everything extra is going to be sharing a limited resource-starved PCIe interface.

This has the computed benefit of reducing the overall power consumption of the chipset down to 5 Watts, rather than 10 W, which means that none of the B550 motherboards come with a chipset fan as standard fitment. Add to that is the reduced IO support. See below:

Well, if you have been looking ahead to build your new PC with the new next-gen processors from AMD, the B550 motherboards should ideally be one of the excellent options ever. So, we will check out a few unique choices for the best in terms of the best B550 motherboards you can go with. 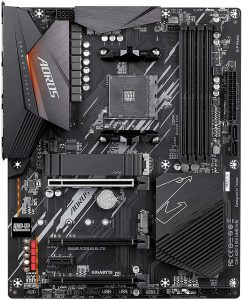 That should be one of the best entry-level B550 motherboards. The motherboard is more focussed on the gaming community. You would find a few notable features on the GIGABYTE B550 AORUS Elite, and a few of them would include a 12+2 power delivery, dual PCIe x4 M.2 slots with one Gen 4 and one Gen 3. The Realtek 2.5 G Ethernet controller should be yet another huge advantage you would find on the platform.

The rear panel of the motherboard comes with a good number of connectivity options in the form of two USB 3.2 G2 Type-A, four USB 3.2 G1 Type-A, and two USB 2.0 ports. The Realtek ALC1200 HD audio codec powers the five 3.5 mm audio jacks and S/PDIF optical output. While the motherboard has almost significant factors, you have always been looking forward to your motherboard. Still, a few features such as wifi and a second M.2 heatsink have been omitted – evidently for reducing the price. You can get access to Advanced Thermal Design with Enlarged Surface Heatsinks. 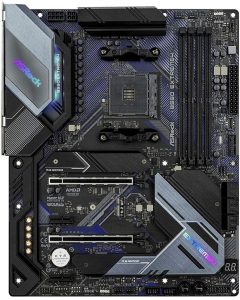 The ASRock B550 EXTREME4 strikes the right balance between several features that include features, build quality, thermal efficiency, and aesthetics. The motherboard comes with 3rd Gen AMD AM4 Ryzen and future AMD Ryzen Processors. The connectivity options are available on the two USB 3.2 Gen 2 (1 is Type-C), two USB 3.2 Gen 1, and four USB 2.0 ports.

The motherboard provides you access to a 14-power phase VRM with 60A power chokes with decent heatsinks. You also have an inbuilt RGB lighting. It gives you access to wifi M.2 slot so that you can get connected to the internal display. The motherboard should be a good option for your needs in high-end gaming and overclocking needs. Yet another added advantage is the availability of power LED buttons along with the error code display that can be helpful in effective troubleshooting. 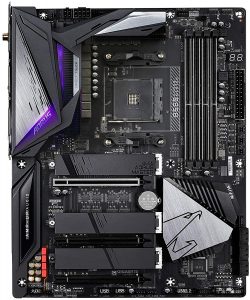 The motherboard from Gigabyte is slightly above our base price but should be one of the excellent budget options with a wide range of advanced features that it offers you. The dual BIOS is one of the huge options we found rather impressive on the motherboard along with the VRM like Gigabyte X570. The support for up to 128GB DDR4-5200MHz memory is yet another huge factor that it offers you.

The network connectivity is offered through Intel 1G LAN and AX200 wifi 6. You would also have access to Realtek 2.5G LAN and ALC1220-VB-Audio CODEC for enhanced performance. The Gigabyte motherboard provides you access to an enhanced efficiency through plenty of connectivity options in the form of two USB 3.2 Gen 2 (1 is Type-C), four USB 3.2 Gen 1, and four USB 2.0 ports. The onboard Clear CMOS and Q-Flash buttons can be the perfect options ever. The Fins-Array Heatsink, Direct Touch Heatpipe, and Thermal Baseplate provide a truly effective and efficient cooling performance. 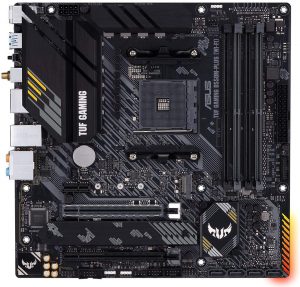 The Asus TUF Gaming B550M- Plus offers you several connectivity options that include two USB 3.2 Gen 2 (1 is Type-C), four USB 3.2 Gen 1, and two USB 2.0 ports. You would also find access to a robust power design with 8+2 DrMOS power stages with high-quality alloy chokes. The motherboard also offers you access to Gaming Audio & AI Noise Cancelling Mic Technology that has been rated to be the industry’s leading performance. 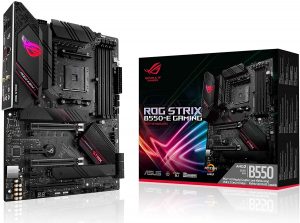 One of the excellent options for providing you with an enhanced experience ever with PCIe 4.0, wifi 6, and 2.5Gb Ethernet. The motherboard comes with two M.2 slots. The slots offer support for the next-generation PCIe 4.0. The Onboard wifi 6 (802.11ax) should be one of the prime options ever for ultrafast wireless networking. You also have access to an advanced Intel 2.5G Ethernet that gives your wired connection a considerable boost.

The robust power design should further be yet another reason we would recommend you opt for the ASUS ROG Strix B550-E Gaming motherboard. The features such as Multiple Temperature Sources, 4-pin PWM/DC Fan Header, AIO Pump Fan Header, and an Enlarged fanless VRM & chipset heatsink are a few features that would enhance the best cooling experience.

Best Budget B550 Motherboards from MSI are as follows:

That was a formidable list of the best options available for the best motherboards among the best budget B550 motherboards. We have made sure to list only those motherboards that have been priced below a budget threshold. You would indeed find a massive number of high-end motherboards that you can give serious thought to if you are looking for the more feature-rich options.

We hope you like our article on the best budget B550 motherboards for AMD’s Ryzen 2 and beyond. In case if you have any comments or suggestions, please do not hesitate to drop us one in the section below. Thanks for visiting us, have an excellent day!