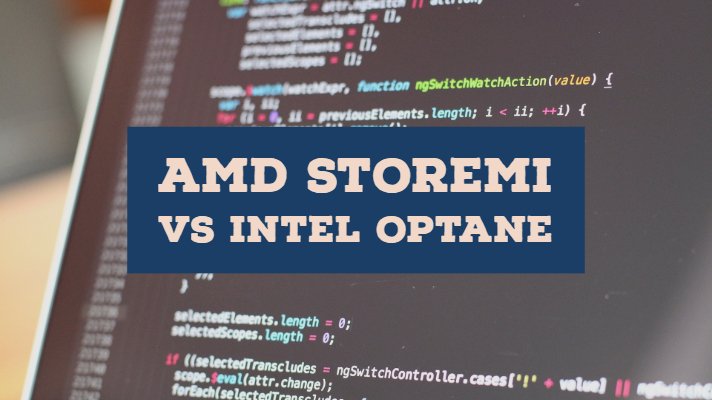 Intel and AMD always time their products with an uncanny similarity and plan their launches almost in a simultaneous manner. That holds true for AMD StoreMI vs Intel Optane as well. What are these two technologies and how do they differ from each other? We will check them out. 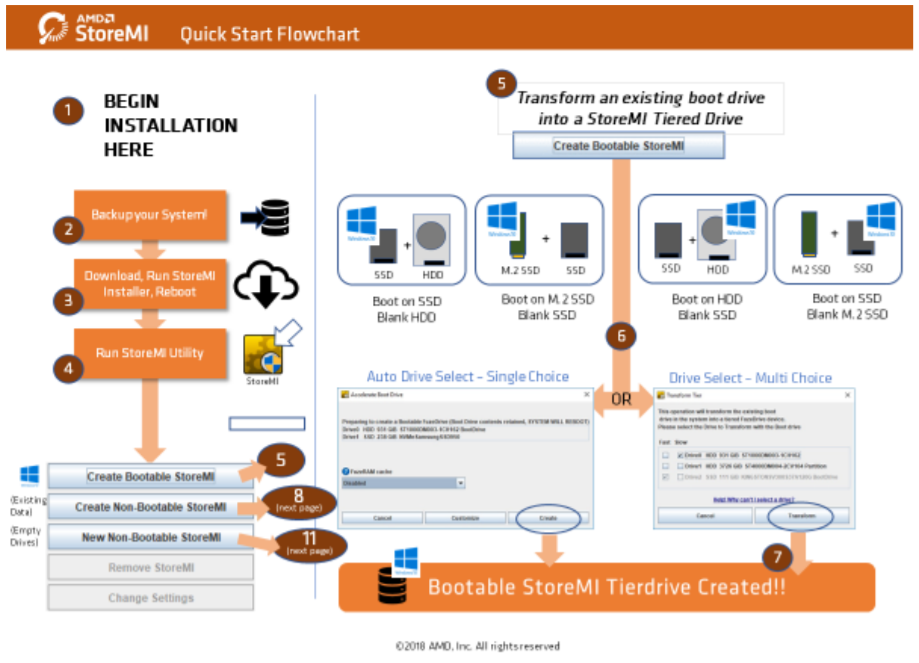 StoreMI from AMD is a Storage Performance Enhancement Technology. What StoreMI stands for Store Machine Intelligence Technology and is aimed at enhancing the responsiveness and speed of traditional mechanical storage devices.

AMD claims that the speed and responsiveness can be enhanced to the levels observed with SSD drives using AMD StoreMI. In fact, SSDs are the fastest option that offers the highest data transfer speeds. However, not everyone can opt for SSDs. They are quite expensive and come with limited storage capacity. On the other hand, the mechanical storage devices offer you a larger storage size and quite affordable at that. But, the data transfer speeds that they offer are quite slow.

The StoreMI technology from AMD combines both these technologies and thereby offers you the best of both worlds. It makes use of advanced machine learning intelligence and uses an automatic tiering technology that analyses the data blocks. The blocks that are accessed most are moved to the faster storage tier.

If you find those details out of reach for understanding, what it means is that AMD Store MI offers you the speeds almost equivalent to SSD speeds. The technology tracks the storage requirements in real time and handles the movement of the blocks between the tiers depending upon the usage.

In a way, both of these technologies offer similar solutions and address a specific issue, storage throughput. While Intel’s solution is a hardware/software one, AMD’s solution is primarily a software offering. 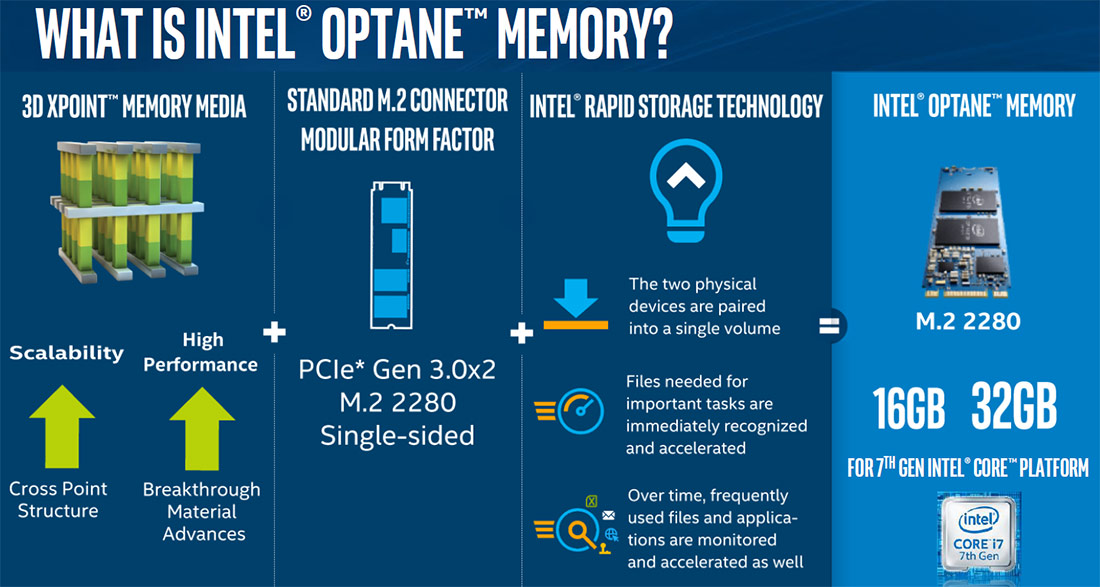 Optane Memory from Intel is a new memory management technology launched recently. Just like the StoreMI technology launched by AMD, even Intel Optane Smart Response memory also works to achieve a common goal. And needless to say, the goal is to provide super-fast memory and better IOPS.

Intel has been continuously introducing better options to improve the performance of your computers and other devices. The latest introduction is Optane Memory. The new technology standard was launched along with the 7th-Gen Intel Core processors. What exactly is Optane Memory? Well, just like AMD’s StoreMI technology, it can be a little confusing to understand it if you are not someone well versed with the memory (memory) technology used in modern hardware.

Optane memory is a new generation of hyper-fast memory modules, combined with caching software. In fact, it can confuse you with the term module. But, in essence, the Optane memory is a memory in itself but is marketed in the form of an M2 card. The memory module can only be used on a compatible motherboard. The motherboards currently supported include Intel 7th generation and 8th generation chipsets. Some examples include the latest i3, i5, and i7 chipsets.

One of the features that make Optane Memory one of the best options is it achieves low latency and high performance. It delivers that by making use of 3D NAND fabrication techniques. The functionality of the Optane memory is all about working as a cache memory bridge. It primarily operates in the form of a bridge between RAM and the physical storage. This ensures a faster data transfer between the components – memory, processor, and storage. In essence, the Optane Memory works as an add-on instead of working as a separate entity. It does not replace any of your components but improves the overall speed and performance. It works as the next generation version of Intel Smart Response Technology.

Intel is planning to offer the speeds almost equivalent to the SSDs with its Optane Memory powered by Intel Smart Response technology.

How Do Intel Optane Memory and AMD StoreMI Work?

Both AMD StoreMI and Intel Optane Memory come with a single objective – offering faster data speeds. Both of them attempt to emulate the performance of SSDs regarding performance and come almost near the speeds. However, they do have a few inherent differences as well.

Some interesting differences include –

Those are a few differences and similarities between AMD StoreMI and Intel’s Smart Response Technology (also known as an Optane memory from Intel). Please note that bot the technologies are designed to work with the same result, but they do have different functionalities and features. We assume the above discussion should ideally help you choose the options that are right for you. Ultimately, they are meant for the same goal.

Before We Wind Up

Well, both AMD and Intel have been attempting to surpass one another in a game of one-upmanship. It should be quite evident from the frequent product launches that they come with and the timing chosen for these launches.

In any case, whether you are opting for AMD StoreMI or ISRT from Intel, it is you as a customer who will end up getting benefitted with an improved performance level – almost equivalent to SSDs. Choose the option that best suits you and share your experiences with us.

Since this article was written, Enmotus has introduced a version of FuzeDrive that now supports Intel Platforms (6th, 7th and 8th Gen Processors), so that Intel users are no longer limited to using the small Optane Modules (we must note that Optane modules are very high quality and work very well with FuzeDrive). Now Intel users can benefit from the latest NVME and SSD technologies and capacities available from all Flash manufacturers.

How To Resolve Unfortunately App Stack Has Stopped on Android Oreo?