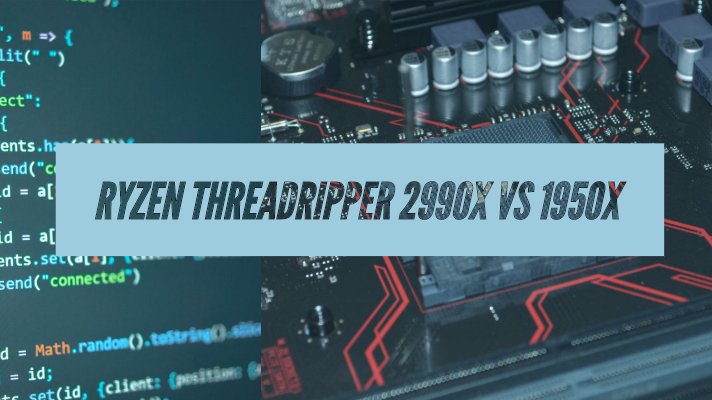 AMD has been at the center of innovation in the recent years, both in the GPUs and CPU segments. The latest one is the highly anticipated 32 core CPU that AMD has long been promising. The specifications for the same have already been leaked. The new offering from AMD is labeled as Ryzen Threadripper 2990X and is set to launch soon. How does it differ from the previous top-end version 1950x? Let us analyze the new offering from AMD and find the differences between the Ryzen Threadripper 2990x vs 1950x in today’s post.

The full specifications of the AMD Ryzen Threadripper 2990x have been revealed. In fact, the company has also announced the specs along with benchmarks and overclocking features as well.

The new offering from AMD will come with 32 cores and 64 threads. The CPU will come with a base clock speed of 3.4 GHz and a maximum boost clock performance of 4.0 GHz. AMD is expected to offer better-overclocking performance with the 2nd generation Ryzen Threadripper CPUs. This is evident from the jump in cores from the previous version of 1950x.

The rest of the specifications include 16 MB of L2 cache and 64 MB of shared L3 Cache. That would be a sum of 80 MB cache per chip. The maximum power would be limited to 250 Watts. You will find two new coolers as AMD has indicated that they will be coming up with a new design of coolers.

The new range of Ryzen Threadripper processor will come with the latest precision boost and XFR clocking. The overclocking improvements have gone a long way in making them one of the faster options.

Ryzen Threadripper 1950x  is one of the popular CPUs in the first generation of Threadripper series. It is a 64-bit Hexadeca-core CPU introduced by AMD in 2017. It is fabricated using the 14nm manufacturing process.

Ryzen Threadripper 2990x vs 1950x – A Comparison Between the Predessors

A tabulated result can be the best bet for a compelling comparison between the two siblings. Of course, the comparison is based upon the specifications available from the varied sources. The exact nature of the specs will only be possible after the processor is launched.

When will the new Ryzen Threadripper 2990x Come?

Well, AMD has made an announcement about the new generation 2 Threadripper CPUs during the Computex 2018. However, there were no official claims about the performance or any other features and specifications.

The results available on the HKEPC site have been considered to be the authentic ones. The specifications we have indicated in the above discussion have been taken from the HKEPC site and other benchmarking websites. The 3DMark Database has recently shown an entry for the HEDT processor from AMD. However, there are no performance figures available from 3DMark Database as in the case of HKEPC.

There are a few differences of opinions. The 3DMark Database entries show the base clock speed as 3 GHz and a boost clock speed as 3.8 GHz. This is in contrast to the 3.4 GHz and 4.0 GHz respectively. However, we would believe the values represented by HKEPC, because the first generation of Threadripper CPUs had the 3.4 GHz and 4.0 GHz. We would expect AMD to hit that minimum of those values.

Another difference between the leaks available from HKEPC and 3DMark Database is the TDP. The TDP as available on HKEPC is 250 W while 3DMark Database indicates a TDP as 180 W. Everything will be clear when the service launches in the third quarter of 2018.

The CPU has been launched on a few sites already. One such website is Cyberport. It lists the Ryzen Threadripper 2990X is listed at $ 1509. We are not sure whether this price is indeed genuine. If it is, we would indeed conclude that the pricing is entirely competitive. The approximate cost is estimated to be around 500 Euros lesser than the HEDT flagship from Intel.

There are two-second generation Threadripper CPUs coming up if we can believe the speculations being available – 2970x and 2990x. We expect both the new generation CPUs based on the Zen+ architecture to come up with a host of optimization options. We would expect the availability of XFR2, Precision Boost 2, and AMD SenseMI technologies on the new Ryzen Threadripper 2990x. We also can confirm that there would be two SKUs at launch. They are as follows:

However, the exact features and specifications will only be available when the product is made available. Until that time, we can just be dependent upon the speculations. So do the comparison between 2990x and 1950x. However, we expect the predictions to be accurate as we can find they are quite realistic.

Let us wait till the third quarter of the year to find the exact features of the AMD Ryzen Threadripper 2990x and how it compares with the 1950x regarding its features. Till then… let us keep speculating..!