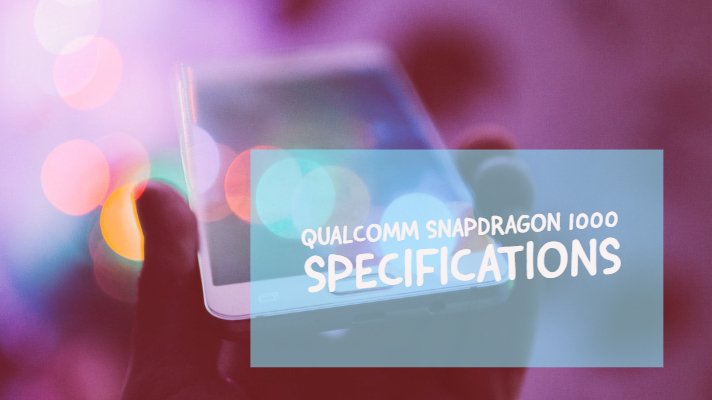 Qualcomm has been one of the prominent players in the arena of processors for mobile devices. They have been launching new processors almost every year in its flagship genre. However, the company has recently been focussing on the laptop processors and has plans to disrupt the current market position held by the clear leader Intel. The year 2018 saw the launch of Snapdragon 845. There are rumors of the new Snapdragon 500 series as well for this years’ launch. However, there are an exciting news making rounds in the technology circles. Yes, we are talking about the new Qualcomm Snapdragon 1000 specifications.

Having tasted success with the processors for mobile devices where Qualcomm has been the undisputed leader, the manufacturer is looking at an option for the launch of laptop processors. The Snapdragon 850 is an excellent example from that perspective.  This will now be followed up with Snapdragon 1000.

The attempt so far has not been extremely fabulous as things stand as of now. The laptop processors from Snapdragon have been found to be excellent with their battery performance and connectivity functionality, but still, there are several areas that they lag behind X86 laptop processors that have long been used in almost all significant laptops. Qualcomm is looking to solve these issues with the new Snapdragon 1000 processor. If the specs available through rumor mills are to be believed, we can expect it to be a performance powerhouse.

What Do the Specs Read?

The chipset is quite more prominent enough with a 20mm x 15mm form factor. The power requirement of the processor is said to be 12 Watts. Wait that is not all – the processor is believed to be offering you a 16 GB RAM and 256 GB RAM of storage capacity.

Qualcomm should be able to meet the power requirements with that specification; however, the issue would be with software optimization. Laptops have been traditionally powered by the X86 processors since long and changing over to a mobile processor may not be an easy task as such.

The processor is believed to be the direct competition to the Y and U series options available from Intel. They have a power value of 4.5 W and 15 QW respectively. The test processor has been observed to offer two 128GB UFS flash drives. You would also have access to 802.11ad gigabit Wi-Fi, gigabit LTE, and a nontraditional power management controller. The chipset will be available in the form of socketed option to PC, instead of soldered possibilities. It has been constant. The architecture used for the processor is expected to be based on ARM’s Cortex-A76 architecture. Rumors also suggest that they are likely to be manufactured using TSMC 7nm process for manufacturing. As for the clock rates, we expect it to be around 3.30 GHz.

What Does the Future Exactly Hold?

Well, the focus for the Qualcomm seems to be beating Intel in its territory. Qualcomm has been attempting to come up with multiple options for the notebooks with Qualcomm processors. They could indeed overthrow Intel from the position that it holds at current times.

Asus has already come up with an announcement of their new laptop powered by Snapdragon 1000. The device expected to make a launch sometime later in 2018 and will feature a 2K resolution coupled with support for the latest ultra-fast WiGig standard.

The updates about the specifications come from the German website, WinFuture. If the rumors come true, it will be the second processor that Qualcomm has presented for the laptop. The Snapdragon 850, which is the first laptop processor to hit the market from Qualcomm, is higher clocked and well optimized for Windows PCs.

If the rumors indeed materialize, the smaller form factor would be quite beneficial in the long run. The devices will be lower than what we find as of now and will need many affordable cooling options. You will also stand to gain better battery life.

However, it would be advisable to take all these with a pinch of salt – or with loads of salt, shall we say? There has been no official announcement from Qualcomm as yet. Until the official statements are made, we may not be sure how accurate these claims will come into reality. In any case, if these rumors come true, Qualcomm can be the fierce competitor to Intel in future.

Well, these are just rumors and need to be taken as that only. We are waiting for an official confirmation from Qualcomm about the actual specifications for the new Snapdragon 1000 processor and its launch. Until that happens, we would consider the speculations as speculations alone and would not make any commitment as to the final specifications.

New details about the Qualcomm Snapdragon 1000 chipset have been continuously surfacing. Whatever be the specifications, we are sure of one thing in any case. Qualcomm is readying itself to take Intel head-on with its new range of chipsets explicitly designed for the laptops and notebooks.

We would like to see Qualcomm and Microsoft work in close quarters and develop a long-lasting partnership. The connectivity functionality and the battery backup on the Snapdragon laptop processors have been quite impressive as things stand as of now. If we could see the same level of functionality regarding performance as well, we would indeed consider it to be one of the best solutions we would be able to opt for.

What is your take on the future of Qualcomm processors when it comes to the laptops? Will they be able to beat Intel in its game? Share your thoughts and inputs with us. Anyways, till the official confirmation from Qualcomm arrives, let us keep speculating!