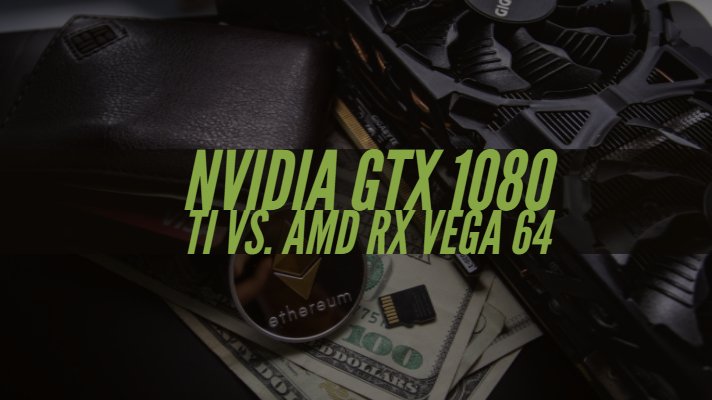 Graphics cards hold great importance whether it is gaming, mining or 3D modeling. Today, we are talking about two of the best GPU processors available out there in the market, Nvidia GTX 1080 Ti Vs. RX Vega 64 from AMD. We will cover every technical detail and compare them side by side so that you can understand how these GPUs differ from each other. We have picked up following models based on GTX 1080 Ti and RX Vega 64 for comparing the specs of these graphics processors:

Before we jump right into the side by side comparison of these two cards, let us first understand the key differences between GTX 1080 Ti and RX Vega 64 graphics processing chip. There is no clear winner here. In some perspective Nvidia GTX, 1080 Ti is better, while Rx Vega 64 beats it in other workloads. So we will also have a look at what makes these cards better than the other and in what scenarios. So without any more delay, here we go:

The two tables above might have given you an idea about what makes each GPU better than the other. Still, we decided to include the following table, which describes the main difference in key features between these graphics processors:

From the above side-by-side comparison, you should have a rough idea about how these graphics processors differ from each other. Now, let us compare to GPUs based on them side by side. As we mentioned at the beginning of the article, we have picked Nvidia GTX 1080 Ti Founder Edition (based on GTX 1080 Ti) and XFX Radeon RX Vega 64 (based on RX Vega 64) for this comparison. It will make you understand the main differences in the two models. Here we begin:

As we can see, the only difference here is the boosted clock, and Cuda core and stream processors count. However, the difference in the boosted clock is pretty novice. Nvidia offers 36 MHz more on boosted clock compared to XFX Graphics card. However, XFX offers 512 more stream processors compared to Cuda cores count in Nvidia GeForce. Moreover, Nvidia offers the new DirectX 12.1 API support, which is missing on the XFX. Do note that the GPU supports 12.3 features, however, some features not supported that drives them not to be DTX 12.1 compliant. Rest of the things are pretty much the same.

There is a huge difference of almost 3 GB in the total memory size these graphics card offer, as Nvidia is offering 11 GB, while XFX Radeon does only 8 GB. Moreover, the bus width of XFX is about 1732 bit wider compared to Nvidia GeForce. The difference in memory bandwidth is a novice. XFS Radeon uses HBM2 technology while Nvidia GeForce GTX 1080 Ti uses GDDR5X SDRAM. Note than HBM2 is better since it can be compressed at higher levels and it’s a bit faster too. However, we are not sure if VRAM speed matters while gaming.

As the table implies, most of the specs here are similar. However, XFX has a wider range of video adapter features including AMD Liquid VR technology, True Audio Technology, VR Ready Premium, etc. Moreover, It lacks support for DirectX 12.1 API. Here you might easily not that Nvidia supports wider external resolution than XFX Graphics card.

Nvidia Founder’s addition has confirmed to be working with most of the modern Windows operating systems including Linux and FreeBSD. However, it is still not confirmed if XFX works with Linux. Moreover, there is hugely different in the required power supply as Nvidia requires only 250 Watts while XFX requires 750. It is quite considerable as the performance of XFX is superior over Nvidia.

We hope this post helps you to understand how these GTX 1080 Ti and RX Vega 64 Graphics processors differ from each other and help you to choose the right model for yourself. If you have any query or suggestion, feel free to use the comment box below.