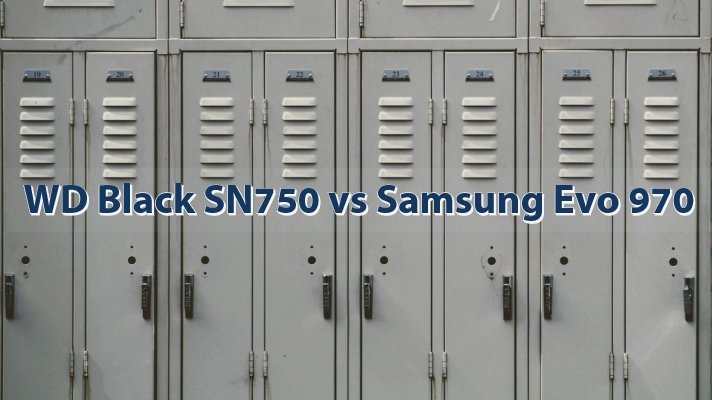 If you are on the lookout for a mid-segment SSD, you should check out our WD Black SN750 vs Samsung Evo 970 SSD comparison.

A few players have monopolized the SSD market, and Samsung has ideally been one of the key players in this context. However, other players are not far behind. Of course, the Samsung EVO 970 has been a leader when it came to the heavy workloads and retained its leadership position to a considerably greater extent. Not to fall too far behind, Western Digital has introduced its new SSD series in the form of WD Black SN750. How does the WD SSD compare with the Samsung offering? We will check out the intricate details and compare the two SSDs for a clear understanding.

The SSD market has become crowded enough with the options available from Corsair, Adata, and Seagate. Now that WD Black SN750 is added to the list will leave WDs mark in the SSD arena. The affordable price tag is one of the positive points that should put the WD Black SN750 on the forefront.

The 1TB WD Black SN750 NVMe SSD offers you the sequential read and writes speeds of 3470 and 3000 MB per sec respectively. It should indeed be a little bump from what we had on the previous generation of WD Black SSDs. From that perspective, it should call itself a direct competitor to the Samsung Evo 970 Pro rather than the Samsung Evo 970. Then there is a new firmware driving its new SSD that may bring in further performance improvements.

One of the best options we observed with the drive is automatic reskinning to the dark theme when booted up. The interface has become more dynamic and offered you a Gaming Mode that helps eliminate latency and prevents the drive from idling.

When it comes to the performance, the sequential write speeds were found to be amazing enough. The drive offers stiff competition to other options available in the genre, including Samsung Evo and Samsung’s Pro series.

The WD Black SN750 should ideally be the best option for those professionals in the media arena and creative creation fields as it offers the best performance for those spheres with the faster writing performance that keeps them focused on their work.

Like we already mentioned before, Samsung and its Evo range of SSDs have become a clear choice in terms of performance. The Samsung Evo 970 is not an excuse. What makes them the best choice is their affordable pricing and faster performance compared to the traditional SATA drives.

The pricing of the Samsung drives has been going down quite consistently over the years. That holds for the Samsung Evo series as well. This entirely makes them the best choice for the mid-range SSDs and thus offer a faster performance at a relatively lower price bracket.

The real performance lies in the speed – the read and writes speeds that the SSD offers you. The Samsung Evo 970 comes with the sequential read speeds of up to 3500 MB per sec while the write speeds reach up to 2500 MB per sec. This performance has been made possible, thanks to the inclusion of the same 64-layer MLC V-NAND technology as on the Evo Pro series by Samsung. It also comes with the newly designed Phoenix controller.

Also, the Samsung Evo 970 also comes with the latest Intelligent TurboWrite technology that generates buffers up to 78 GB, thus letting you get even faster write speeds. If the claims from Samsung can be believed, it delivers 65 percent faster sequential write speeds with the help of these new technologies and controllers.

When put to testing, the Samsung Evo 970 lives up to the expectation, where the read and write speeds peak at the rated speeds. In essence, it offers considerably higher read and write speeds and also can run for prolonged periods without heat generation thanks to the Dynamic Thermal Guard technology that takes care of overheating.

The Comparison between the two SSDs: WD Black SN750 vs Samsung Evo 970

Instead of going through a comparison based on the detailed reviews of the two competing SSDs, we though a head to head comparison can serve to be a better option. The side by side comparison will perhaps help the discerning customers find what they are looking for and choose their favorite drive right away without having to check out every specification.

The specification comparison above should indicate that the two competing SSDs have almost similar functionalities and capabilities. However, under practical usage conditions, the Samsung Evo 970 offers you better sequential read speeds, while the WD Black SN750 comes up with excellent performance when it comes to the write speeds offered.

Which one should you go for?

That should be a million dollar question, especially when we are comparing the longstanding leaders in the realm of Hard drive and SSDs. More so, when they have the specifications that read almost equivalent in many respects.

Samsung has been an excellent player with its Evo 970 since long. The third iteration of the drive in its current avatar has indeed been using the hardware from its pro range of SSDs, and that should be something that goes definitely in its favor. Moreover, the test conditions reveal that it goes over the edge with the performance that surpasses its rated sequential read and writes speeds.

The gaming Mode on the WD offering can be a saving grace, but then the pricing may be yet another factor that may take its toll on the WD Black SN750. The Samsung Evo 970 has always been a leader in affordable pricing coupled with performance, and we would think the WD Black SN750 coms quite close to the Samsung offering, but may not be able to surpass in its current form.

That was our honest review for the best among the Samsung Evo 970 and WD Black SN750. Not that either of them can be treated to be inferior to the other, but still our vote goes to the Samsung Evo 970 for the obvious reasons we cited above. Even then, if you are in doubt, you may check out the reviews and comparisons between the two models above and draw your conclusion.

Which one among those almost equally capable SSDs would you prefer? No matter which one you choose, feel free to share your reasons for your preference to either of them through the comments here below.