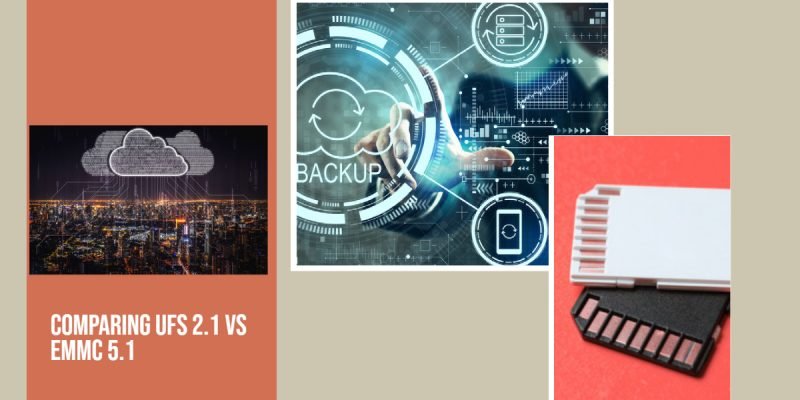 Today, almost all of us use smartphones today, and there are several options available to pick and choose from.

Any smartphone that you may be using they have two of the most noteworthy memory chips inside them. One of them is RAM which reads and writes the data relatively faster but cannot store it.

As soon as the power is switched off the RAM, the data inside it is gone forever. Another memory chip that we will be discussing today is the one used for storing your data permanently.

It is the internal storage that helps you save your data in the long term including your apps, photos, music, and the operating system itself.

The memory chip or the storage chip may not be as fast as the RAM but can help you save the information on them for a prolonged time. As you might have discovered by now, your smartphone is useless without a memory chip.

UFS stands for Universal Flash Storage. It is a storage technology standard. The standard dictates how the UFS-enabled chip interacts with the rest of the system on the smartphone.

However, when it comes to smartphones, the UFS as a storage standard was introduced in 2015.

The latest standard as it stands today is known as UFS 3.1. UFS 4.0 is already announced by Samsung and will be in mass production soon.

The UFS 2.1 (& 2.2) is the standard used in the next-generation mid-range mobile devices. You can find the new generation flash technology providing you with an enhanced degree of efficiency.

It is equipped with higher bandwidth and thus provides you access to a faster storage performance compared to the eMMC 5.1.

You will find it 10 times faster than the eMMC 5.0 standard. The ability to reach the sequential read and write speeds of up to 624MB/s and 154MB/s, respectively, can make it ideal for low-power devices.

The eMMC flash storage standard is the managed NAND flash and was introduced by the MultiMediaCard Association (MMCA). The storage was developed as a smaller embedded version of MultiMediaCard, which was set back in 1997.

MMCA later handed over the rights for all its standards to JEDEC in 2008.

The eMMC 5.1 standard has an embedded NAND flash storage with a flash memory controller similar to the SD card but non-removable. You would find it offering you outstanding performance with the added controller, which manages data distribution and reliable writing to prevent data corruption.

Compared to the UFS 2.1, the eMMC standard is an older storage solution for low-power mobile devices. However, it has been observed to be relatively stable, and thus it is used in commercial applications such as e-readers, smartphones, and tablets even today.

However, if you look at it from a technical point of view, you would find it equipped with an advanced NAND flash memory. This will mean you will have the storage bundled with a controller part in addition to the flash memory.

What changes would UFS 2.1 bring in smartphone storage?

The UFS storage technology is designed to provide superior storage performance some of which is inherited from Enterprise storage solutions like SCSI. With the right implementation of the technology, you would find that the new UFS drives can give you a capability that can be as fast as the Solid State drives or SSDs on a PC or laptop.

The UFS standard is designed to help your smartphones boot faster than previous smartphones and other portable devices. They can also take considerably lesser time to copy files or even open apps.

As things stand now, you would find that the UFS 2.1 is used on a wide range of smartphones, including the OnePlus 5T, Galaxy S8, and HTC U11.

What is the significant difference between the UFS and eMMC standards? 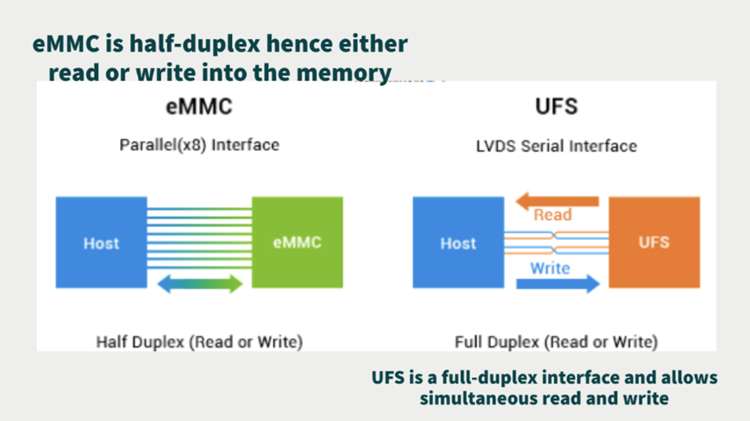 Now that we have understood both the standards, it may be worthwhile to pay attention to find more details about them. Let us explore the two storage standards without the mention of the prefixes such as 2.1, 3, or 5.1.

UFS is a standard developed by the JEDEC. It is a storage solution that would determine and decide how the storage or memory chip on a device connects and exchanges information with the system.

This will help ensure that data transfer is faster, the apps are opening up quickly, and even the app installations are happening faster.

The UFS storage system or standard has arrived on smartphones only recently. However, it has been available on other devices for a long time. The storage standard is used on many devices, including cars, media players, VR systems, and Chromebooks.

The development of NAND technology has made advancement in flash technology possible.This brings us to the current generation of NAND flash called V-NAND/3D NAND.

The eMMC standard was launched in 1997 by the MMCA (MultiMediaCard Association). The traditional storage solution was available on many devices, including smartphones.

UFS 2.1 vs eMMC 5.1: Here is a quick technical summary of the differences:

How do the eMMC and UFS standards perform?


The storage solutions – whether UFS or eMMC, were introduced to ensure a faster file copy operation and improve the overall user experience you may have on the smartphone or other device.

If you look at the first generation, UFS storage launched in 2011, and it was observed to have three times faster read and write performance when compared to its counterpart.

If you look at the UFS 3.0, you will find access to sequential reads of 2,100MB/s while writing the data at a speed of 410MB/s. That way, you could work with the graphics-heavy 3D games.

When you compare it to the UFS 2.0 standard, you will find that the UFS 3.0 standard provides you access to a massive 6x rise in reading speed. You will also find the data writing speeds reaching up to 8X.

You would find the apps crashing and stopping midway or even taking place at a languid pace, and you would know that the main culprit for the issue is eMMC storage. The eMMC storage top out at 400Mbps with a peak speed of around 2Gbps.

You will find that the UFS standard is a good standard and a more advanced option than the eMMC. From now on, we are not far from a future where all smartphone storage will essentially be on UFS, and eMMC will slowly be phased out.

The eMMC standard was reintroduced in 2015, and a few significant improvements were introduced. The UFS standard, on the other hand, came with two new versions or new iterations.

There were two new versions after 2015, viz UFS 3.0 and 3.1 after the UFS 2.1 was launched in 2015. That means the eMMC version is slowly moving into oblivion, with each new development being introduced with the UFS standard.

Which standards would you prefer? With the recent applications requiring faster processing and better speed, it is essential to focus on a better standard and performance.

The graphics-intensive games and apps have been crucial to focus on. Of course, the budget smartphones do not have the UFS standard, and you will need to check out the high-end phones to find out if you can access the UFS standard.

In any case, we would expect almost all smartphones in the future to shift to UFS standard.