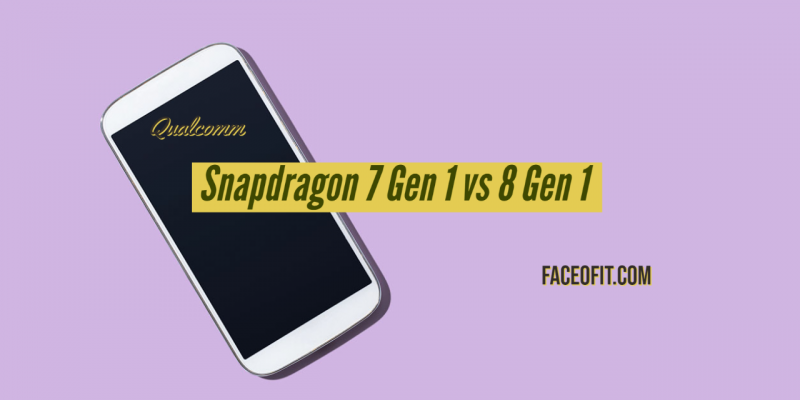 Qualcomm has been leaving no stone unturned to make the most promising efforts to achieve the best mobile experience in terms of performance and power optimization.

The Snapdragon 7 Gen 1 is the first non-flagship SoC to be presented by Qualcomm since they enforced their new platform naming and differentiation strategy.

The Snapdragon Gen 7 and Snapdragon Gen 8 have been a few new launches to redefine the mobile processor arena. We will compare the two new processors and find out how they fare against one another.

Qualcomm has announced that it will be holding the Snapdragon event on May 20, 2022. The event is being held in China, and the brand is set to launch the upper mid-range chipset, the Snapdragon 7 Gen 1, at the event.

The Snapdragon 7 Gen 1 conforms to the new naming strategy of Qualcomm for its Snapdragon range of processors and is set to be an upgrade for Snapdragon 778G+.

Within Qualcomm’s pantheon of smartphone SoCs, the Snapdragon 7 Gen 1 is the inheritor of last year’s Snapdragon 780G & 778G parts.

For the moment, Qualcomm is adhering to a single SKU, though previous year the 780G and 778G were a few months separated – so Qualcomm may bifurcate items farther down the line.

This will likely bring a better performance than the Adreno 660 on the Snapdragon 888.

Some reports suggest that the new processor will be built on Samsung’s 4nm process. However, there is no clarity available now about the exact manufacturing process Qualcomm will rely upon.

The processor will be the first mid-range chipset to sport the new naming convention of Snapdragon. The processor may make its appearance on several premium mid-range devices.

The new processor will rival the MediaTek Dimensity 8100. Adreno 662 graphics on the chipset should ideally be able to handle an FHD+ resolution display with over a 120Hz refresh rate.


As per the leaks available, the chipset is likely to power a couple of mid-range devices. More devices may be available soon with the new processor.

The Oppo reno 8 will likely feature a refresh rate of 120 Hz and a few other exciting features such as an OLED display, 80-watt charging, and a 50MP IMX766 sensor.

Even the Honor 70 may come with a display of a 120 Hz refresh rate. Other features likely on the Honor 70 include a BOE FHD 10bit display, 4800mAh battery with 66W fast charger support, 108MP primary lens, Stereo dual speaker, and NFC.

It may be noticed that there is no official confirmation available from the smartphone manufacturers on which phones will launch with the new Snapdragon 7 Gen 1 chipset.

In any case, some rumors suggest the launch of Honor 70 as the first phone to launch with the mid-range processor with the new nomenclature.

The Snapdragon 8 Gen 1 was the first chipset to launch with the new nomenclature of the Snapdragon range of processors.

The chipset was launched in December 2021 and provided a vast set of performance enhancements and feature improvements for the next-generation devices.

The new processor is set to provide you access to a set of innovations in terms of AI. The technology is developed to provide a few enhancements in photography, gaming, and connectivity.

The Snapdragon 8 Gen 1 Mobile Platform is touted to be the brand’s most advanced 5G platform.

One of the primary enhancements that you would observe on the new Snapdragon 8 Gen 1 chipset is that it allows 8K HDR video capture and combines 30 images to deliver 5x better shots for low-light photography.

The support for a wide range of options such as 8K video capture, 10 Gigabit 5G throughput, a triple-ISP with 18-bit capture, Bluetooth LE Audio enhancements, and a surge in raw firepower.

The octa-core processor comes with one Cortex X2 configuration at 3.0 GHz, three Cortex A710 at 2.5 GHz, and four Cortex A510 at 1.8 GHz. The manufacturer has decided to continue with the tried and tested 1+3+4 tri-cluster CPU arrangement.

Qualcomm expects a 20% performance improvement and 30% power saving compared to the Snapdragon 888.

The unnumbered Adreno GPU on the device leaves a lot to be guessed. Qualcomm has stated that it expects a 30% performance boost over its previous generation SoC and an equally newsworthy 25% power saving.

A few of the features that you can expect on the Snapdragon 8 Gen 1 would include the following:

When will the Snapdragon 8 Gen 1 appear in phones?


The Snapdragon 8 Gen 1 has already begun appearing on a few powerful smartphones. Xiaomi has announced that the upcoming Xiaomi 12 series will be the first phone to utilize the chipset. However, Motorola became the first smartphone manufacturer to beat them in the race.

The Moto Edge X30, launched in China on December 9, 2021, is the first phone to feature the new chipset and went on sale on 15th December. There are several Snapdragon 8 Gen 1 phones expected to launch in 2022.

We would expect every other smartphone company except Apple (well, that is obvious!), Google, and Huawei. Several manufacturers have already promised support for the new processor, including Black Shark, Honor, iQoo, Motorola, Nubia, OnePlus, Oppo, Realme, Redmi, Sharp, Sony, Vivo, Xiaomi, and ZTE.

Since the Snapdragon 7 Gen 1 has not yet been launched, it may be too early to undertake a specs comparison right away. However, we will attempt to understand the specs to the maximum possible extent.

That was a complete insight into the two processors from Qualcomm Snapdragon after the new nomenclature.

While the Snapdragon 8 Gen 1 has already been launched and appeared on most of the prominent smartphone models, the Snapdragon 7 Gen 1 is all set to bring the same magic to the mid-range devices.

The spec comparison outlined here is not complete as things stand now, but we will add more details and update the post when more information is made available about the new Snapdragon 7 Gen 1.