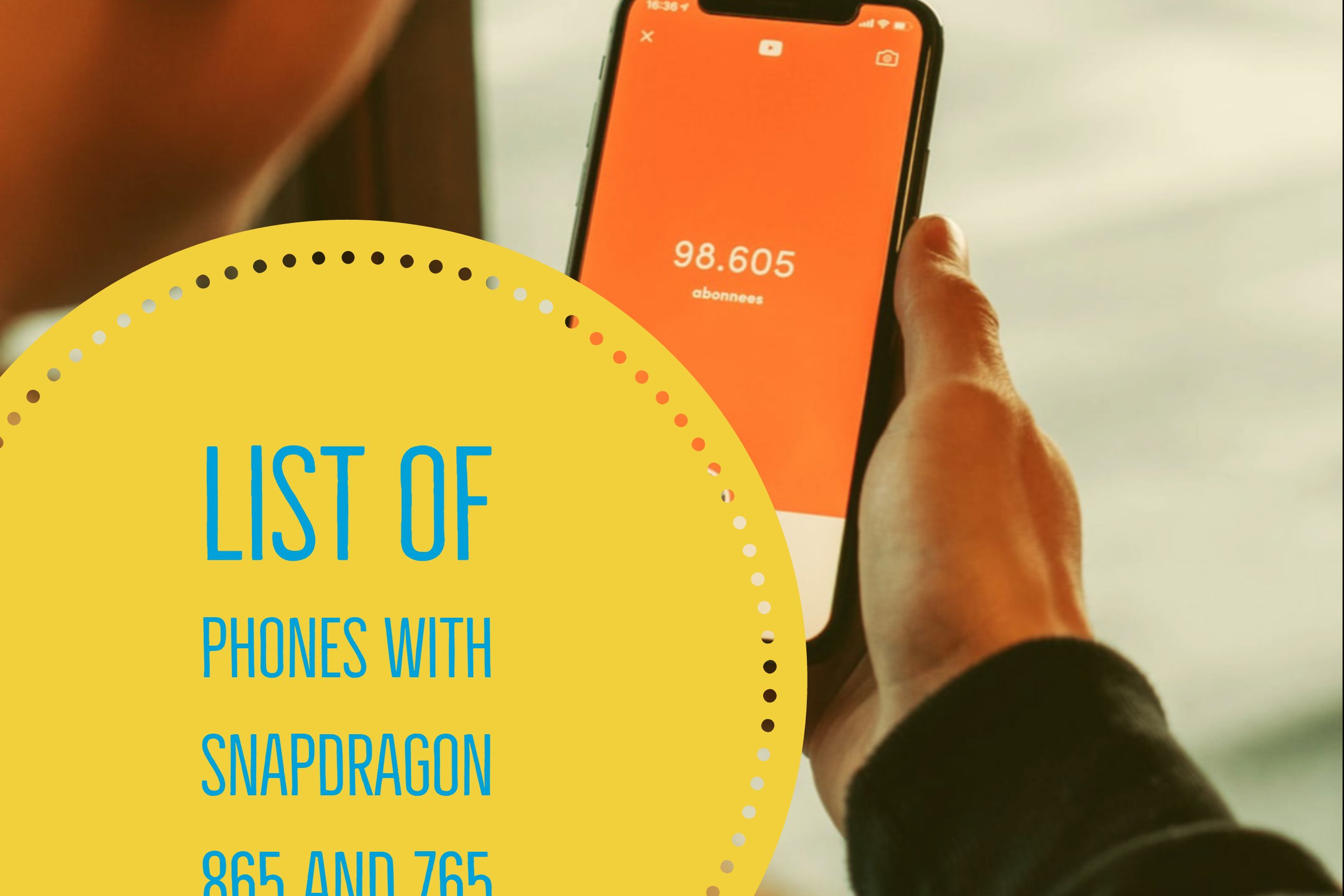 Are you looking for a list of Phones with Snapdragon 865 or 765? In this article, we list out the ones we know so far. Read to know more!

In addition to 5G, both of these chips would offer quicker graphics performance and excellent support for the high-resolution cameras than its predecessor. It is known that both these chips depict huge gains on paper, in terms of imaging capabilities and performance.

The Snapdragon 865 is the flagship chip that will find its way into several flagship Android phones in the coming year. On the other hand, the Snapdragon 765 is expected to power a complete range of more reasonable premium and mid-range phones. By early 2020, both these chips would reach their consumers through different phones throughout the world.

In the configuration of these chips, you will find all the latest processor and wireless components to deliver high performance. You will admire superior performance in terms of networking, camera, and graphics, etc. Take a look at the phones with Snapdragon 865, 765:

Being one of Xiaomi’s two brands, it is known that Redmi will be one of the foremost mobile phone brands to make use of the new 5G Snapdragon 765 from Qualcomm Technologies. It comes implemented with 5G technology.

Earlier, Lu Weibing, general manager of the Redmi brand, mentioned that the positioning of Redmi as a ‘5G trendsetter’ in 2020 suggests that this brand would be the foremost one to implement the latest 5G technology.

Moreover, this brand would implement the fastest new product release agenda and the most aggressive product features. The purpose of this idea is that more users will be able to enjoy the advantages of 5G. Recently, Qualcomm Technologies has launched the Snapdragon 765 mobile platform, and a new 5G phone incorporating this processor is about to release soon.

It is expected that the Redmi K30 series will contain a Qualcomm Snapdragon 765G Mobile platform. In this naming, ‘G’ stands for gaming, and this processor is a high-performance version of the famous Snapdragon 765 series.

This series makes use of the cutting-edge generation 5G solution from Qualcomm Technologies. This phone would come integrated with SA and NSA dual-mode. Discussing the product design, the Redmi K30 boasts a Dual DotDisplay along with ultra-small punch-hole design. This unique design offers a fullscreen experience.

Realme has by now launched X2 and Realme X2 Pro. Moreover, the brand would upgrade the existing mid-range flagship Realme devices within two-quarters of duration. It is known that Realme X3 Pro would be a component of the former Realme X series.

This phone is expected to be equipped with an excellent display and high performance. Some believe that the brand may include a punch-hole display in this Realme X3 Pro and the device would have Snapdragon 865 processor. It is expected that Realme X3 Pro may have a Penta camera that is powered by rear camera systems.

Realme X3 Pro will do well than X2 Pro in terms of design upgrade and little extra functionality. We may get to use the Realme X3 Pro in the second half of 2020. Discussing the display, the X3 Pro would have a 6.5-inch full-HD Super AMOLED display with a resolution of 1080×2400 pixels.

The aspect ratio, refresh rate, and sampling rate would be 20: 9, 120 Hz, and 135 Hz, respectively. With the 3D curved design screen, it is sure that this phone gives a flawless performance when you want to play the games or work on it. The in-display fingerprint feature is expected to be included. Also, the phone would have color OS 7. The Android version is v10.

The brand has taken enough care to offer superior speed and multitasking benefits. This phone would have up to 12 GB and 14 GB of RAM. In terms of storage, it has 256 GB (UFS 3.0) and 512 GB (UFS3.0); the same can be expanded up to 1TB. With the implementation of the liquid cooling chamber functionality, there would be a reduction in heating concerns.

In terms of camera, the Realme X3 Pro would excel at the best. This is because it would have 4 quad rear cameras and would also include a 108 MP primary sensor.  It is further known that this device would have an 8 MP sensor with a 117-degree ultra-wide-angle lens, a 5 MP depth camera sensor, and 16 MP secondary sensor. Using this camera system, you can shoot a video in 4K (120fps). Therefore, you can capture the most exquisite micro shot on this Realme device. For video calling and selfie, a 64 MP Sony camera sensor is included; its aperture is F / 2.0.

The detail about the price is still unclear. However, it is assumed that its price would be affordable, considering the great features it offers. There is a built-in 5000 mAh battery that comes equipped with 65W Super VOOC flash charge support. It is this technology that fully charges the device within 35 minutes.

Both these phones are dedicated to presenting a notch-less viewing experience. This is because both of them come implemented with the latest punch-hole design technology. There is a punch-hole camera upfront, and it comes without a pop-up sensor. Furthermore, there would be an additional camera sensor, so both these phones would be the foremost OnePlus smartphones to come equipped with a quad-camera setup.

To enhance the refresh rate, these smartphones would present a more enhanced display with the 120Hz refresh rate. As a result, a smooth experience is offered. Both these devices would be powered by Snapdragon 865.

The LG G9 ThinQ is expected to be launched in February 2020. Perhaps, the phone would feature 5G support. During its time of release, it would be up against the like of the flagship smartphones like OnePlus 8, Samsung Galaxy S11, and Xiaomi Mi 10. It is known that this LG phone would be equipped with a more advanced screen compared to the one in the current model. Unlike the 3K resolution, this LG phone would have a full 4K resolution.

At this point, it is assumed that LG G9 ThinQ would have an octa-core Qualcomm Snapdragon 865 processor along with Adreno’s latest updated graphics. Moreover, this device would have an X55 5G network modem and will provide IP68 water protection. To reduce the delays in charging, it would have Quick Charge 4.0+ fast charging.

There is a lot of discussion going on Google Pixel 5 in 2020. If the Pixel smartphones fail again, this would be the last year for them. Both Pixel 3 and Pixel 4 series is indeed incapable of producing much satisfaction among smartphone buyers.

So, this time, Google considered improving in the smartphones – Google Pixel 5 and Pixel 5XL. Though the working is decent enough, the Pixel is still incapable of being the best-sellers in the market. The novel design is expected from the customers’ end. Moreover, the company might choose to entirely transform the Pixel 5 smartphone from the existing Pixel 4 series of smartphones.

Both the Google Pixel 5 and Pixel 5XL will be running on a Qualcomm Snapdragon 865 platform. They would have plenty of appealing features for the benefits of customers. The major selling point of both these Pixel smartphones is the camera. Therefore, Google has uniquely focused on the camera for Pixel 5 and Pixel 5XL.

It has been a long time since there are plenty of rumors and leaks about Nokia’s forthcoming Nokia 8.2 5G phone. Previously, leaks suggested that this smartphone may come with Snapdragon 835. However, the recent leak implies that it may come equipped with Snapdragon 765. One of the best features of this Nokia phone would be a 64MP primary camera.

This device would be a next-gen 5G phone packed with tons of features. Nokia has confirmed that this phone would have PureDisplay and ZEISS optics, which come with the 4K UHD ultra-wide video support. Furthermore, the leaked teaser image shows a side-mounted fingerprint scanner for biometric authentication. Also, there would be a triple camera setup at the rear.

Samsung is believed to be drifting away from its custom mobile chipset over its upcoming generation flagship smartphone. From one of the sources, it is inferred that the forthcoming Galaxy S11 will utilize Qualcomm’s Snapdragon 865 processor. This Galaxy phone will be made available in most countries. Samsung is reported to launch the Galaxy S11 in February 2020, in San Francisco.

Right from the inception, Samsung has used both Snapdragon and Exynos chipsets in its flagship devices. It is known that in the major markets, this company only vends Exynos-powered devices. For example, in India, Samsung has never launched the Snapdragon variants of the Galaxy S and Galaxy Note series. The brand has prohibited the availability of Galaxy S and Galaxy Note series devices that are powered by the Snapdragon processors in Japan, the US, and China.  However, things may change in the coming year.

Taking a look at the specifications, the Galaxy S11 would have a custom 108MP primary camera that has 8K video recording ability. The leaks also suggest that the device would include a120Hz OLED display, Android 10 OS, a Penta camera setup, and an efficient battery.

It is expected that S11 would resolve the key issues generally found with almost all 5G phones this year. The included image signal processor will be capable of processing 2 gigapixels per second. The Samsung Galaxy S11 can successfully capture 8K video, 64MP screen grabs from a video. Moreover, this flagship device would support super slow-motion video at 960 fps. Unlike the current phones having low frame rates per second, this device is capable of performing such high frame-rate capture.

The Samsung Galaxy S11 is probable to carry on the tradition of earlier Galaxy S phones by improving its mobile gaming ability. The things that we can expect are shown by the preview of the Snapdragon 865 chipset. The built-in Snapdragon 865 would support 144Hz display refresh rates.

Some of the recent leaks also suggest that the Galaxy S11 would have 120Hz refresh rates. Similar to the 200 camera megapixel support, it is not a feasible idea to expect all 865 Snapdragon processors to go to 144Hz. This would not be possible, at least in 2020.  However, at the mentioned refresh rate, you will be able to see a lot more screens.

The customers are eager and confused about the capability for the Adreno 650 graphics chip to get updated drivers via an app store. Though this phone is built into Android OS and the 865 chipsets, it is still up to Samsung to make the drivers available. The history already shows that Samsung is slow to get routine Android updates to its consumers.

When you go for any of these discussed smartphones, you will be benefited from the high performance of Snapdragon 865 or 765 processor. Right from image capturing and video recording ability to processing powers, it is sure that these phones will stay popular in the market in the next year.