The LPDDR RAMs have become one of the leading standards for mobile device memory and have taken a significant lead over previous iterations. When it comes to the LPDDR RAMs, each generation has been able to achieve better performance at lower power consumption.

With the 5th generation of the DRAM technology being launched by Samsung, we thought it to be a good idea to check out the differences between LPDDR5, LDDDR4X, and LPDDR4.

What are the significant changes observed in the successive LPDDR memory modules?

The significant change in the LPDDR RAM options and the successive generations of the technology has been in the realm of memory speed and efficiency.

LPDDR4 vs LPDDR4X vs LPDDDR5 – A Complete Comparison

Let us compare the three different iterations of the memory modules based on different parameters.

The LPDDR4 was launched in March 2012. JEDEC launches the technology. The production went on the floor by Samsung in December 2013. The following extended standard, LPDDR4X, was launched in September 2016.

SK Hynix manufactured the first LPDDR4X modules in January 2017. The LPDDR5 was released in February 2019. Samsung undertook the first manufacturing of the LPDDR5 RAM in July 2019.

Performance – LPDDR4 vs LPDDR4X vs LPDDDR5

As outlined already, the new LPDDR5 is 1.5 times faster in data transfer speed when you compare it to the LPDDR4. You will access the transfer speed of 51.2 Gbps and a clock speed of 6,400 Mbps at its theoretical peak.

The LPDDR4X introduced the concept of 1x nm process technology and, thanks to the new option, showed a 15 percent faster performance compared to the predecessor LPDDR4. The LPDDR4 is what redefined the technology off faster RAM. It is 1.2 times faster than the LPDDR3 RAMs.

In terms of transfer speed, you will find the LPDDR4 offering 3200 Mbps speed improved to 4266 Mbps on LPDDR4X. The LPDDR5 in its current iteration, comes with a rate of 6400 Mbps. 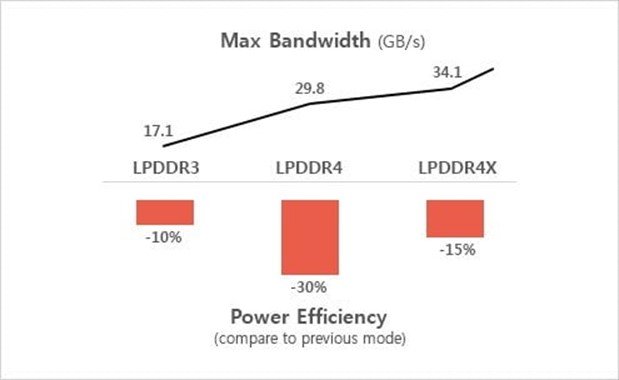 The LPDDR4, when launched, came with a power consumption of 1.8 v to 1.1 V. This was 37 percent better than the previous generation of LPDDR3. The LPDDR4X improved this further from 0.6 V to 1.1 V.

This was a 17 percent reduction in power consumption. The LPDDR5 brought ahead a new improvement and came with a host of technologies such as DVFS, Deep Sleep Mode, DQ Copy, and WriteX.

This has resulted in a 45 percent reduction in power consumption with the operating voltage between 0.6 to 1.05 V.

The LPDDR4 improves the data rates by almost double when compared to the previous generations, the LPDDR3.

You can get data rates as high as 3200Mbps with LPDDR4 as compared to the 1600 Mb per sec performance on the LPDDR3.

The LPDDR3 had a single channel, while the LPDDR4 opted for a dual-channel design.

It offers you 16 Bits per channel, thus providing you a total of 32 Bits width. This can be helpful in lowering the power requirements of the core. The short data path guarantees lower power consumption.

This can be quite helpful in improving the operating speed and performance. The LPDDR4 offers a marginal gain in the power consumption from 1.2 volts on LPDDR3 to 1.1 Volts on LPDDR4.

It is clear that LPDDR5 is faster and more power-efficient but due to its high fee, LPDDR5 is now available only in flagship mobile gadgets.

What are the primary changes that have been introduced to the LPDDR5 RAM?

The LPDDR5 RAM comes with the following advancements and improvements. –

The LPDDR5 standard has been one of the most critical and powerful options that you would find quite rewarding and unique in almost every respect. The new standard is a winner with advanced features, including DVFS, Deep Sleep Mode, DQ Copy, and WriteX.

The 45 percent reduction in power consumption coupled with the 1.5 times enhancement in the speed are a few of the options that you would find quite a great option ever.

We would foresee an excellent improvement in the smartphone arena, and you can be assured of a great degree of improvement ever.

Comparing PPS vs PD vs QC Specifications and Differences