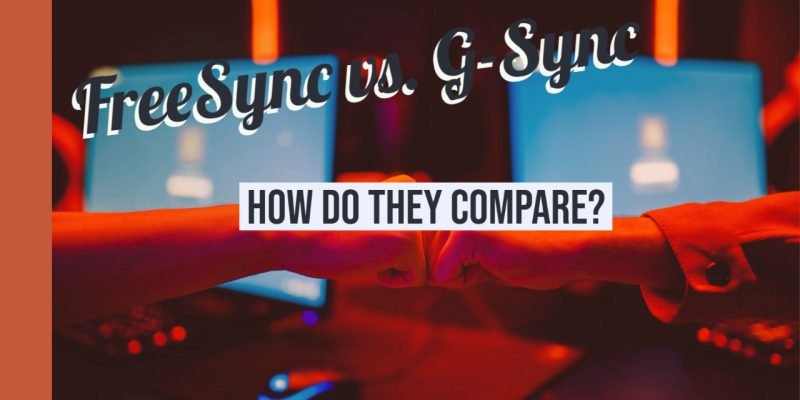 Before Adaptive-Sync technology emerged in the form of Nvidia G-Sync and AMD FreeSync, the only thing performance-seeking gamers could wish for was higher resolutions or a refresh rate above 60 Hz.

Today, not just do we have monitors routinely handling at 144 Hz, and higher, but Nvidia and AMD have both been revamping their respective technologies. In this era of gaming displays, which Adaptive-Sync tech reigns supreme in the match between FreeSync vs. G-Sync?

If you have decided to buy a gaming monitor, the first thing you need to pay enough attention to would be to look for the differences between G-Sync and FreeSync.

The two technologies have been designed to improve the monitor performance and match it with a compatible graphics card. The two technologies, viz FreeSync and G-Sync, come with their pros and cons. Let us check out the differences between G-Sync and FreeSync.

G-Sync is the proprietary solution coming from Nvidia. The technology is designed to provide you access to solving the issues such as screen tearing. This technique uses adaptive refresh technology and has been compatible with Nvidia graphics cards alone.

The G Sync technology is designed to sync frame and refresh rate together. This is achieved with the help of matching up the refresh rate of the monitor.

In case you have a GPU that offers you a frame rate of 98 FPS, and the monitor provides you a 120 Hz refresh rate, you will end up two syncing at 98 Hz.

The G-Sync technology provides you access to the best syncing by embedding the hardware module provided by Nvidia into the monitor. That would mean that G-Sync displays are generally observed to be more expensive because of the necessity for the licensing for each monitor.

The G-Sync technology manipulates the monitor’s vertical blanking interval (VBI) and thus reduces screen tearing more efficiently. VBI on a monitor is the time interval between one of the frames and the next frame. The G-Sync recognizes this difference or gap and holds sending the information. This will help prevent the frame drops more effectively.

While G-Sync has been one of the excellent means for enjoying a far greater degree of technological advancement, you would find it suffering from the price. You must buy both G-Sync-equipped monitors and the Nvidia graphics card.

FreeSync, as you would have guessed rightly, is the AMD alternative for the Nvidia G-Sync. The technology is applicable and compatible with the AMD graphics cards alone. It will use the same adaptive refresh rate as the G-Sync technology.

However, the FreeSync technology focuses primarily on the graphics card side. The technique uses the existing VESA Adaptive-Sync standard, which is part of the DisplayPort 1.2a technology.

That would make it a cheaper alternative as it does not need a chip inside your monitor to work with your AMD graphics card. It also does not require you to have any specific licensing.

FreeSync was launched in 2015 and is compatible with practically every monitor with an Adaptive-Sync standard built into the DisplayPort 1.2a standard. It should be noticed that the FreeSync technology is not available on legacy connections such as VGA and DVI.

Supported GPUs from AMD and Nvidia:

On a high level, let us check which GPU series support these techs.

What are the advantages offered by FreeSync?

The primary advantage offered by the AMDs FreeSync would mean that it provides you with a great degree of affordability. The broader availability of the monitors would make it a formidable choice. It can offer you a great degree of performance.

One of the enormous advantages you stand to gain with FreeSync is that it provides you access to a no-license functionality. This would mean precisely what would make it stand apart from the rest. The technology is focused on the graphics cards alone; thus, it does need you to go with any manufacturer-specific hardware.

More choice and a high degree of affordability can be a few features that you would find quite interesting.

What are the advantages of G-Sync?

The G-Sync has been around for a long. The G-Sync is known to be offering you a great degree of performance excellence. It can be an excellent option for providing you access to a genuinely formidable choice with the best performance. You would find the FreeSyncc monitors stuttering a little in demanding situations compared to the G-Sync monitors.

You would also find the market share enjoyed by the Nvidia a little on the higher side when compared to the FreeSync monitors. The G-Sync can come up with less requirement for hardware power on the PC end.

Which among them is better?

Both G-Sync and FreeSync rely upon the Adaptive-Sync technology and have been developed by Nvidia and AMD, respectively. These technologies have been designed to provide access to HDR and extended color support.

If the performance and image quality are the prime factors you want to consider, you will find the G-Sync, and FreeSync monitors with similar performance. The significant difference between the two technologies lies in screen tearing and input lag.

If you are looking for a low input lag and would not have any issues with the screen tearing to a certain extent, the FreeSync monitors would be a good choice for your needs.

In case your preferences are to have a smoother motion with no tearing, the G-Sync should be what would make it a genuinely formidable choice. For an average professional, both G-Sync and FreeSync provide similar performance. However, in case of cost is not an issue for you, the G-Sync should be the overall winner.

Depending on your needs and preferences, you’ll find no clear winner between the two technologies. In most cases, your best choice is picking the technology that works with your computer: G-SYNC if you have an NVIDIA graphics card, and FreeSync if you have an AMD graphics card.

If comparing them directly, the essential feature works the same in both. Still, G-SYNC offers a more polished and consistent platform for a premium (which means that the best monitors around are mostly G-SYNC). At the same time, capabilities can vary wildly between the range of FreeSync models found in every price range.

The information here should help you with a good knowledge of this scenario.