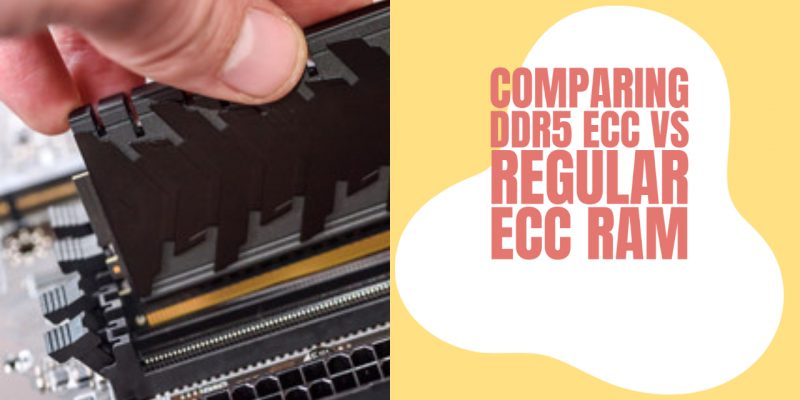 Error correction code memory (ECC memory) is a type of computer data storage that uses error correction codes to detect and correct random errors when reading from or writing to computer memory. ECC can be built into the hardware, such as a CPU, or it can be added to a system later on without any modifications.

What is Error Correction Code Memory?

ECC Memory is used in many different types of electronic devices. It is often used in servers, storage devices, and network equipment. ECC Memory can also be used in desktop computers, laptop computers, and workstations.

DDR ECC is an error-correcting code (ECC) used in some types of dynamic random-access memory (DRAM). This type of ECC can correct single-bit errors and detect double-bit errors. DDR ECC uses a Hamming code to achieve this.

Real ECC is a more sophisticated form of ECC that can correct multiple-bit errors and detect burst errors. Real ECC uses a Reed-Solomon code to achieve this. DDR ECC is more common than real ECC because it is less expensive.

In the past, DRAM ECC was performed by the memory controller, not the DIMM. The DIMM does not contain any ECC. Error-correcting code (ECC) is a bit that checks data for mistakes. With this additional capacity, fault checking can be done while maintaining the same level of performance. ECC memory chips have an additional memory chip wired to 8 extra data bits.

Non-ECC Memory will not function as fast as ECC memory because the physical size of ECC memory and more data lines cause more electricity to flow.

A limitation on how much ECC memory a computer will be able to use is something set by the manufacturer of it. It’s not actually a technical limitation but rather a marketing decision.

As explained earlier, Error correction codes protect against data corruption and are used in applications where undetected errors would have costly consequences. They can be found in high-stakes areas such as financial computing or scientific computing. EC codes also help protect large server systems from crashes and ensure maximum availability.

A single bit of DRAM can spontaneously flip to the opposite state. This happens with assistance from alpha particles emitted by contaminants in chip packaging.

Still, research has shown that most of the one-off soft errors in DRAM chips occur due to background radiation, chiefly neutrons from cosmic ray secondaries, which may change the contents of one or more memory cells or interfere with the circuitry used to read or write to them.

Hence, the error rates increase rapidly with rising altitude; for example, compared to sea level, the rate of neutron flux is 3.5 times higher at 1.5 km and 300 times higher at 10-12 km (the cruising altitude of commercial airplanes). As a result, systems operating at high altitudes require special provisions for reliability.

For example, the spacecraft Cassini–Huygens, launched in 1997, contained two identical flight recorders, each with 2.5 gigabits of memory in the form of arrays of commercial DRAM chips.

During the first 2.5 years of flight, the spacecraft reported a nearly constant single-bit error rate of about 280 per day. However, on November 6, 1997, during the first month in space, the number of errors increased by more than four on that single day. This was attributed to a solar particle event detected by the satellite GOES 9.

There was some concern that as DRAM density increases further. Chip component ships get smaller while operating voltages continue to fall; DRAM chips will be affected by such radiation more frequently since lower-energy particles change a memory cell’s state.

On the other hand, smaller cells make smaller targets, and moving to technologies such as SOI may make individual cells less susceptible and counteract or reverse this trend.

Recent studies show that single-event upsets due to cosmic radiation have been dropping dramatically with process geometry and previous concerns over increasing bit cell error rates are unfounded.

Error correction code (ECC) memory is a type of computer RAM (random access memory) that can detect and correct errors in stored data. ECC memory is used in mission-critical applications where data corruption could lead to catastrophic results, such as a space shuttle losing control and crashing.

ECC memory works by adding an extra bit to each byte of data, which allows the memory controller to detect and correct errors. The extra bit is called a parity bit, and the addition of this bit makes ECC memory more expensive than regular RAM.

Parity checking can detect single-bit errors but not all multi-bit errors. For this reason, ECC memory is often used in conjunction with other error detection and correction methods, such as parity checking or CRC (cyclic redundancy check).

Why is ECC Memory Important?

Error correction code memory, or ECC memory, is a type of computer memory that can detect and correct errors in data. ECC memory is used in servers, workstations, and other mission-critical computers to ensure that data is stored and retrieved accurately.

While ECC memory is more expensive than non-ECC memory, the added cost is worth it for mission-critical applications. For example, ECC memory can prevent data corruption in a database server, leading to data loss or inconsistency.

How Does ECC Memory Work?

Error correction code memory, or ECC memory, is a type of computer memory that can detect and correct errors in data. ECC memory is used in mission-critical applications where data integrity is essential, such as servers, storage systems, and aerospace applications.

ECC memory is a type of computer memory that can detect and correct errors. ECC memory is used in servers, workstations, and other computers that require high reliability.

Google found that errors in the performance of their servers are quite widespread, despite having a much smaller scope than other studies. Google estimates that 24-70K errors occur in every billion hours charged to their servers. With 8% of their memory modules affected by annual errors, it is clear that new methods for this form of computing will have to be developed.

A large-scale study based on Google’s large number of servers was presented at the SIGMETRICS/Performance ’09 conference. The actual error rate found was several orders of magnitude higher than the previous small-scale or laboratory studies, with between 25,000 (2.5 × 10−11 error/bit·h) and 70,000 (7.0 × 10−11 error/bit·h, or 1-bit error per gigabyte of RAM per 1.8 hours) errors per billion device hours per megabit. More than 8% of DIMM memory modules were affected by annual errors.

Error correction code memory, or ECC memory, is a type of computer memory designed to detect and correct errors in data. ECC memory is typically used in mission-critical applications where data integrity is paramount, such as servers and storage systems.

While ECC memory is more expensive than non-ECC memory, it is often worth the extra cost in applications where data integrity is critical. In many cases, using ECC memory can mean the difference between a system that runs smoothly and one that experiences frequent crashes or data loss.

ECC memory is a type of computer memory that uses an error correction code (ECC) to detect and correct errors. ECC memory is used in computers where data integrity is essential, such as servers, workstations, and mission-critical systems.

Error correction code memory works by storing an extra bit of information for each byte of data. This extra bit can be used to detect and correct errors. When an error is detected, the ECC memory can automatically fix the error without the need for human intervention.

Error correction code memory is more expensive than regular computer memory, but it is worth the investment for critical applications.

Error correction code memory, or ECC memory, is a type of computer memory that is designed to detect and correct errors in data. ECC memory is typically used in servers and other mission-critical systems where data integrity is paramount.

While ECC memory does come with a higher price tag, the added protection it provides can be well worth the investment for businesses that rely on their data being accurate and error-free.