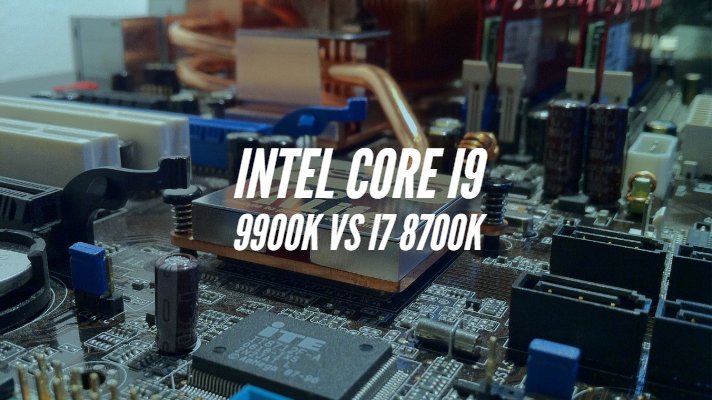 Intel has been taking up the 9th generation processors to the next level and has been considerably leaned towards introducing better features. The 9000 series of processors have been receiving a massive deal with the i9- 9900K. What does this new processor packs in and how does it compare with the i7- 8700K? (Core i9 9900K vs i7 8700K) Let us check it out in the following paragraphs.

Before we get started, we would like to set expectations that the final specs are subject to change, since, at the time of writing this, the Core i9 9900k is not released yet!

The Intel i9 – 9900K is the flagship processor coming from Intel in its 9th generation of capable chipsets. Believed to be the most powerful CPU until now, the i9 – 9900K has made its appearance on performance benchmark website 3DMark recently.

Of course, the processor has not yet been officially launched, but the rumor mills have been working overtime to indicate the presence, thanks to its appearance on 3Dmark. We are expecting the launch sometime in late August or September. However, please note that there are no specific inputs from Intel as such.

The database entry does not show the name of the processor as i9 – 9900K though. Possibly, the database is not detecting it as of now and shows up as a new entry. The specifications, however, indicate that it is the i9 – 9900K CPU by every means.

The specifications read as follows –

Other specifications include an L3 cache of 16 MB, Intel UHD 620 graphics and a TDP of 95 W. The tests were conducted by 3DMark using Asus ROG Strix Z370-F Strix Gaming motherboard. This should be a clear indication to prove that the new i9 – 9900K will be compatible with the Z370 architecture. Of course, it may need BIOS upgrade for the purpose. By that logic, we would also expect it to be consistent with the Z390 platform as well.

The processor shows as processor not recognized on the 3DMark database, and has the following details –

The database does not show the manufacturing process and TDP though. However, it is assumed that the processor will be manufactured using a 10 nm process.

If you are a gamer, you will not want to settle for anything less than i7 – 8700K. That is ideally one of the most potent options currently available.

In fact, it has boosted the performance statistics with its six cores and 12 threads operation. The 4.7 GHz, turbo boost clock speed, is perhaps the best that Intel has ever come with. The processor is believed to be handling the content creations and deliver quite effectively. In fact, the inputs from the industry sources claim that the i7 – 8700K was introduced in quite an urgency to tackle the growing competition from AMD.

Yes, with the high boost speed performance, there comes an issue of overheating. Since the processor comes with just six cores, reaching those boost speeds can create a lot of heat. A processor is indeed an excellent option. You can definitely go for it – if you are looking for a mainstream system processor.

The processor comes with Intel UHD 630 graphics. That should work fine with the necessary kind of gaming, e-sports, and media decoding – encoding tasks. If you are looking for some extra experience, you would indeed need to look for a discrete and more powerful GPU as a separate purchase.

The specifications read as here below –

Increasing the memory is entirely out of luck for you. Plus, Intel has provided only 16 PCIe lanes, and there is no hope for adding more. The lanes are directly connected to the CPU, and that is what you would need to be satisfied with.

The Intel Core i9 – 9900K is still in a speculative stage, and as such we may not be able to come up with any concrete information as of now. However, based on the rumored specification sheet as listed in the above discussion, we may be able to derive a few differences that the two options provide you.

We thought of comparing them in the table below for a better understanding.

Some rumors have been suggesting a base clock speed of 3600 MHz for the i9 – 9900K, but the benchmarks available on 3DMark indicate that it will be 3100 MHz. It would be a little strange given the fact that the i7 – 8700K comes with a clock speed of 3.7 GHz. We would hope that this is just the prototype and not the final product as yet.

Well, that is what we have concerning the impending launch of i9 – 9900K and its comparison to the i7 – 8700K. However, it should be noted that the comparison is purely based on the speculations and rumors. As such, we would advise our readers to take these results with a pinch of salt.

Things will be apparent when Intel launches the processors in the last week of August or in September.