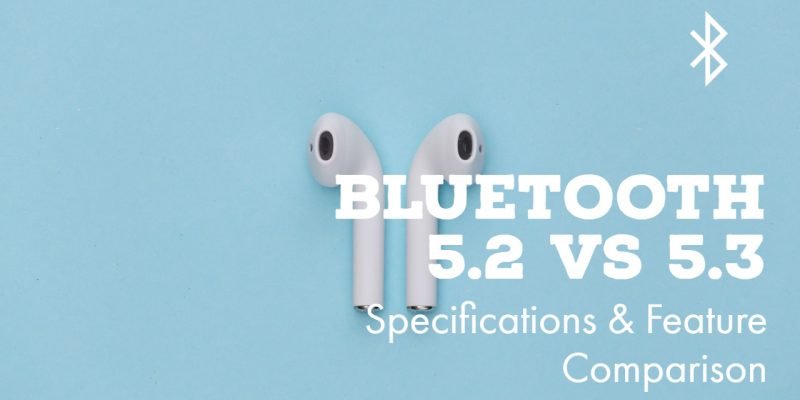 In June 2016, the Bluetooth Special Interest Group declared Bluetooth v5. As per their press release, Bluetooth v5 will be known as Bluetooth 5. It comes with increased speed, range, and broadcast messaging capacity. It aims to deliver robust, reliable Internet of Things (IoT) connections that make smart buildings, intelligent homes, and outdoor use cases a reality.

Now let’s go through the description of prominent aspects of Bluetooth 5.2: 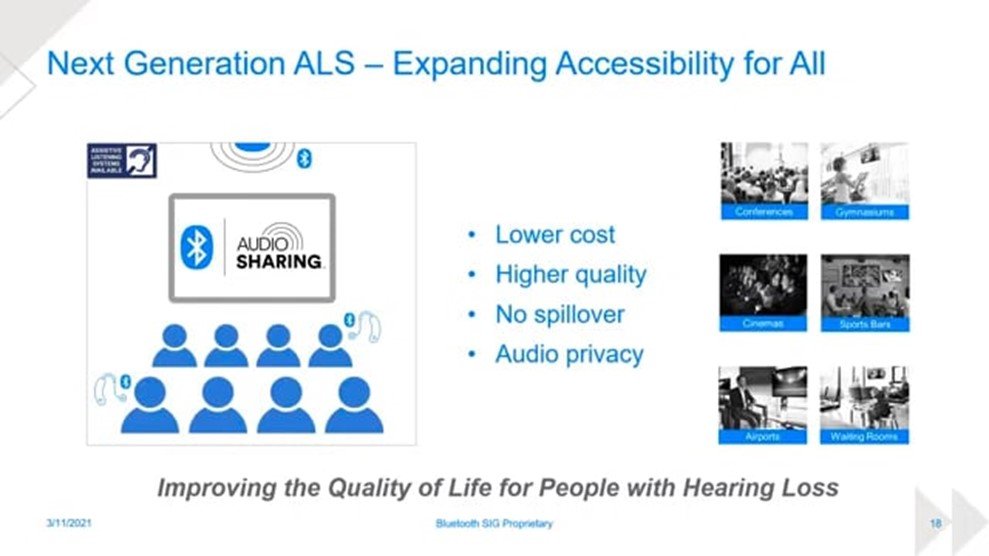 EATT streamlines breaking down L2CAP packets from various applications and merging them into smaller chunks that are more manageable. Consequently, transactions from two or more applications could be finished simultaneously.

The EATT feature improves user experience when multiple applications are operating on the same Bluetooth LE stack. Also, it decreases overall latency. It is important to note that EATT is optional per the specification. It needs an encrypted connection between both Bluetooth LE devices, making it more secure than ATT.

Through LEPC, a receiving device can supervise its partner device’s received signal strength indicator (RSSI) signal and ask for altering the transmit power level in either direction. Instead, a transmitter can adjust the transfer power and transmit that information to the receiver.

Consequently, it promises that both devices stay in their optimal signal ranges. Also, it decreases error on the receiving end and reduces power consumption via dynamic power management.

The power management through LEPC also enhances coexistence with other signals within the 2.4 GHz band, including signals from Zigbee and WiFi. 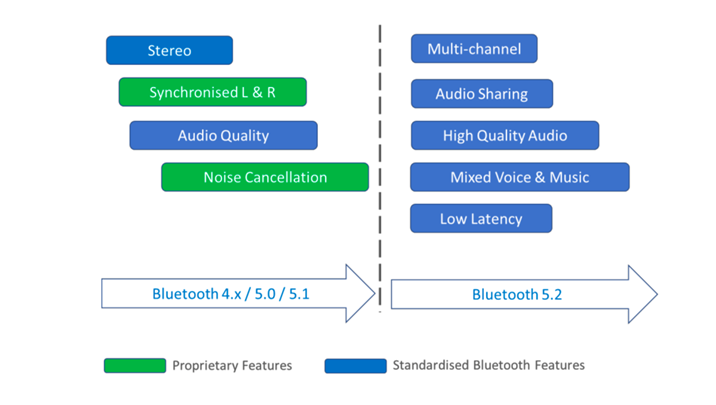 One of the significant feature upgrades is the support for isochronous channels. These channels can be used on any of the physical layer variants of LE. They can be used on 1M, 2M, and LE Coded configurations S=2 and S=8.

The latest isochronous channels of Bluetooth 5.2 support data retransmission for BIGs and CIGs, but in varied ways. For CIGs, the master transmits a packet to the slave, and then the slave reverts with a packet for every sub-event. For BIGs, only the master sends a packet in every sub-event. ISO intervals can vary from 5 milliseconds to 4 seconds.

LC3 optimizes the existing codec of Bluetooth LE by compressing audio transmissions and scaling them down to very extremely bit-rates without negatively affecting the audio quality.

LC3 and Bluetooth version 5.2 will reform the way consumers use Bluetooth audio accessories. Because LC3 is implemented with multi-stream capabilities and support for multiple synchronous connections (by default), True Wireless users can benefit from improved battery life and faster pairing. The improved battery life offers better efficiency and a more extended range. So, this Bluetooth standard is helpful for a pair of wireless headphones and a voice-controlled smart speaker.

The support for Piconet Link Manager Mode is added. This enables devices to connect without taking turns to prevent interference.

It comes with the following feature enhancements:

Now let’s go through the description of prominent aspects of Bluetooth 5.3:

Specific devices spend much of their time in a low-duty cycle connection to conserve power. However, when higher bandwidth is required to support a particular application use case, then the connection parameters should be altered as fast as possible.

Connection Subrating speeds up the connection parameter updates with minimal delay. It conveys a better user experience and simultaneously retains the power-saving characteristics of low-duty cycle connections. Specifically, this can be useful in innovative medical devices like a smart blood glucose meter.

Bluetooth LE Peripheral devices can now offer a connected Central device having radio channel classification data. This data might be used by the Central device while carrying out channel selection in adaptive frequency hopping.

Channel Classification Enhancement enhances reliability and throughput by decreasing the odds of interference occurring at the Peripheral while the Peripheral and Central devices are not physically near each other. Using this feature, an example of the device can be a vibration sensor connected to the smartphone and an industrial rotating machine. The vibration sensor works as a peripheral device, whereas the smartphone functions as a central device. The condition monitoring staff experience interferences of varying magnitudes and from varied sources.

The standard extended advertising payload format’s AdvDataInfo (ADI) field can now be implemented in the AUX_SYNC_IND protocol data units (PDUs). These units are broadcasted when a device performs periodic advertising.

Now the Bluetooth Low Energy (LE) controllers might use the information in the ADI field to identify those packets that include retransmitted copies of identical or semantically correspondent data. Moreover, it removes such packets to avoid redundant processing on the nodes. So, the overall throughput is unaffected by retransmitted packets.

Encryption key sizes are settled upon by the connected devices’ controllers in Bluetooth BR/EDR. This change enables a host to notify its Bluetooth BR/EDR controller about the minimum acceptable key size through the Host Controller Interface (HCI).

This enhancement lets the Bluetooth BR/EDR controllers more efficiently notify the host of the outcome of key length negotiations. This new feature of Bluetooth 5.3 will be more beneficial to IoT applications like access control, portable medical devices, door locks, and commercial lighting.

Removal of the Alternate MAC and PHY (AMP) Extension:

The Alternate Media Access Control and Physical layer extension (AMP) enables a Bluetooth system to incorporate single or multiple secondary controllers and a primary Bluetooth BR/EDR controller. But in high-quality Bluetooth products, this extension is rarely found. Hence, the Bluetooth SIG has discarded this feature from the Bluetooth 5.3 specification. But this new version can qualify products that utilize AMP against a previous Bluetooth Core Specification version.

If you want to speed up connection parameters for high-duty cycle applications while ensuring power conservation, then Bluetooth 5.3 is a better option.

It offers increased reliability and throughput by reducing interference occurring at the peripheral. Redundant processing is avoided. For IoT applications, Bluetooth 5.3 is a better alternative.

If you want to have efficient transactions between two or more applications simultaneously with reduced latency, then Bluetooth 5.2 is a better pick. It is a better option for optimal signal transmission with reduced power consumption.

For flawless streaming on multiple synchronized streams, Bluetooth 5.2 is a better pick. LE Audio decreases consumption of power and bandwidth, which makes Bluetooth 5.2 a better option for high-quality audio transmission. 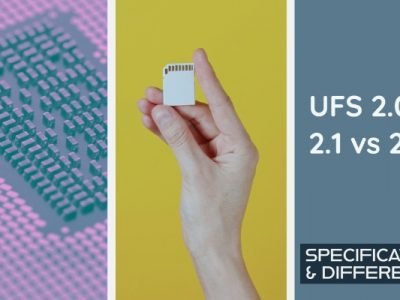 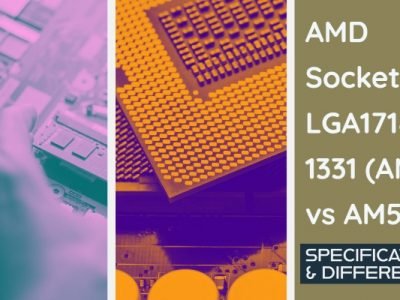