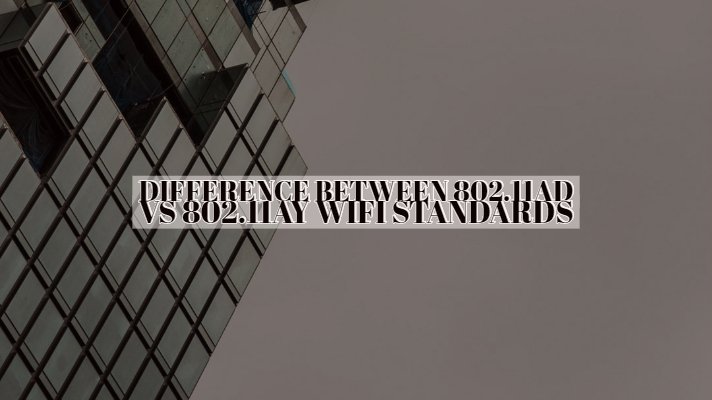 Well, if you go look searching for a new WiFi device in a year from now, you may need to remind yourself to check if the new device you are buying supports one more new standard. Yes, forward-looking is the need of the hour when you buy a new device. You would not want to find your device getting obsolete in just a couple of years once you buy it. A case in point is the new WiFi standard 802.11ay. What it is and what advancements does it offer? Here are a few inputs for your knowledge so that you would not find yourself lost when you go out to get a new device.

Well, you might have already guessed it. The 802.11ay is the new standard for high-speed multi-Gigabit WiFi connectivity. And yes, this is the forward-looking technology as things stand as of now.

Please note that the existing standard prevalent enough regarding WiFi standard on your new WiFi devices is 802.11ax and 802.11ac. Of course, we have been finding a few devices with the next standard 802.11ad just making their presence felt. It is quite heartening to see an effort to deliver an advanced version already.

The 802.11ay is the new standard in WLAN in the 802.11 series of WiFi standards. The service will offer a frequency of 60 GHz. You can expect a transmission rate of 20 to 40 Gbit per sec. The transmission distance, or what we generally refer to as WiFi range is around 300 too 500 meters.

The experts also believe that the new standard will also offer a mechanism for channel bonding and the upcoming MU -MIMO technologies. Launched in 2017, the technology is yet to go formal or mainstream as things stand as off now. Please note that the 802.11ay is not exactly a new standard, but the one designed as an improvement for the existing standard, i.e., 802.11ad.

The 802.11ay standard will be offering a maximum bandwidth of 8.64 GHz (bonds four of 2.16 GHz bandwidth channels together).

Well, for most of the internal functionalities, the existing standards like 802.11ac and 802.11ad would be sufficient. They are quite robust as things stand as of now. However, the improved range or transmission distance may have a significance in improving the performance.

The 802.11ay would be the standard that will help you get rid of the ethernet cord forever. With the range of 300 to 500 meters, you would be able to run all your systems straight with one WiFi connection. The 802.11ay standard will provide excellent bandwidth and plenty of it for every desk.

The standard can also find a great application in areas where point to point or point to multipoint transmissions. This can be one of the excellent options for the scaled-back fiber rollout plans from Google and other players. A few other areas that it may find itself being utilized would include offering the connectivity to VR headsets in addition to the options like server backups and cloud applications which would need low latency IO. Qualcomm has already begun rolling out the best choices in that direction.

Who is developing the WiFi 802.11ay? Well, the task force working with IEEE includes a few prominent names from the chipset and equipment industry. Of the different members of the group, Qualcomm has come up with the new launches quite recently.

Qualcomm has recently started shipping the new family of 60 GHz WiFi chipsets. These chipsets have been targeted at both mobile and other infrastructure applications. Qualcomm states that the standard will supplement the currently used WiFi standards of 2.4 GHz and 5 GHz.

While the routers and mobile phones are currently using the 2.4 GHz and 5 GHz bands, the 60 GHz would be powering the high-speed, short-range environment. Qualcomm seems to be targeting the VR headsets with wireless connectivity and high definition streaming functionalities. If the claims from Qualcomm spokesperson are to be believed and come to reality, the chipset and the standard should support up to 10 Gbps of throughput. However, under practical conditions, we would expect a performance of around 7 Gbps.

Given the fact that the WiFi speeds are bound to reduce over the increasing distance, Qualcomm expects its chipsets to provide speeds up to 4.6 Gbps at a distance of around 50 meters. However, the actual rates you would get may be dependent upon the types of obstructions you may come across. It should be understood that the 60 GHz band of radio waves can be more susceptible to blockages. The obstructions would block them while the more common standards like 2.4 GHz and 5 GHz tend to move beyond the walls and other obstacles.

The new launches from Qualcomm are possibly targeted at the fixed wireless access points like we already mentioned in the above discussion we just had. They also have chipsets aimed explicitly at the mobile applications.

Well, those are a few inputs into the upcoming 802.11ay standard of WiFi. It should be understood that it is just the beginning for the standard. Though the standard has already been finalized and made available, it may take a while till the technology makes itself felt in the mainstream.

Qualcomm is coming up with more commercial announcements next year. We would expect active visibility of the standard by that time. However, it should also be noted that the ay standard is yet to receive simplified branding from the WiFi Alliance. The WiFi  802.11ac has been branded as WiFi 5, while the 802.11ax will be branded to WiFi 6 shortly.

Anyhow, now that we have already begun seeing the chipsets with the new 802.11ay have already been launched and made available for the device manufacturers, we would expect a few practical applications already starting using the new 80.2.11ay by the middle of next year.

The world is moving toward becoming wireless. And the best piece of technology that can be helpful in that direction include WiFi or WLAN as it is technically referred to as. But, the fact remains that we are yet to experience the best WiFi experience. There have been several standards of WiFi connectivity have been emerging, but still, we are still a long way to go. In that context, it may be a good idea to focus on the two best standards in WLAN that are meant for long distance connectivity. Yes, we are referring to the 802.11ad and 802.11ay.

Well, the complicated nomenclature for the WiFi standards has been quite complicated and confusing. Well, jokes apart – the 802.11ad is a new WiFi standard in the 60 Hz spectrum. Most of the WiFi communication today occurs on the 2.4 GHz and 5 GHz. You can have excellent performance and speed of 7 Gbps when compared to the traditional speeds of 3.2 Gbps as available on the conventional standards like the WiFi 802.11ac.

Technically speaking, it is the multi-gigabit WiFi technology that can handle more data and bandwidth. This much of the data will be the most needed. You would be able to download and share 4K videos in a few seconds! This will also help you access the cloud content in real time.

The 802.11ay is the next standard in the 60 Hz WiFi transmission and is set to replace or work as an upgrade to the “still too be available” 802.11ad. The WiFi 802.11ay is set to offer better speeds and more extended range of transmissions.

The ay standard would be an enhancement to the ad and should work as a natural upgrade. The upgrade would offer you an excellent improvement both in terms of speed and range improvements.

A new standard in the 802.11 range of WLANs, the 802.11 ay will be available in the unlicensed 60 Hz space. It will offer you a transmission rate ranging between 20 and 40 GB per sec. The real improvement will be in the realm of transmission distance or the WiFi range. The standard will also support the channel bonding feature and support Mu- MIMO technologies. Please note that the ay will not be a new standard, but will be a natural upgrade for the ad.

The service offered by the ay standard in the 60 Hz WiFi segment is not new but will provide an upgrade for the existing ad standard. That would mean it is nothing like whether you will be choosing between the two standards. The ay will be a natural upgrade for the ad standard, and as such rather than terming it as the difference between the two – it would be practical enough to think about what improvements can we find on the ay standard in comparison to the ad.

Having said that, let us check out the improvements proposed to the ad standard by ay.

Another improvement that you would be able to find on the ay standard in comparison to the ad standard would be an improvement in the transmission distance. While the 802.11ad can offer you a range of 30 to 40 feet, the 802.11ay standard makes it possible to opt for a range of almost 100 feet. The data transmission rates supported by the ad standard is around 4.6 Gbps, while the ay standard takes it ahead to approximately 20 to 30 Gbps. While the transmission range offered by utilizing 11ay to 11ay setups can reach up to 100 feet, development of the additional technologies like MIMO and channel bonding, it should be possible to achieve speeds close to 200 Gbps. Experts even claim that you can also reach the transmission ranges of up to 1000 feet.

The Future of the 60 Hz WiFi standards

Well, the 60 Hz WiFi standards have one fundamental issue – they can not go beyond walls. Well, what we mean is they will not be able to penetrate the walls. It does stay in the room. Even when you may be able to achieve the transmission ranges of 1000 feet or even beyond, it may not be a smooth ride as such.

Possibly that should explain why the technology and the standard have not been able to move ahead in spite of the developments. IEEE seems to understand the issue and is working towards sorting out the problems.

And yes, a constant comparison of the two standards – we repeat once again that the 11-ay I update to 11-ad can be summed up as here below.

Well, the 802.11ay still needs to take off. We would expect IEEE to make it sure that the 802.11ad would be made relevant enough. That would help in defining the 802.11ay standard in a better manner.

Developing two incomplete standards may not be a good idea and can be detrimental to the success of the technology and its further innovation. What would our WiFi enthusiast think about it? Share your thoughts with us.

Micro SD A1 and A2 Class Difference? Best Class A2 Micro SD Cards