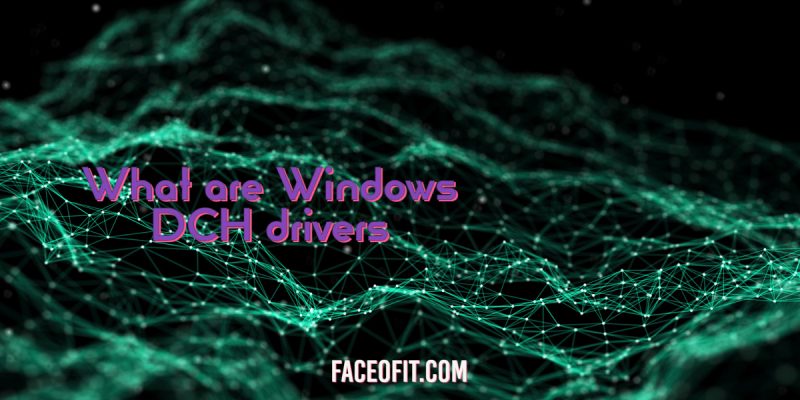 The Windows DCH drivers, also known as Windows Universal drivers, are one driver package that assists you in installing your requisite drives relatively quickly and through simple steps.

DCH drivers can be a great option to help you easily use them with different vendor hardware and Windows 10 / 11 environments.

What are Windows DCH drivers?

The Windows DCH drivers are the Declarative Componentized Hardware supported apps drivers. They are also referred to as Universal Windows drivers.

They let the developers create one driver package for Windows 10 / 11 that works on all devices, including laptops, desktops, tablets, and embedded PCs, along with practically any compatible devices.

Since the driver works on all the environments, you do not need to have separate drivers for separate devices and platforms.

The name of the driver package itself should provide you with a good idea about what it does.

The functionally of the driver itself isn’t different between the DCH and standard version, just the method of installation.

They also install and run on other editions of Windows 10 and 11 that share a standard set of interfaces.

DCH-compliant driver binaries can use KMDF, UMDF 2, or the Windows Driver Model (WDM).

The base driver includes all the core functionality and shared code. The optional component packages can have customizations and supplementary settings.

Note: You can’t rollback to standard drivers after installing DCH ones, at least it is not recommended as DCH drivers are not backward compatible and you may face severe issues doing that

Functionally, there is no difference between NVIDIA’s Standard and DCH drivers. While the base core component files remain the same, the way, DCH drivers are packaged and installed differs from previous (Standard) drivers.

When directly comparing the two driver types, the DCH driver package has a smaller size and a faster installation time than the Standard package.

Will this have any impact on my Dell PC?

Microsoft has made it mandatory to implement and develop DCH drivers. Irrespective of the developer or manufacturer, anyone developing Windows drivers should opt for the DCH drivers.

Dell provides the drivers for all the devices manufactured by it. The drivers and driver packages are available on the official support page.

The background updates and development of the drivers will gradually change to make the Windows 10 drivers change into DCH drivers.

If you are someone who regularly updates your Windows 10 versions and the drivers, then you would not have any issues whatsoever.

How can I tell which NVIDIA Windows Driver Type is installed on my PC?

To confirm the type of system you have, open the NVIDIA Control Panel ->, select “System Information” from the bottom left-hand corner, -> locate Driver Type. The following text will show if the driver type is DCH or Standard.

Will you be able to roll back a Legacy driver?

Most software and hardware vendors discourage you from returning to the legacy driver once you have upgraded to the Windows DCH driver.

A host of vendors claim that it is a highly complex process to go back to the legacy driver and can involve a lot of issues that can even result in system instability.

If you still think you need to roll back to the legacy version, it may be advisable to contact the vendor directly so that they can be helpful in letting you roll back the legacy driver. Under most real-world conditions, it is something not recommended.

Can you upgrade from legacy driver to Windows DCH driver?

Most of the time, upgrading a legacy driver to the Windows DCH driver can be possible.

Upgrading to the Windows DCH driver from the legacy driver is recommended once you have the DCH driver available.

However, there may be a few cases wherein you may need to uninstall the legacy driver in its entirety before installing the Windows DCH driver.

For the correct information, you may need to contact the vendor who will be able to provide you with the proper guide.