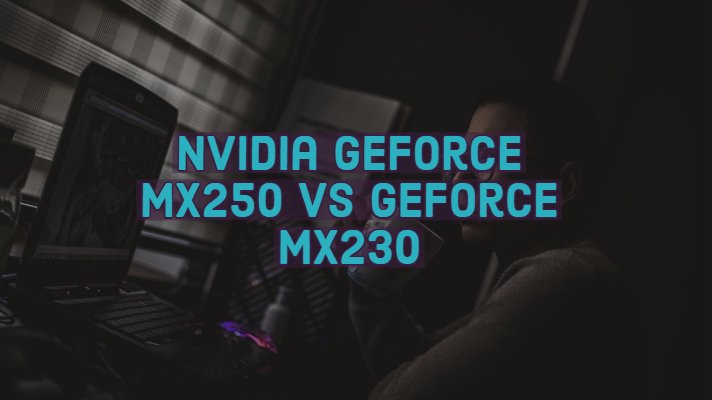 Are you wondering how Nvidia’s GeForce MX250 vs GeForce MX230 compares with each other? Read along to know more!

Nvidia has recently announced two new notebook GPUs. The launch of two new low-end graphics processors has been quite timely. Expected to be made available from April this year, the MX250 and MX230 have cropped up on the newly created product pages on the official Nvidia site. How do these two products compare to one another? We will carry out a comparison between the two low & mid-range parts from Nvidia’s mobile GPU lineup in today’s post.

The MX250 is a new low-end mobile laptop graphics processor designed for laptops, exceptionally thin and light notebooks. Some reviews suggest that the GPU is the relaunched MX150 with increased clock speeds.

This should possibly explain the use of Pascal GP108 chip on the new processor and the availability of 384 shader cores and a 64 Bit memory bus. The product will perhaps be available with two versions in terms of power consumption – a standard 25 Watt power envelop and a reduced 10 W TDP functionality.

The MX230 is also designed specifically for the entry-level laptops and most likely based on the Pascal architecture once again (but there is no real mention about the same). We would expect the new GPU to offer the same functionality as on the older GeForce MX130.

There is no explicit mention of the exact specification for the new GPUs on the product pages either. We may need to update the post later when these details surface on the website, or as soon as these products are launched. The site also mentions the compatibility with the display standards like DirectX 12, Vulkan 1.1, OpenGL 4.6, and OpenCL 1.2.

Both GPUs are expected to offer the PCIe 3.0 interface and support the GDDR5 memory compatibility. Nvidia uses the Optimus technology for letting the laptops switch between the integrated and discrete GPUs as per the load requirements. Perhaps, the laptop manufacturers can make use the high clock speeds of the new GPUs in the functionality and thus opt for these new low-end GPUs.

Sadly enough, comparing the two new mobile GPUs may not be as easy as it might appear. It has more to do with a considerably lower level of information shared by the official website about these two GPUs launched by Nvidia.

The official specification chart does not mention any of the primary details like clock speeds, CUDA core counts, and ROPs. The only information shared by the product pages includes the fact that both the low-end GPUs are based on Pascal architecture which the company has stopped using on its new range of desktop-class GPUs and the compatibility with boost performance. The site mentions that they are compatible with GDDR5 memory.

Based on the little details we can figure out, here are the features and the comparison chart we can come up concerning the two new GPUs from Nvidia.

Please note that the description and specification as indicated in the above discussion needs to be taken with a pinch of salt. Since the product pages on the official website do not have access to any specific information on the site – at least as of now – our assumptions are likely to go wrong at a few specific pointers.

The two new processors compete with the integrated Radeon Vega mobile GPUs from AMD. Given the fact that AMD offers you graphics that has better gaming performance, it may not be an ideal option to opt for the new GPUs from Nvidia.

What is the significance of these GPUs?

It has always been observed that Nvidia’s low-end parts lag by one generation when compared to their flagship or high-end GPUs. That should possibly explain the low-end standard offered by both GeForce MX230 and MX250.

These two GPUs are not set to make a considerable benchmark crushing performance. But, given the fact that the previous generation of low-end GPUs from Nvidia supported GDDR3 memory, the option for GDDR5 on the new devices is indeed a significant development.

Having seen how the low-end graphics cards in the previous generations from Nvidia, we can expect it to be made available on the laptops shortly. Given the fact that the low-end graphics processors from Nvidia have traditionally used along with the Intel’s U series processors, it may not be long before we will witness laptops featuring these two new graphics parts on OEM laptops.

Well, that was what the new low-end GPUs from Nvidia have on offer. That comparison may not be perfect and ideal as there is not enough data available from the manufacturer itself. They have a specified clock speed, but it has been seen in the past that the information graphic processors from Nvidia have used a wide range of clock speeds based on the exact requirements of what the laptop manufacturers.

Do you have any information worthy of sharing with us when it comes to the two new graphics processors from Nvidia? If you want to share any information on the new Nvidia GeForce MX230 and MX250 with us, share your inputs through the comments section here below.