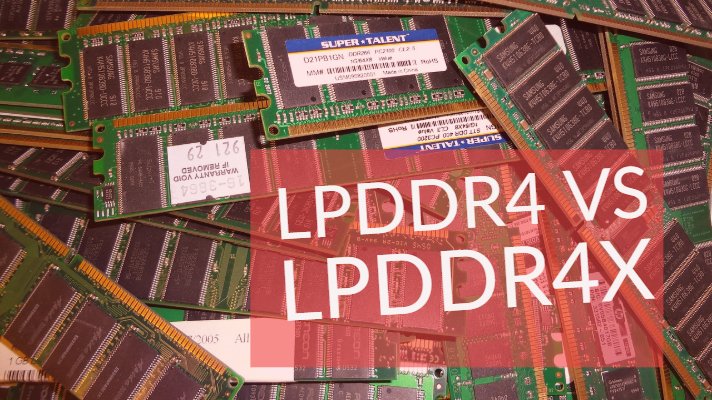 Memory management is an essential aspect of working with your smartphone. RAM is an essential element that handles your memory management in any device. There have been widespread improvements in the RAM technology over the years. From that perspective, the recently launched fourth-generation RAMs have been quite capable of handling memory management quite effectively. Even then, there has been doubts and confusions among the users about the exact specifications that these RAMs and their functionality. In today’s post, we will be talking about the LPDDR4 vs LPDDR4X and the differences between them.

LPDDR4 vs LPDDR4X – An Overview

In fact, both LPDDR4 and LPDDR4X are designed for offering the improved boost in memory speed and efficiency. Both of them are the fourth generation memory standards developed specifically for the mobile computing systems like smartphones, tablets, and notebooks.

The LPDDR4 is a massive improvement over the previous generation and planned for offering higher memory bandwidth. The LPDDR4X is, on the other hand, an optional minor upgrade to the LPDDR4 that can aid the manufacturers in attaining lower power consumption. While the LPDDR4 can in itself provide better memory functionality, the LPDDR4X enhances it even further thereby strengthening the memory capability and better battery efficiency.

But, before we can compare the LPDDR4 and LPDDR4X, let us understand what exactly LPDDR RAMs are. This can be helpful in knowing the two new generation RAMs in a better manner.

The LPDDR or Low Power DDR is also known as Mobile DDR or mDDR. These are specially designed Double Data Rate Synchronous DRAM for the mobile smartphones and Tablet PCs. The essence of LPDDRs lies in the fact that they are designed to consume low power – at around 1.8 Volts as compared to the 2.5 Volt RAMs used in other devices.

The LPDDR4, as should be evident, is the fourth generation of LPDDR RAM technology. In essence, it can be considered to be the DDR4 alternative for the mobile devices. While DDR4 has already been used in high-end PCs and similar systems, their mobile equivalent the LPDDR4 finds a vital use in smartphones and tablets.

The LPDDR4 improves the data rates by almost double when compared to the previous generations, the LPDDR3. You can get data rates as high as 3200Mb per sec with LPDDR4 as compared to the 1600 Mb per sec performance on the LPDDR3. The LPDDR3 had one channel, while the LPDDR4 opts for a two-channel design. It offers you 16 Bits per channel, thus providing you a total of 32 Bits. This can be helpful in lowering the power requirements of the core. The short data path ensures that the lower power consumption. This can be quite helpful in improving the operational speed and performance. The LPDDR4 offers a marginal improvement in the power consumption from 1.2 volts on LPDDR3 to 1.1 Volts on LPDDR4.

Another advantage associated with the LPDDR4 RAM is it can be manufactured on a smaller 20nm process. This helps in going for mass productions and can effectively reduce the price as well. 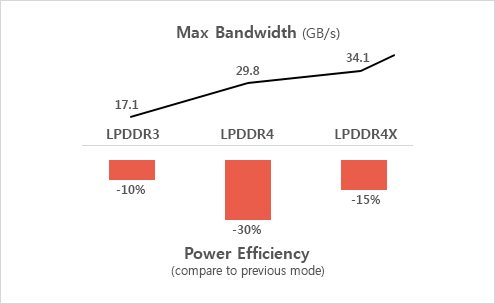 LPDDR4X is another fourth-generation Low Power DDR RAM developed for the mobile computing devices. In fact, there is not much of a difference between the LPDDR4 and LPDDR4X as such.

In fact, the LPDDR4X has been planned as a small optional upgrade to the LPDDR4 modules. The only difference between the LPDDR4 and LPDDR4X lies in the lower power consumption – still lower than that on the former. As we have already found above, the power consumption levels on LPDDR4 have been reduced marginally from the LPDDR3. This is further reduced with LPDDR4X.

The task is achieved using reduction in the I/O voltage to 0.6 Volts from 1.1 Volts as observed on LPDDR4. Other additional improvements on the LPDDR4X, as opposed to LPDDR4, are a single channel application, newer MCP, PoP and IoT packages.

In essence, the LPDDR4X reduces the output driver power to achieve this. You will be able to reach around a 20 percent reduction in the power consumption for the memory system.

What is the importance of LPDDR4X?

The expectations from the smartphone users have gone beyond what they used to be just a couple of years ago. In fact, the smartphones have been replacing every other device we have been carrying around, and thus the capabilities of the devices have increased beyond boundaries. This can have a severe effect on the battery capacity of your device.

This is precisely where the memory technology needs to be power efficient. And this is exactly what the newer technologies in memory management like LPDDR4X RAMs have been designed for. Smartphone manufacturers and users are looking for a battery backup of more than 10 hours. With the dwindling data charges and the need for constant connectivity has made our smartphones stay always connected. This Always On, Always Connected status has been one of the reasons for the development of memory systems with low power consumption.

Well, the significant difference between the LPDDR4 and LPDDR4X lies in the fact that the latter reduces the power consumption requirements by almost 55 percent, bringing it down to 0.6 Volts. Of course, there are a few minor differentiations apart from that, but in most aspects, the two siblings remain almost identical and offer similar functionalities. Moreover, these RAM modules can be manufactured on smaller systems and thus help you in reducing the associated costs. We expect the LPDDR4X to be available on almost all future generations of processors.