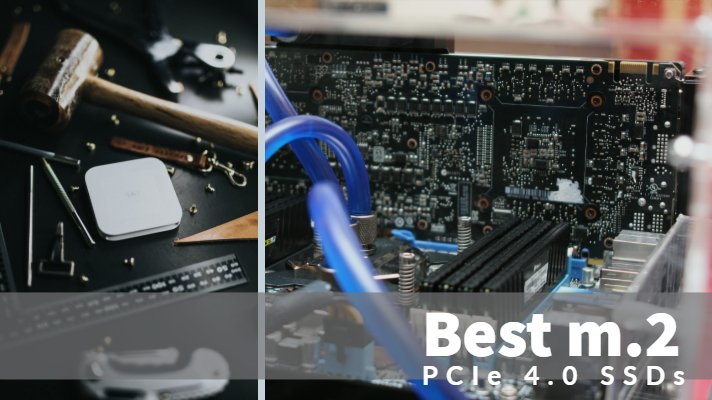 AMD has released its third-generation processors. The third-generation Zen 2 processors are designed to provide you access to the next-generation PCIe 4.0 controllers. This has made it possible for the manufacturers to launch their own SSDs with compatibility with M.2 PCIe 4.0 interface compatibility. Of course, there are not many options currently available. However, we will list out a few leaks and proposed launches so that you will be able to keep in the know of the new launches in the M.2 PCIe 4.0 SSDs.

The PCIe 4.0 revolution has been one of the enormous developments in recent times. Of course, previous generations of the PCIe have always been authoritative and efficient; the latest PCIe 4.0 has made it a competent connection interface. How does it differ from the previous generation PCIe 3.0 interface? Let us check out the significant differences between PCIe 3.0 and PCIe 4.0 in today’s post.

PCIe stands for Peripheral Component Interconnect Express. It is a standard for the connection established between the computer and the internal components. However, understanding the exact terminology may not be as easy as it may appear to be. The term PCIe is used for the expansion slots on the computer insides that accept the PCIe cards and other peripherals.

While there are several types of expansion slots available, PCIe has been considered one of the best and standard options. PCIe is specially designed for use with a high-speed, low latency performance. 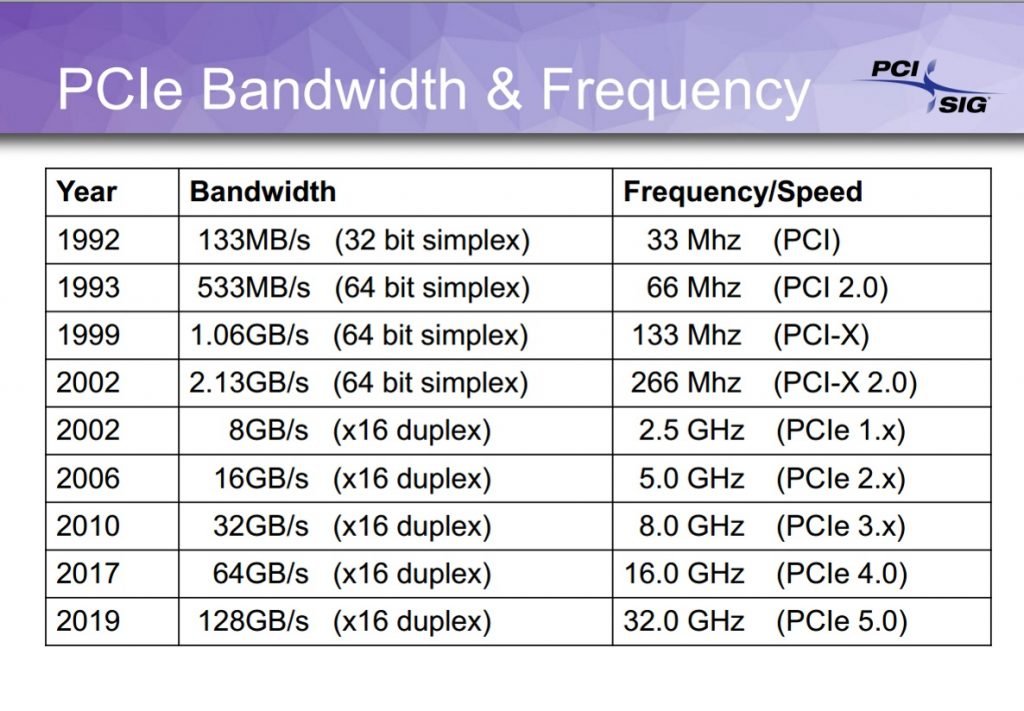 You might have heard of the different options for the PCIe configuration. PCIe x 1, PCIe x4, or PCIe x 8 are a few terms associated with the PCIe. Do note that these terminologies are common to almost all PCIe versions. The X in these nomenclatures would indicate multiplicity. It would represent the physical size of the PCIe. Thus it refers to the number of pins on the PCIe slot and the length of the interface.

A PCIe slot would be dependent upon the number of PCIe lanes it can provide you access to. The details for the PCIe slots and paths would be

Likewise, installing a PCIe card in any slot is possible. That means you can fit an X8 or X16 card into an X1 slot, but the speed will be limited to what is offered by the X1 generation.

The PCIe came into existence in 2005. It was when the PCI 1.0 was introduced. Here is a complete account of the PCIe interfaces –

PCIe 1.0 – Launched in the Year 2005. It was an improvement over the previous PCI version and introduced several advantages. Data transfer speeds of 2.5 GT/s

As we already explained in the above discussion, the PCIe 3.0 standard was introduced in 2007. The PCIe version 4.0 is the next option set to replace or offer as an upgrade to PCIe 3.0. The bandwidth provided by PCIe 4.0 is double that of PCIe 3.0. However, the standard is backward compatible with all the previous versions of the connection protocol.

The PCIe 4.0 version is designed to bring new options in meeting the high connection speed requirements in high-speed servers, gaming, graphics, and data centers. Compared to the 8 GT per sec transfer speed on the PCIe 3.0, the newer version provides you access to 16 G/Ts.

You will not find any of the encoding differences between Gen 3 and Gen 4 of the PCIe connectivity. However, the equalization offered by the PCIe 4.0 generation has been one of the enormous advantages.

What are the benefits that PCIe 4.0 offers? 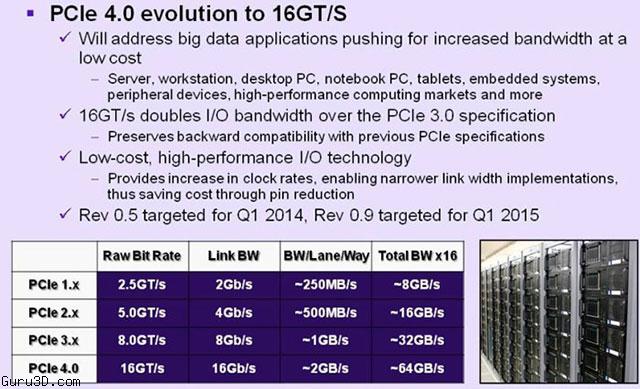 Some of the benefits provided by the PCIe 4.0 can be summed up as being

The Differences between PCIe 3.0 and PCIe 4.0

Do note that it may not be possible to check the exact PCIe slot your machine has. While some motherboards may mention it, some would not. You can check it with the online specifications on the official site or the renowned specification sites.

If you are interested in the comparison guide for the best among PCIe 3.0 and PCIe 4.0, the following table may prove to be helpful enough.

Do note that the older motherboards would not be able to access the new all PCIe 4.0 access as such.

And yes, PCIe 5.0 is just around the corner; what next?

Yes, as expected, the latest PCIe 5.0 has now been introduced. PCI-SIG has recently announced the launch of the next standard – the PCIe 5.0. And the significant change or improvement has been the increase in the speed of the connectivity. The next PCIe version will offer you 64 GB per sec in each direction on an x16 slot on PCIe 5.0. In comparison, the corresponding speed on the PCIe slot is 32 GB per second.

However, the PCIe 5.0 may not find the market right as yet. AMD and other motherboard manufacturers have been investing in the PCIe 4.0 already, and there may not be any chance of them jumping ship right away. We would not expect the launch of PCIe 5.0 as yet on a commercial scale. Until the infrastructure is ready for the new generation, it should be the reigning times for the PCIe 4.0 itself and PCIe 3.0 for quite some more time into the future.

That was it. The discussion here and a look at the emerging technologies should ideally give you an insight into the fact that it is the PCIe 3.0 and 4.0 that will continue working at its own pace.

There are not many actual launches announced when it comes to the SSDs with M.2 form factor and a PCIe 4.0 interface. We can hope for a launch and public availability really soon enough. Having understood that, we will check out a few launches that have been announced.

There is not much information made available about the exact time for the impending launch. The company went with a small paragraph about the new SSD and stated that it would be the first M.2 PCIe 4.0 SSD. The product was announced at Computex this year.

The new drive is designed to come with a 5 GB per sec speed to read and write operations. There is no specific information currently available about the exact launch of the product. Still, Gigabyte has indicated that it will be launched along with releasing the latest AMD platform.

The specifications currently available indicate these –

The SSD will come with Phison’s PS5016-E16 controller, though no confirmation is currently available on the exact controller option availability. The SSD will also come with the DDR4-1600 DRAM memory module to provide you with enhanced performance.

The information available right now indicates that the drive will need a sophisticated cooling requirement for efficient performance. The SSD will come with the full-body copper heat sink capability to assist you in this aspect. You can be assured of performance 40 percent better than the PCIe 3.0 SSDs launched earlier.

Like Gigabyte, Patriot Memory has also been inspired by the launch of the third-gen AMD processors and has decided to launch its own PCIe 4.0 M.2 SSD in line with most other manufacturers. The new SSD will be based on the same controller on the Gigabyte option – the Phison E16 controller.

The new SSD has not yet been named and is not likely to come up before late 2019 or early 2020. The company is still working on the firmware and heatsink and may not provide access to the exact specifications. The manufacturer aims to read speeds of up to 4.8 GB per sec and write speeds of around 4 GB per sec. Of course, nothing substantial has yet come up, and things will not be clear until the manufacturer finalizes the exact details when it is ready to launch the product. The new SSD is expected to arrive in capacities of 512 GB, 1 TB, and 2 TB.

This is the new PCIe 4.0 M.2 SSD that Corsair has already presented as the first PCIe 4.0 SSD from its stable. The SSD is designed to support AMD’s new Ryzen 3000 series processors and X570 chipset.

The drive is expected to be available from July 2019, and the exact pricing has not been revealed yet. It boasts a read speed of up to 4.95 GB per sec that should match Gigabyte and Patriot Memory’s other offerings. This moves ahead of the present generation of the fastest SSDs in the form of the Samsung Evo 970 Pro. The write speeds would be 4.25 GB per sec, which should be an exciting option as well.

The drive is expected to arrive with an integrated heatsink, but still, it’s an M.2 form factor effectively. Once again, like the ones on Gigabyte and Patriot Memory, you will find the same Psison PS5016-E16 controller powers the Corsair SSD.

What to expect from the PCIe 4.0 SSDs?

Well, these are just the three possible launches that are slotted for a near-future launch. However, it should be understood that this is just the beginning of the new PCIe 4.0 interface. We expect more manufacturers to join the bandwagon soon enough and launch their own range of devices and improvements over the next couple of months.

One of the major issues for an SSD is the high amount of heat generated. In the case of PCIe, the heat generation will indeed be more than that observed on PCIe 3.0 drives. The provision of a proper heatsink can definitely be an issue for the manufacturers, and we expect it to be one of the difficult tasks from the point of view of a feasible design. Of the products that we mentioned here, only Corsair seems to have given a thought to the inclusion of a heatsink in the design. We wonder what other manufacturers have planned for the proper dissipation of heat.

Well, the PCIe 4.0 configuration is here to stay and is expected to be the most important advancements from the point of view of data transfer speeds. With the imminent launch of the next-generation Ryzen 3000 series processors from AMD and the all PCIe 4.0 design that is expected to be the mantra for the manufacturers in the days to come by, it may be essential for the storage manufacturers to arrive at the best possible options to take care of the increased demand.

With that background, we would expect the manufacturers to arrive with a few excellent options in terms of M.2 PCIe 4.0 SSDs for your requirements.

Check out the best options that we have shared here. We promise to update this post when new SSD devices are made available in the days ahead.