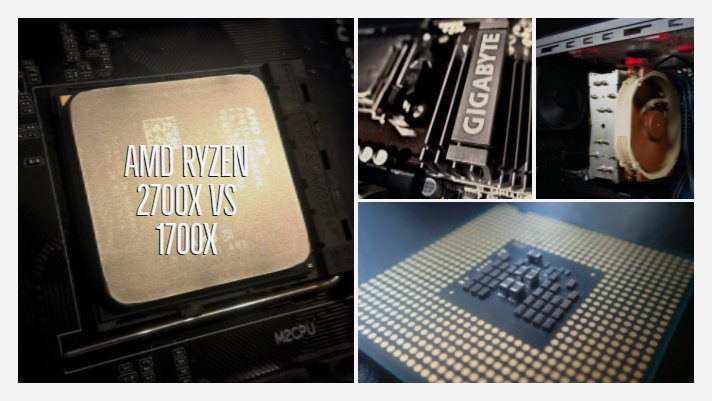 AMD has been a name to reckon with in the space for desktop processors. The year 2017 saw them launching the all-powerful Ryzen series of processors for desktops. The series was a success with its emphasis on higher core count, multithreaded performance, and affordable pricing. The lower price tag compared to Intel processors is what would make it an exceptional choice in its own right. 2018 is also bound to continue to bounce with the same zeal yet again. With the second gen AMD Ryzen series, the company is aiming to continue with the same track record once again. The AMD Ryzen 2700x is a case in point. How does it compare with the first gen Ryzen 1700x? Let us compare AMD Ryzen 2700x vs 1700x and find how they compare with each other.

The AMD Ryzen 2700x is a game changer with the introduction of 12nm architecture for the consumer CPUs. With lower price band, enhanced feature set and increased clock speed – the new series are rightly the best in the class processor you can opt for.

However, that should not mean the older generation of CPUs has anything inferior. Of course, AMD has hiked the specifications and in fact, outperformed the predecessor with the Ryzen 2700x, the older generation still holds enough value and compares ably with its successor.

If you are looking for the performance differentiation, the manufacturer claims that the second gen processor offers you a 16 percent enhanced performance. What’s more, you stand to gain an 11 percent lower power draw.

Well, the benchmarks released for the Ryzen 2700x show an excellent performance regarding gaming. The records indicate that the AMD Ryzen 2700x outweighs the predecessor Ryzen 1700x by around 10 percent. Some reports have also stated a maximum boost of up to 14 percent. What aids this performance enhancement? Well, the new second gen 2700x processors are the result of smart turbo feature coupled with the low memory and best in class inter-core communication.

The benchmark comparisons are not only based on the gaming performance alone. It does beat the Ryzen 1700x on other counts as well. If you are looking for the individual differentiation, you would be impressed with a 13 percent lead over the predecessor with the app startups. The service performance would be the best regarding photo editing by around 9 percent.

If you are looking for the best performer among the AMD Ryzen 2700x and Ryzen 1700x, a tabulated comparison can be the best you can go with. This sort of side by side comparison can be helpful enough in making an excellent choice between the two.

So, without going into many details and beating around the bushes, we will move ahead to check out the comparison of the processors in a table format.

Well, the AMD Ryzen 2700x has shown a practically better performance thanks to the enhanced features introduced by the new architecture and additional features. The 12 nm architecture should offer you an excellent performance in comparison with the predecessor that uses a 14 nm architecture.

In fact, the performance may not be much different if you are using it on a gaming or PC desktop, though there is a slight edge that the Ryzen 2700x provides you. However, if you are checking out a high-performance CPU for a workstation PC – the AMD Ryzen 2700x should be the real value for money.

The benchmark review of the desktop processors indicates a benchmark score of 102 percent for the AMD Ryzen 2700x, while the score for the Ryzen 1700x reads 89.9 percent. That should provide you a clear indication of the performance that the second gen AMD processor is capable of delivering.

The above comparison and the benchmark scores should indicate the improvements brought ahead by the AMD in its second generation Ryzen series processors. The Zen architecture has been improved upon, and it shows up in the performance enhancement.

The Ryzen 2700x can be overclocked across multiple cores, and it has been what has been sufficient for the enthusiasts of the PC enthusiasts. The liquid nitrogen as the cooling solution can indeed be the best and aids the overclocking most positively.

What would you think about the performance boost that AMD has given to its Ryzen series of desktop processors? The second generation AMD Ryzen processors have indeed been placed as the best performer and the real competitor for the Intel range of processors. Share your thoughts with us and enhance our experiences.