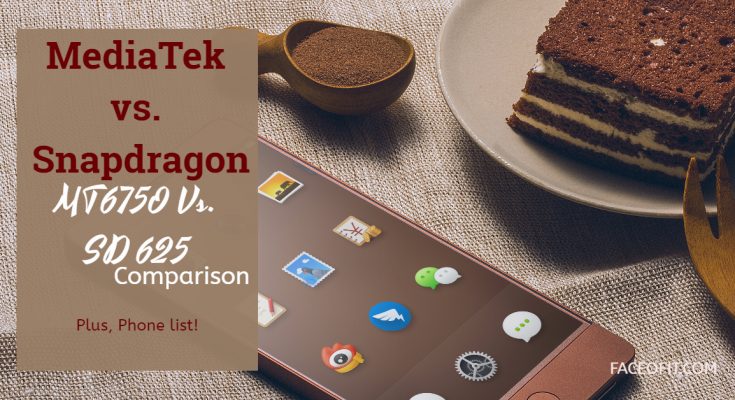 MediaTek MT6750  was launched in the second quarter of 2016 and just a few months after the launch of Qualcomm’s Snapdragon 625. But does the MediaTek 6750 beats the Snapdragon 625? Let’s find out.

Whereas, the Snapdragon 625 is also an eight ARM Cortex-A53 CPU with frequency up to 2 GHz. It uses a 14nm FinFET Process, a better GPU Adreno 506. That’s makes it better than the MT6750 regarding battery life. MediaTek MT6750 uses 28 nm HPM manufacturing process that’s why there is more power consumption in this SoC than the SD 625.

Moreover, when it comes to gaming Mali-T860 MP2 GPU used in the MediaTek MT6750 is not as good as the Adreno 510 GPU. MT6750 supports fast charging via the MediaTek PumpExpress 2.0 Technology while the Snapdragon comes with Qualcomm’s Quick Charge 3.0 support.

Snapdragon has 1080*1920 pixels maximum on device display support. Whereas, the MT6750 has a 720p maximum on device display support. MT6750 has a Dual Image Signal Processor and can support a maximum [email protected], [email protected]24FPS. On the other hand, Snapdragon 625 supports up to 24 MP camera with dual image sensor processor. You are intelligent enough to find out which one wins here.

Both the processors come with LTE support in both SIM. Let’s compare them to the GeekBench scores. While comparing the Redmi Note 4X and Lenovo P2 (powered by Snapdragon 625) with the Vivo V5 and Oppo F1s, Snapdragon wins the battle. It doesn’t only have better performance, but it is also more power efficient.

Do note that this is not a superset of all the phones, but only a sub set. The Android ecosystem is vast and making a full list can sometimes be difficult.

We hope you like our MediaTek MT6750 vs. Snapdragon 625 comparison. For any questions or suggestions, feel free to drop us a comment below.

Affiliate Disclosure: Faceofit.com is a participant in the Amazon Services LLC Associates Program. As an Amazon Associate we earn from qualifying purchases.
Previous PostBest AMD A320 Motherboards For Quad Core Ryzen 3 Pro 1200 & 1300X Next PostList of Intel Optane Ready Motherboards on Z270 B250 & H270 Chipsets