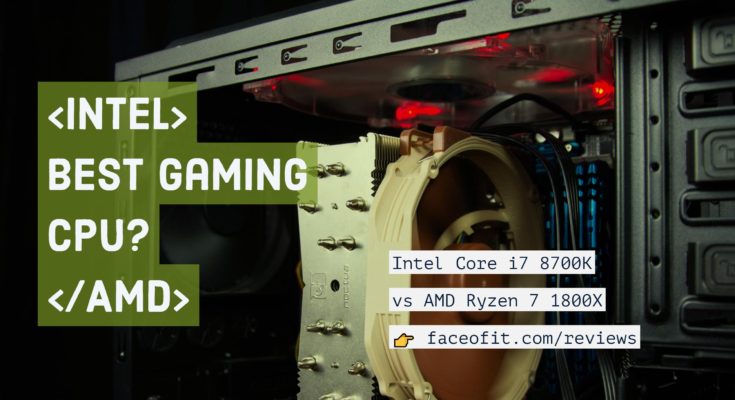 In today’s post, we are going to compare the best of two rivals AMD and Intel. Intel Core i7 8700K vs. AMD Ryzen 7 1800X, let’s find out which one will be the better option for you. Till date, Ryzen 1800X is the best mainstream desktop processor from AMD and so is the Core i7-8700K coming out of the Intel factory. 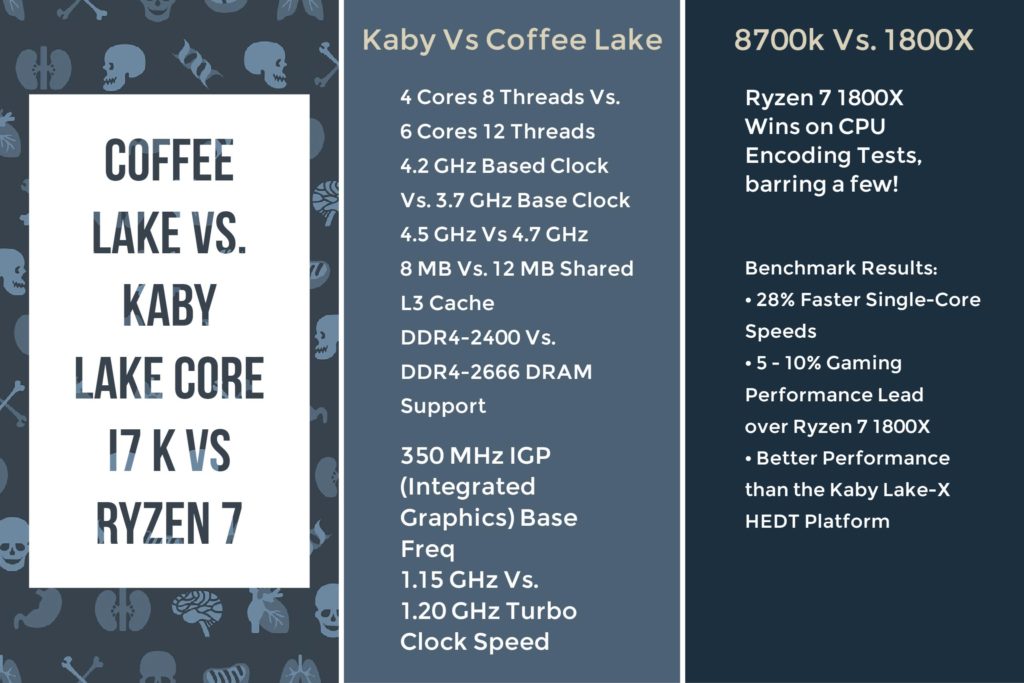 It is unlocked CPU, so overclocking can be comfortably done, thanks to Intel’s Turbo Boost Technology 2.0, the Core i7-8700K can reach a frequency of 4.7 GHz. Core i7-8700K is built on the 14nm++ process which is a lithography process optimization. It features a total of 12 MB shared Level 3 cache memory.

Coming to its rival, team Green, AMD Ryzen 7 1800X. Ryzen 7 1800X is slightly more expensive but also offers better performance in some benchmarks, especially in multi-threaded workloads. It is an 8-core, 16 threads CPU with a slightly lower base clock speed of 3.6 GHz and max turbo core speed of 4 GHz.

Ryzen 7 1800X is also an unlocked CPU and can be overclocked and monitored easily via the AMD Master Utility tool. AMD calls it the Pinnacle of desktop processing power. Ryzen series processor also comes with AMD SenseMI technology that gives them the ability to learn and adapt (fetch and branch predictions) the features that help them to customize its performance as per application demand. AMD Ryzen 7 1800X is Virtual Ready (Premium).

The Intel Core i7-8700K comes with an integrated GPU, whereas the Ryzen 7 1800X does not. The IGP on the 8700K supports maximum resolution up to 4096×2304 at 60Hz. It also supports Intel Optane Memory that might be useful to speed up the system a little more. Intel Core i7-8700K is cheaper, works great in games and single threaded workloads. However, Ryzen 7 1800X is more potent on multi-threaded workstation workloads.

Here is a quick side by side spec comparison table:

In contrast, the AMD Ryzen CPU’s support is based on DPC and the type of memory. On the motherboard front, AMD promises long-term support for its Socket-AM4 platform, whereas Intel is using a new LGA 1152 Z370 chipset which unfortunately is not backward compatible.

Intel’s early release of the 8th Generation Coffee Lake CPU’s confirms the fact that they were aware of the performance improvement of AMD’s Zen architecture and team blue was ready.

Apart from the new Z370 platform and incompatibility with the previous generation of Z270 motherboards, Intel fans should rejoice the performance that the new platform provides.

We hope you like our article on Intel Core i7 8700K vs. AMD Ryzen 7 1800X. If you want to share any feedback, please do so by commenting down below.

Affiliate Disclosure: Faceofit.com is a participant in the Amazon Services LLC Associates Program. As an Amazon Associate we earn from qualifying purchases.
Previous PostWhat are SSHD Drives and The List of Best 2.5” SSHD drives for Laptops Next PostARM Cortex A75 vs Cortex A72 Specifications Comparison and Phone List