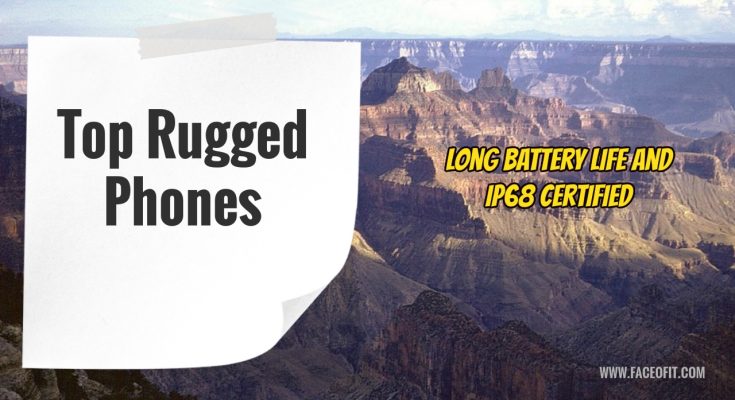 Rugged waterproof phones (or smartphone) is a good choice when you have to deal frequently with environmental hazards. Below is a list of best-rugged phones with military grade protection. These phones are dust proof, waterproof, and shockproof. Rugged phones can bear extreme temperatures and vibrations.

Below are some of the best rugged waterproof phones that stand ahead from rest of the phones during our testing. This post comprises of three rugged smartphones and five basic keypad rugged smartphones. So let’s get started.

Even though these mobiles are waterproof, try not to dissolve them in chemicals and other solvents, as the chemicals may react with the cellular components. So without wasting much time let’s move on to the list of best-rugged mobiles. 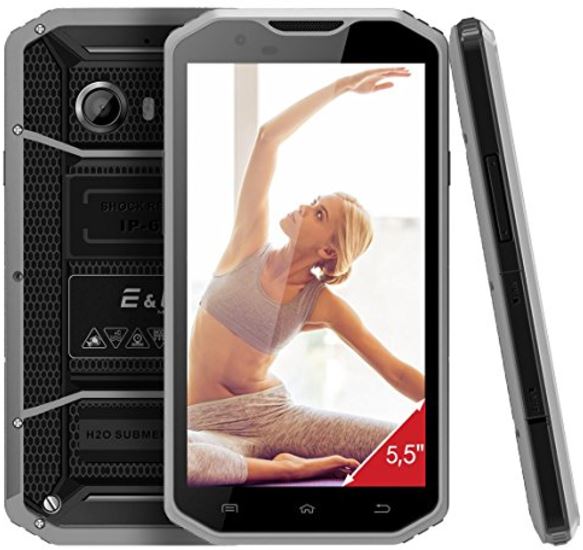 MediaTek MTK6753 Octa Core 1.3GHz along with 2 GB of RAM ensures that your phone doesn’t lag while multitasking and playing games. It comes with 16 GB internal storage that can be extended up to 128GB via dedicated card slot.

This rugged smartphone comes with 8 MP autofocus primary camera and 5MP secondary camera. The camera comes with dustproof feature along with military grade protection. 3000mAh battery provides full day backup. It has an IP68 rating which allows this phone to survive up to 1.5m for 30 minutes in water. 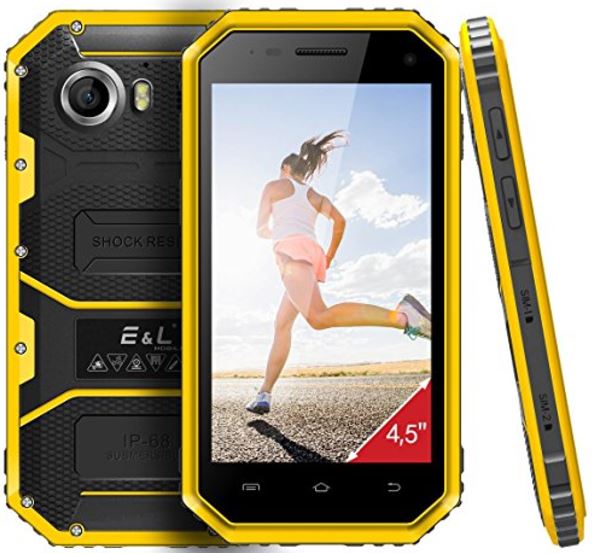 The second rugged Android smartphone is again from E&L. This smartphone comes with an IP68 waterproof dustproof certificate. It has 4.5 Inch capacitive touch screen with corning gorilla glass 3 protection. It runs on Android 6.0 operating system. It has Mediatek MTK 6735 Quad-core 1.0 GHz processor with 1 GB RAM and 8GB ROM.

For photography, it has dust and waterproof 5MP primary camera and 2 MP secondary camera. Considering price, camera quality is amazing. Photos taken by selfie camera are bright even in low light. Even after having high-grade shock resistant TPU material is just 13mm thick which gives it a smart look. It is a dual SIM “Unlocked” smartphone so that you can enjoy AT&T and T-Mobile Networks. 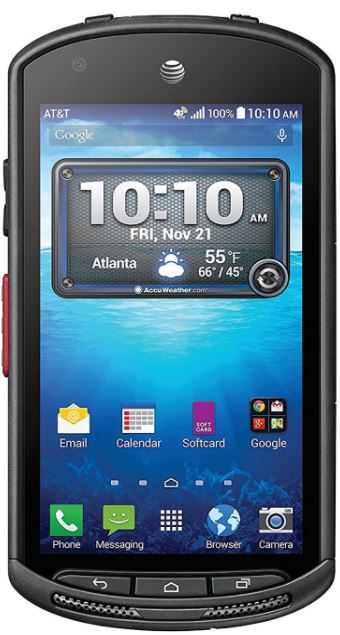 Kyocera DuraForce E6560 comes with 2 GB RAM and 16 GB internal storage that can be extended up to 32 GB via micro-sd. While dealing with dust and water make sure you cover the charger/data port, audio jack, and card slot properly. Keep in mind that this phone is fresh water or tap waterproof, but it doesn’t provide protection from detergent, beverages and chlorinated water.

It has eight hardware buttons, five on the side panel and three below the display. It has 8 MP primary and 2 MP secondary camera. A Li-ion 3100 mAh non-removable battery power up this phone. Hardware and performance of this rugged phone are good. But when it comes to ruggedness it is not as good as the above two smartphones. 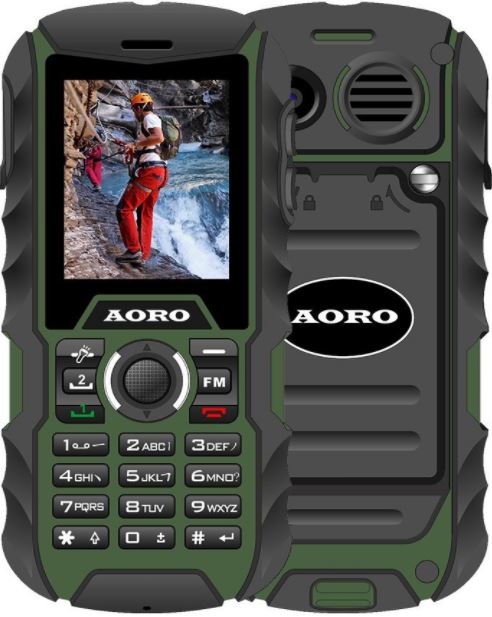 Now we have come down to the basic keypad phones. N.ORANIE AORO comes with IP68 waterproof and dustproof feature.  It is a six level dustproof spec phone that completely ensures protection from dust. 8 level waterproof protection gives protection from water within specified pressure limit. According to the company, this phone will be okay when falling from a height of 5 meters.

It has Bluetooth 2.0, radio and LED torch.  It comes with two batteries (each 2000mAh), each battery gives about 14 to 15 hours of calling time. It is a dual SIM phone.  N.ORANIE offers a 1-year warranty on this phone.  It will work with At&t and T-Mobile with 2G Network, But it will not work with Verizon and Sprint.

In the sales package, you will get the rugged mobile phone, two 2000mAh batteries,  one universal android cable, American standard charger, and a 3.5mm earphone. It features a 2-inch display with a resolution of 176 *220 pixels. 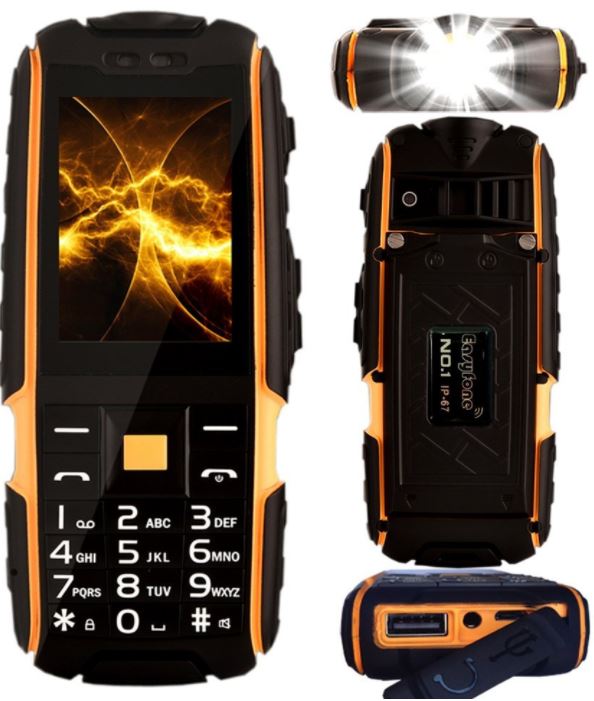 Easyfone Multifunctional rugged basic keypad phone is on the fifth place in this list. It comes with military-grade specifications for protection against extreme dust, temperature, and vibrations. It has a giant 4800mAh battery that gives excellent backup. Its battery can also be used as a power bank function that can be used to charge other smartphones and even tablets.

A tactical flashlight on the top side of the phone has three presets to control light intensity and illumination. It is a shockproof, dustproof and waterproof phone and comes with an IP67 certificate for water resistance. It features a 2.4 inch LCD with 240 * 320 pixels resolution. Display colors are quite bright and easy on the eyes.

It has 0.3 MP primary camera on the rear side and Bluetooth 2.0. It supports up to 8 GB of micro SD card. You can play music and watch videos in 3GP format. Moreover, it also has FM. In the box, you will get Easyfone rugged phone, headset, USB charging cable, Nano SIM adapter, and screwdriver. Easyfone comes with 1-year warranty.

Samsung Convoy 3 SCH-U680 is a flip type rugged phone. It is a rugged phone built to strict military specs which stand up to shock, extreme temperatures, dust, and humidity.  It features a Dual microphone with noise cancellation technology that lets you communicate clearly without any distortion.

It has 480 MHz processor along with 256 Mb RAM, and 512 MB ROM ensures a lag-free experience to the users. It has a 2.4-inch main screen and 1.3-inch secondary display. For basic photography, it has 3.0 MP CMOS camera. It is powered by a 3.7 V Li-ion 1300 mAh battery that gives you above average battery backup because it is a basic phone.

For entertainment, it can play music and videos too in MPEG4 (MP4) format. You can use Convoy 3 voice command feature to call, send messages and pictures, redial a number, or look up for a contact. Samsung offers one year warranty for phone and six months warranty for the accessories.

Vkworld Stone is the 7th best rugged waterproof phones with a basic keypad and phone functionality.  It features an easy to type but strong keypad with a dustproof and waterproof design. It has a physical keypad with a sturdy design and a Dual LED light. It has a 2200mAh battery for a long battery life. For basic imaging, it has 0.3 MP rear camera.

Compared to other rugged mobiles it is, this one is not that heavy. It only weighs 105 grams. It features a 2.4 inch to 240 * 320 pixels resolution.  It has an It supports 8 GB of internal memory, expandable by up to 32 GB using a memory card. It can be operated in multi-language English, French, German, Italian, Spanish, Russian, and Arabic. In the sales package, you will get one phone unit, charger, nano sim adapter and warranty card. Vkwolrd gives one year warranty on this rugged phone. 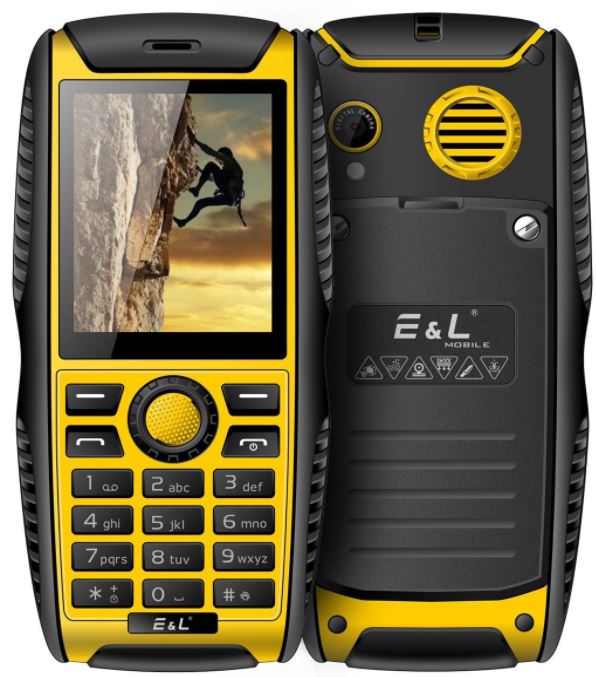 The last best rugged basic keypad mobile is from E&L. It has an IP68 waterproof certificate that gives safety up to 1.5 M for 30 minutes. It features a 2.2-inch display and on the rear side, it has 0.3 MP camera. It comes with 32 GB RAM and 32 GB internal storage capacity that can be extended up to 8 GB via external card.

To provide protection from scratches and shocks it has Corning gorilla glass three on display. E&L Proofings W3 is a highly rugged mobile when it comes to protection from dirt, sand, humidity, solar radiation, rain, vibration, and shock. Moreover, you don’t have to cover ports from caps and cover. It has 2000mAh battery that gives talk time up to 11.2 hours.

Affiliate Disclosure: Faceofit.com is a participant in the Amazon Services LLC Associates Program. As an Amazon Associate we earn from qualifying purchases.
Previous PostTop Phones With Optical Zoom with iOS and Android and Best Cameras Next PostTop Blackberry Phones With Android and Optional QWERTY Keypad