Home PC Hard Disk Drives What are SSHD Drives and The List of Best 2.5” SSHD drives for Laptops 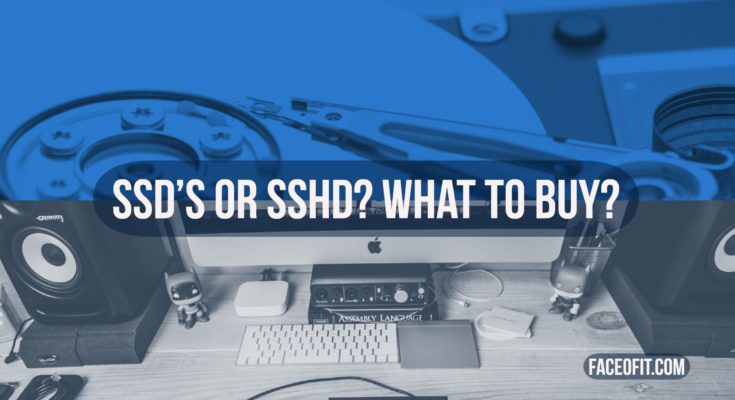 What are SSHD Drives and The List of Best 2.5” SSHD drives for Laptops

IGHard Disk Drives, PCComments Off on What are SSHD Drives and The List of Best 2.5” SSHD drives for Laptops

If you are looking forward to upgrading your laptop’s storage drive, there are many options rather than just the capacity. There are multiple types of storage available out there for your PC and laptops. The most popular being Hard disk drives and solid-state drives.

The former known for the massive storage capacity it offers and the later one for its impressive sequential and random read/write speed. How many of you are aware of the term SSHD? To know more, read along to find out the best 2.5” SSHD drives for Laptops currently available.

If you are someone who is into assembling dissembling computer components, you might know that SSD stands for solid-state drive, which is much similar to a massive capacity USB flash drive with comparatively impressive memory speed. Unlike mechanical hard disk drives, it does not have moving parts. Instead of magnetic platters, it uses memory chips (NAND).

SSHD stands for a solid-state hybrid drive. It is merely a traditional hard disk drive with solid-state storage built-in. It is usually 8 GB, more or less. Windows recognize the drive as single storage, and a controller chip is there to decide if the data is on SSD or HDD.

Why SSHD for your Laptops?

In desktops, you can just use multiple drives; some of them can be SSD and other spindle based HDDs. Most of the people install the operating system and massive programs on SSD’s where HDD is used for media personal data storage. This cannot be done on laptops, and you need to choose either one or the other type of storage for your notebook. The better option for laptops varies according to your priorities. For example:

As you can see, SSHD delivers better performance compared to conventional hard drives and saves a lot of money compared to solid-state drives. Thus, when you are not sure about which one to choose, you can always go with SSHD storage for your laptop.

Following is a list of some of the best 2.5-inch SSHD drives available for laptops. Here we go: 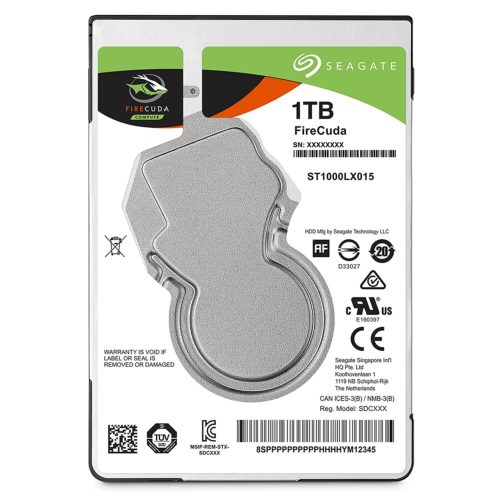 Within its high range and 2.5-inch criteria, it is one of the fastest hybrid storage available out there in the market. It is available in handy 500GB, 1TB, and 2TB variations. The maximum one is quite enough for storing up to 80x games with 25GB size. It uses flash acceleration technology that pumps uploading performance up to five times compared to traditional hard drive storage. Adaptive memory technology frequently identifies accessed data and allows quicker operations to be made. MTC or multi-tier caching technology is used that helps various applications to load files and directory trees faster. The following table summarizes some important specs: 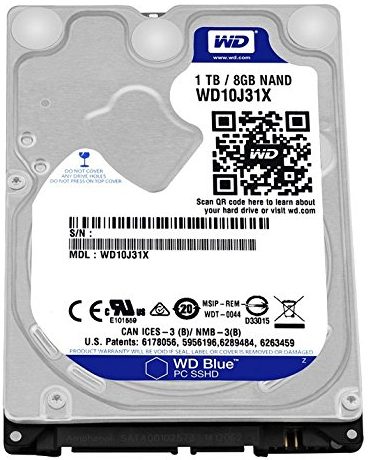 It comes with massive 4 TB of storage and delivers standard Solid State Drive [SSD] like performance with blazing-fast NAND flash storage of 8 GB. It claims to be up to 5 times faster compared to traditional 5400 RPM hard disk drives. It is suitable and compatible with the variety of applications such as gaming, system builders, creative professionals, and also power PC users who require a massive amount of storage and fast performance equally. When it comes to gaming, these hybrid drives reduce game loading time and loading between levels and also the time required for autosave. The amount of NAND storage is quite sufficient to maintain performance. Here are some important specifications: 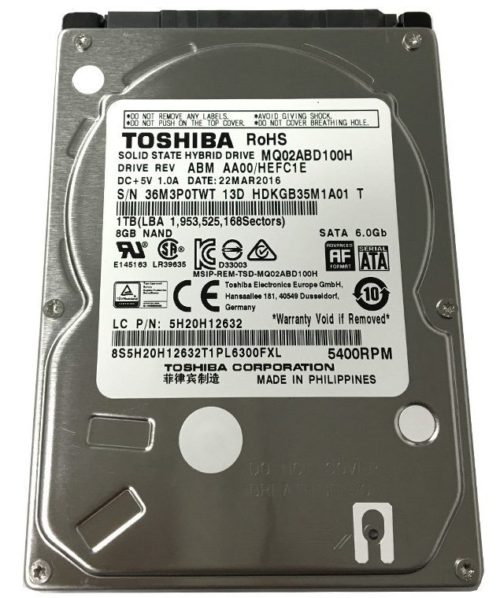 It is a multi-purpose SSHD that is compatible with a variety of devices, including laptops, Macbook, PS3, PS4, gaming consoles, etc. It is specifically designed for high capacity laptops. It has 8GB of NAND flash memory capacity and MTTF of 600,000 hours. Like an SSHD is supposed to do, it delivers the performance of an SSD and storage capacity of an HDD. It is equipped with various algorithms that help it learning access patterns of users. With the data acquired, the disk automatically decides which data to keep on the SSD portion and which on the HDD portion of the disk. It supports USB 3.0 and eSATA for external enclosures. You get three years of manufacturer’s warranty with the purchase. 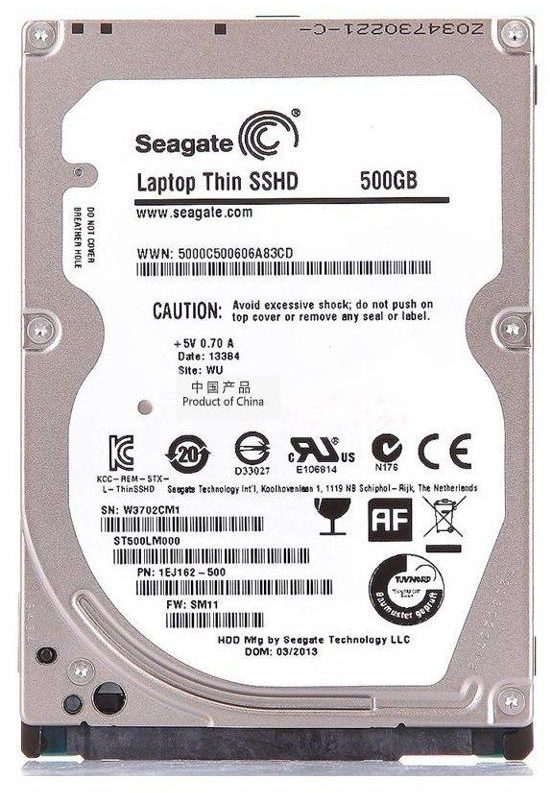 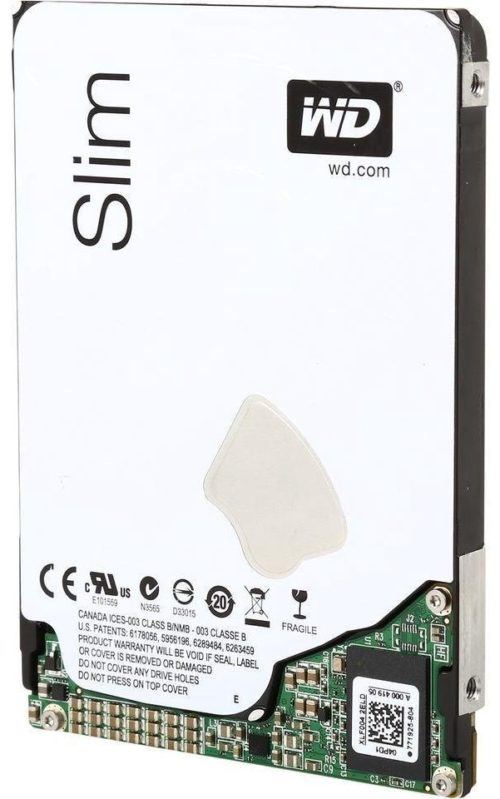 This drive comprises a significant amount of NAND flash storage and massive HDD storage in a single drive and helps the system take advantage of the best of both worlds. Using this drive will result in faster system boots, application loads, and enhanced responsiveness compared to traditional hard disk drives. It is compatible with most of the desktop, laptops, and PS3/PS4 gaming consoles. You can easily use it with Mac systems just as you do with windows one. When you cannot decide between an SSD and HDD due to several reasons, this is always a great middle option to go with. Following are some important specs: 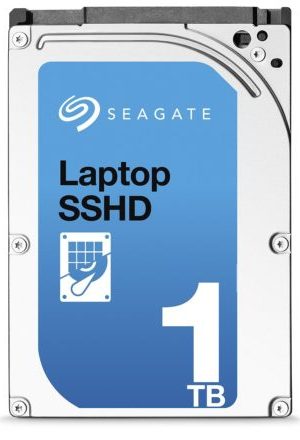 This drive will bless your system with impressively enhanced booting time, application loading time, and improved and much faster performance like an SSD does. It is perfectly shaped for your notebook laptops, desktops, Mac, and gaming consoles as well. Compared to traditional 5400 RPM hard disk drives, it delivers up to 4 times performance regarding speed and accessibility. The manufacturer recommends this model for gaming and performance laptops specifically. It is an easy way to upgrade your console up to 5 GB. The 8 GB of NAND storage with 64 MB cache is quite sufficient for handling any performance laptop. They are giving five years of limited warranty. Here are some important specs:

SSHD’s are a great cost-effective solution to a faster hard drive, unlike SSD’s. We feel that all mid-range laptops should come with SSHD’s right from the factory rather than an afterthought. Fingers crossed!

We hope you like our article on the best 2.5” SSHD drives for Laptops. If you have any questions or suggestions, feel free to use the comment box down below.